Audience understanding of the story is hampered by the BBC's habitual failure to report the aims of the BDS campaign. 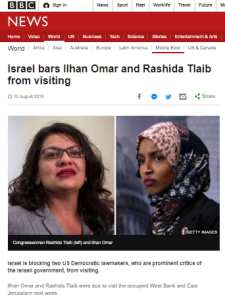 “Israel is blocking two US Democratic lawmakers, who are prominent critics of the Israeli government, from visiting.”

The following lines however indicated that the BBC is well aware of the fact that the two Congresswomen had no interest in visiting Israel as a whole.

“Ilhan Omar and Rashida Tlaib were due to visit the occupied West Bank and East Jerusalem next week.”

“Both have supported the boycott movement against Israel, but Israeli law allows supporters of the campaign to be banned from visiting.”

“Israeli law blocks entrance visas to any foreigner who calls for any type of boycott that targets Israel – either economic, cultural or academic.

The law attempts to suppress the “boycott, divest, sanction” movement, which has drawn growing support across Europe and the US.” [emphasis added]

Not only is that representation of the 2017 amendment to the ‘Entry to Israel’ law inaccurate (the amendment gives the interior minister leeway to make exceptions) but as usual the BBC did not clarify to its audiences that the Boycott, Divestment and Sanctions campaign (BDS) promotes the so-called ‘right of return’ for millions of descendants of Palestinian refugees which would lead to the elimination of the Jewish state and thereby deny the Jewish people their right to self-determination.

The report also told readers that:

“Ms Omar and Ms Tlaib have both been criticised for their stance on Israel – but have denied charges of being anti-Semitic.”

No effort was made to explain to readers why such charges have been leveled or to inform them of the problematic nature of statements made by the two representatives.

The BBC chose to uncritically amplify a statement from Omar while failing to inform readers of similar actions taken by democratic countries – including the UK.

“Ms Omar described Israel’s move as “an insult to democratic values and a chilling response to a visit by government officials from an allied nation”.”

Regarding the Congresswomen’s proposed itinerary, readers were told that:

“According to US media, their trip was meant to begin on Sunday, and would include a stop at one of the most sensitive sites in the region – a hilltop plateau in Jerusalem known to Jews as the Temple Mount and Muslims as Haram al-Sharif.

They also planned to visit Israeli and Palestinian peace activists and travel to Jerusalem and the West Bank cities of Bethlehem, Ramallah and Hebron.” [emphasis added]

According to that itinerary, what the BBC presents as “peace activists” are in fact political NGOs such as ‘Mercy Corps’, Amnesty International, Al Haq, B’tselem, DCI-Palestine and ‘Breaking the Silence’.

“The trip to the West Bank was planned by Miftah, an organisation headed by Palestinian peace negotiator Hanan Ashrawi.”

No background was provided concerning Miftah and its record of advocating the BDS campaign and glorifying terrorists.

The following day – August 16th – that article was replaced by another headlined “Rashida Tlaib rejects Israel’s offer of ‘humanitarian’ visit” which included much of the same content but also informed readers that: 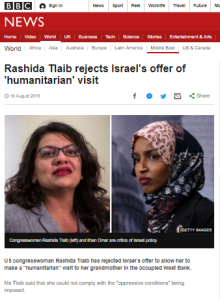 “…in a series of tweets on Friday, Ms Omar hit back at claims that she and Ms Tlaib hadn’t asked to meet with Israel’s government or opposition officials.

The Minnesota congresswoman said that, during their visit, they had planned to meet Jewish and Arab members of Israel’s parliament, along with Israeli security officials.

Among other plans, they had also intended to tour the West Bank city of Hebron with Israeli military veterans, she said.”

Readers were not told that those “Israeli military veterans” were in fact members of the foreign funded political NGO ‘Breaking the Silence’ or that the itinerary shows no evidence of planned meetings with Israeli Knesset members or officials.

“Ms Tlaib and Ms Omar have voiced support for the Boycott, Divestment, Sanctions (BDS) campaign – which aims to put economic pressure on the Israeli government – because of their opposition to Israel’s policies towards Palestinians in the West Bank and Gaza Strip.”

Obviously if – in line with the BBC’s public purposes obligations – audiences were to understand Israel’s decision not to permit this visit by two members of the US Congress, they needed to be accurately informed what the campaign supported by the women is really about.

However rather than provide that essential information, in these two reports the BBC once again chose to continue its long-standing policy of avoiding telling its audiences that what that campaign ultimately seeks to achieve is the end of Israel as the Jewish state.

BBC News claims BDS is solely about ‘a cultural boycott’

0 replies on “Superficial BBC reporting of Tlaib and Omar story”