The PA's London representative says there are two acceptable outcomes to the Arab-Israeli conflict but the BBC portrays the Palestinians as supporting just one.

Back in May, in a report concerning Palestinian rejection of the as yet unpublished US peace initiative, BBC News told its audiences that:

“It is unclear whether the [US] plan will be based on the so-called “two-state solution” – a long-standing formula for resolving the conflict by creating a Palestinian state alongside Israel, with Jerusalem a shared capital.

The Palestinians and most of the international community support this approach in principle, while the Israeli leadership is cooler towards it.” [emphasis added]

As was noted here at the time, the BBC has been promoting the theme of Palestinian support for a two-state solution at least since December 2016 – while amplifying the PLO’s interpretation of that shorthand.

…the BBC’s wording does not inform readers that an essential part of the two-state solution is the concept (repeatedly endorsed by the Quartet) of ‘two states for two peoples’ – a definition which would require Palestinian recognition of Israel as the Jewish state – and that Fatah and the Palestinian Authority have repeatedly refused to do so.”

So what really is the approach of the PLO/Fatah/Palestinian Authority clique to the idea of a two-state solution to the Arab-Israeli conflict? Earlier this month the University of Chicago’s ‘Pearson Institute’ held a conference in Berlin. One of the speakers was Husam Zomlot – currently head of the Palestinian mission to the UK – who readers may recall gave a briefing to BBC journalists just before the Bahrain economic workshop in June and who has been a regular contributor to BBC content. 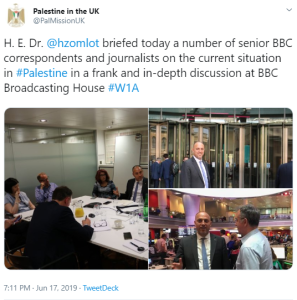 For those interested in the topic of how the PA promotes its selective narrative in the West – and the contradictions and falsehoods that lie behind that narrative – Zomlot’s contribution (from around 2:30:00 here) is worth watching in full.

But one section in particular (from 3:04:43) has gained attention on social media because it reveals what actually lies behind that BBC claim that the Palestinians support the two-state solution.

The second option is one person, one vote: one democratic, egalitarian state that provides for all of its citizens regardless of your language, your religion, your colour, your height, your width. A state in the meaning of a state. And I say it maybe on behalf of my Palestinian side: we will accept either. It’s not like we are obsessed. We are obsessed about a solution. But we know that the second option is a non-starter in Israel. We know that. And you know why? Do I need to dwell on it? Because Israel see us, the Palestinians, primarily as a demographic threat. Because the dream of establishing a state of all its citizens might be generations away. Because only few months after the Israeli state…nation state law that discriminated against the Palestinian citizens of Israel and deliberately told them that they can never have the right of self-determination – it’s exclusive to Jews. In such an environment to aspire to that is really to be almost like wanting to fight a heavyweight boxer when you are unable to even defeat a lightweight. And that’s why we are more in the area of possibility than desirability and from a possibility point of view we remain to be convinced that the two-state solution is still possible. And we remain convinced that it is the best course to the immediate future.” 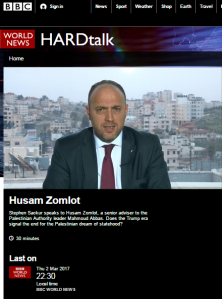 In other words, Zomlot is saying that although the Palestinians would prefer a more ‘desirable’ one-state option which would eradicate the Jewish state and bring an end to Jewish self-determination, they are prepared to settle in “the immediate future” for their partisan interpretation of a two-state solution which – notably – does not include recognition of Israel as the Jewish state because they consider all of Israel to be “rightly” theirs.

That of course is significantly different to way in which the BBC portrays the Palestinian position to its audiences. The problem is not that Palestinian officials such as Zomlot and Saeb Erekat do not get enough BBC airtime to explain their stance but that BBC journalists refrain from asking challenging but relevant questions such as why the PA’s interpretation of the two-state solution does not include recognition of Israel as the Jewish state.

BBC Complaints: inaccurate portrayal of Palestinian leadership is not a ‘significant issue’