The perpetrator of a stabbing attack on the BBC's home turf is described in language never seen in reports from Israel.

BBC reporting on the fatal stabbing attack in London on the afternoon of November 29th once again highlighted the corporation’s double standards on terrorism.

The BBC’s current editorial guidelines on ‘War, Terror and Emergencies’ (which came into effect in mid-July 2019) state: [emphasis added]

11.3.6 The word ‘terrorist’ itself can be a barrier rather than an aid to understanding. We should convey to our audience the full consequences of the act by describing what happened. We should use words which specifically describe the perpetrator such as ‘bomber’, ‘attacker’, ‘gunman’, ‘kidnapper’, ‘insurgent’ and ‘militant’. We should not adopt other people’s language as our own; our responsibility is to remain objective and report in ways that enable our audiences to make their own assessments about who is doing what to whom.”

As has been the case when terror attacks have taken place in the UK in the past, those guidelines were appropriately disregarded in some of the corporation’s reporting on the November 29th incident. For example: 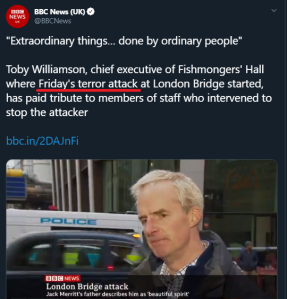 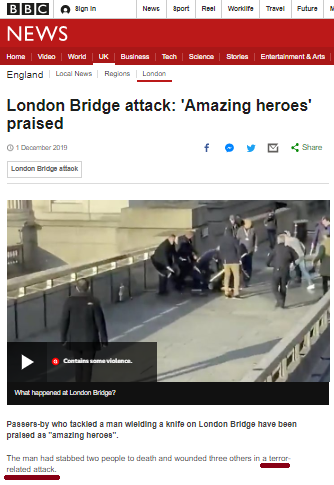 As regular readers know, the BBC has reported countless fatal attacks against Israelis using knives or other methods without using the words terror, terrorism or terrorist.

In April of this year BBC News’ editorial director stated:

“On the issue of terror and terrorism our guidance is clear. There is no definition of what is a terrorist attack and who is a terrorist. If we use the word we want to attribute it…”

“There is no agreed definition of what a terrorist is. It is disputed.”

“We want to be consistent.”

As we have noted here in the past, that double standard is evidence of precisely the type of “value judgements” which the BBC claims that its above editorial guideline is designed to prevent.

BBC claims attacks on Israelis in Judea & Samaria are “rare”

BBC finds a ‘working definition’ for terrorism in Europe

A new BBC ‘explanation’ for its double standards on terror