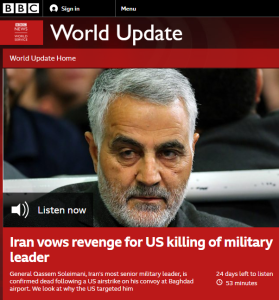 Damon: “I spoke to one of the loyal Iranian voices that we can reach in Tehran. He’s Dr Seyed Mohammad Marandi at the University of Tehran. He told me how important the General was to the people of Iran.”

Damon did not adequately clarify the meaning of that highlighted phrase and so audiences were unlikely to appreciate that they were about to hear largely unchallenged propaganda from a regime loyalist who has for years been rolled out to defend the Iranian regime in the English language media – including the BBC.

Marandi: “He’s very popular because he helped defeat ISIS and Al Qaeda in Syria and Iraq. Many believe that if it wasn’t for him in Syria the capital would have fallen to the extremist forces that were backed by Saudi Arabia and other countries of the region as well as the United States. And the same is true with Iraq. Iraq was on the verge of collapse and he went there and personally commanded troops in both countries to prevent the fall of these capitals to these forces and people in Iran believe that if these two capitals had fallen we would be fighting ISIS and Al Qaeda and other such groups inside Iran today.”

Damon: “The United States says he also led operations that killed many American soldiers. Do you accept that?”

Marandi: “I think it’s somewhat ridiculous for the Americans to blame Iran for their illegal occupation of Iraq and to deny the Iraqi people agency. The Americans helped create Saddam Hussein – they created the monster that they later destroyed. They imposed sanctions on Iraq where roughly a million people were killed. Then they invaded the country illegally with…and lied about weapons of mass destruction and alleged links to Al Qaeda. They destroyed the country and then after they helped create the mess in Syria by supporting extremist forces, those forces came into Iraq and the Americans refused to help Iraq when ISIS was advancing on the capital. So the United States is in no position to complain about anything in this part of the world.”

Damon made no effort to question or challenge that account.

Damon: “Why was Major General Soleimani so vulnerable? We all knew, didn’t we, that he was being monitored by the Americans very closely. Why wasn’t he protected?”

Marandi: “He was on an official visit. He entered the country through the Iraqi airport. There was nothing secret about his visit and he was met by senior Iraqi military officials who were also murdered [sic] by the US army. The Iranians believe that this is an act of war and the Iraqis believe that this is an act of war because they also killed a senior Iraqi military hero. And the Americans should not be fooled by the former Saddam Hussein supporters or ISIS supporters or American NGO people who are celebrating in Baghdad. We’ll see soon where public opinion in Iraq stands and how that will impact the US occupation in Iraq.”

Even that highlighted propaganda failed to prompt any challenge from Damon.

Damon: “President Donald Trump says he doesn’t want war and he doesn’t think Iran wants war because, to quote him, it would be very short. Do you think that’s right?”

Marandi: “The Americans will not win in any war in this region. Iran is not alone. Iran’s allies in Yemen, in Syria, Iraq, Afghanistan, Lebanon, across the board are on the ascendance and Iraqis themselves are outraged by this act of war against Iraqis. The murder of innocent Iraqi soldiers on the front line against ISIS by American troops. Iran is a very powerful country. Iran is not the Iraq of Saddam Hussein and the Americans are in a very vulnerable position and American allies in the region are very vulnerable. This is not a war that the Americans can win. But the Iranians will definitely respond to the United States and the Iraqis will definitely respond to the United States. There will be a heavy price to pay.”

Referring to one of Marandi’s ‘contributions’ to Iranian English language TV earlier in the day, Damon went on:

Damon: “I think you said on Iranian TV that all Westerners should leave the Middle East. What did you mean?”

Marandi: “The situation is very dangerous. Western citizens in the United Arab Emirates and in other countries should leave because the United States has bases in all these countries and Iraq and countries like the Emirates, Saudi Arabia are a part of the US war against the Iranian people [sic].”

Damon closed that interview there. Those four minutes of unchallenged Iranian regime propaganda (in which the attack on the US embassy in Baghdad and other relevant events were completely whitewashed) were promoted separately by the BBC World Service and embedded into the BBC News website’s ‘Middle East’ updates – without any indication to audiences of Marandi’s regime connections. 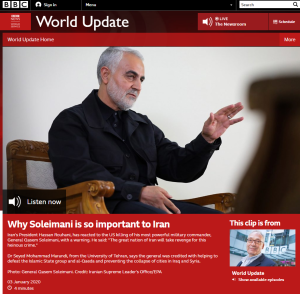 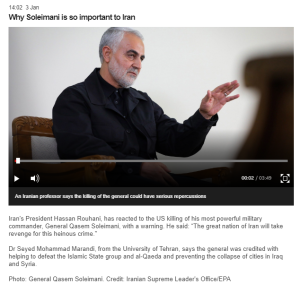 Four days later Marandi was back on the BBC airwaves. The January 7th edition of the BBC Radio 5 live programme ‘Up All Night’ – hosted by Rhod Sharp – gave him over fifteen minutes of airtime (from 3:06:25 here) after having introduced him using only his academic titles. 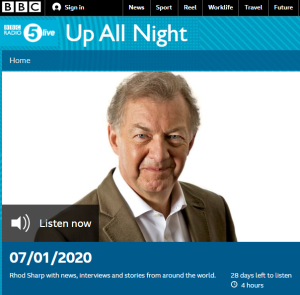 Marandi began by describing Soleimani as a “war hero” who, during the Iran-Iraq war, had survived chemical weapons attacks. He went on to promote a lie he has been peddling for over a decade, claiming that those chemical weapons “were provided to Saddam Hussein by European countries and the United States”.

Sharp failed to provide any challenge to that falsehood or to the subsequent claim that Soleimani “helped the Palestinians and their cause…ah…they’re…they live under apartheid and colonisation.”

He was similarly silent when Marandi claimed that it was a US objective to “create a Salafist state between Syria and Iraq”.

Marandi’s falsehoods and conspiracy theories continued unquestioned until Sharp closed the item by reminding listeners of his academic titles but with no mention of his regime connections.

Obviously the amplification of Iranian regime approved propaganda does not meet the BBC’s public purpose remit of providing “duly accurate and impartial news, current affairs and factual programming to build people’s understanding of all parts of the United Kingdom and of the wider world” – especially when that propaganda goes unquestioned and unchallenged by underinformed BBC presenters clearly trying to fill airtime. Moreover, the damage done to audience understanding of the story is exacerbated when audiences are not informed (as required by BBC editorial guidelines) of the relevant context of the contributor’s “particular viewpoint” and affiliations  and he is presented as a supposedly neutral and reliable ‘academic’.