Here’s the headline, and accompanying photo, of an op-ed by Nour Soubani and Eric Lewis in the Independent on April 1. 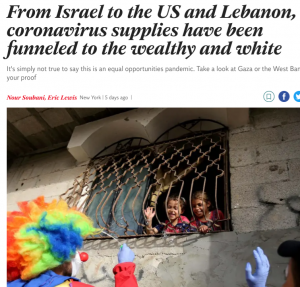 Now, here are the relevant passages that help set up the central argument:

A viral nemesis traverses the globe, oblivious of race, color, or political division.  At the same time, the well-off, mainly of white European origin, shelter in place and largely avoid exposure.

While Covid-19 ignores superficial human differences, governments have created a social hierarchy that makes those differences a primary determinant in who gets sick and who dies.

Whilst much of the op-ed deals with coronavirus-related inequalities in other countries, there are several paragraphs devoted to Israel:

In the West Bank and Gaza, Israel has a duty under the Geneva Conventions to ensure that Palestinians receive essential information and health services. Until recently, information on the spread of Covid-19 has been published in Hebrew, with little to no Arabic materials. Longstanding restrictions on freedom of movement interrupt Palestinians’ ability to access healthcare facilities and services. This affects both patients who need treatment and cannot get to hospitals and clinics, as well as healthcare workers who can provide treatment but cannot get to work. In addition, detention of Palestinians in the West Bank without charge or trial adds to the overcrowding of facilities and increases the risk of exposure to Covid-19.

The situation in Gaza is more severe, given a near-complete absence of health infrastructure and delays in the import of medical equipment.  Hospitals in Gaza have an estimated 40 per cent of basic medication needed, and reports estimate between 50 and 100 ventilators and 40 functioning beds for adults. There are 700 Personal Protective Equipment kits in the whole of Gaza, and Israel has sent a few hundred Covid-19 testing kits for approximately 1.8 million people.

Whatever one’s views on the Israeli-Palestinian issue, Israel cannot ignore a healthcare crisis over the millions of Palestinian human beings under its political control and in need of pandemic response.

First, we’ll address some of the specific claims before pivoting to the issue of race.

The writers claim that “Until recently, information on the spread of Covid-19 has been published in Hebrew, with little to no Arabic materials”.  This is misleading. Though early in the pandemic there was less detailed and less frequently updated information on the Health Ministry’s Arabic page in comparison to the Hebrew page, this problem was addressed back in mid-March.

The assertion that “Israel has sent a few hundred Covid-19 testing kits for approximately 1.8 million people” is an issue we refuted in a previous post.  We noted that thousands of donated testing kits and protective gear have entered Gaza, and that there are no Israeli restrictions whatsoever on coronavirus related medical supplies.  Mainstream media outlets have actually hailed the impressive cooperation between Israel and the Palestinians in tackling the pandemic, and the anti-Israel NGO Gisha even acknowledged that, since the pandemic, “Israel has met all of the Palestinian requests for medical assistance.”

Now to the central issue of race.

The suggestion, in the first paragraph preceding the section about Gaza we cited, that Palestinian “people of color dying from coronavirus in disproportionate numbers“, rests on two false premises.  The first is that Palestinians are dying from coronavirus in disproportionate number, which is completely false. Whilst 238 Israelis have died from the virus, only 2 have died in the Palestinian territories. (The PA health site lists 4 deaths, but this appears to include Palestinian residents of east Jerusalem in their count.)

So, given the population of Israel (over 9 million) and the Palestinian territories (5 million), Israeli deaths are far, far higher proportionately than in ‘Palestine’.

But, the most serious deceit of the op-ed is the implication that Israel represents “whites” who are discriminating in their allocation of coronavirus resources to “people of colour” – the Palestinians. The writers don’t say that explicitly, but that’s clearly the desired take away from the headline and supporting text.  Framing the conflict as one between powerful, rich Israeli whites (or even white supremacists) and poor, marginalized Palestinian people of colour represents one of the more dishonest narratives within the pro-Palestinian rhetorical repertoire – a false binary used to lure anti-racism activists in the West to the anti-Israel cause.

However, there’s one simple fact which, by itself, is sufficient to refute the charge: Most Israeli citizens are in fact people of colour – in that they are either Mizrahi, Ethiopian or Arab.  And, even if we were to exclude Arab citizens, a strong plurality of Jewish citizens are Mizrahi (page 8, table 1), not Ashkenazi.

Israel is NOT a ‘white’ nation.

Additionally, many Palestinians are are whiter than the average Israeli.

Moreover, as Yossi Klein-Halevi has argued, efforts by social justice warriors – like the Indy authors of this piece – to cast Israel as a racist white nation itself draws upon antisemitic history.

Anti-Semites, he explained, have typically “turned Jews into the symbol of whatever it is a given civilization finds as its most loathsome quality”.  Under early Christianity, Klein-Halevi note, the Jew was the Christ killer.  Under communism, the Jew was the capitalist. Under Nazism, the Jew was the ultimate race polluter. Now, he continued, we live in a civilization where “the most loathsome qualities are racism, colonialism and apartheid”.  And, lo and behold, he concluded, “the greatest offender in the world today” of these sins, Palestinians and their advocates argue, just so happens to be the Jewish state.

Framing Israelis as “white people” oppressing “dark” Palestinians represents, in Halevi’s view, a “classical continuity of thousands of years of symbolising the Jew”.