The one good result from Maxine Peake’s interview at the Independent is that the ensuing row discredited the conspiracy theory she and others believed that the police in Minneapolis who killed George Floyd learned their ‘technique’ of kneeling on someone’s neck from Israel.

Rebecca Long-Baily was sacked by Keir Starmer after refusing to delete her tweet of the interview, the British actress herself apologised, and the Indy corrected the article to make it clear that there was no connection between Israel and police brutality in Minneapolis.  Additionally, Channel 4 News – not an outlet traditionally friendly to Israel – published a thorough fact-check, completely debunking the conspiracy.

However, the Guardian, who fairly reported on the row over Peake at the time, published a photo yesterday of an Israeli police encounter with an anti-Netanyahu protester, with an edited caption likely intended to evoke Floyd’s killing.

Here’s the picture in question, from a July 22nd piece called “Israelis protest against Netanyahu in Jerusalem – in pictures“: 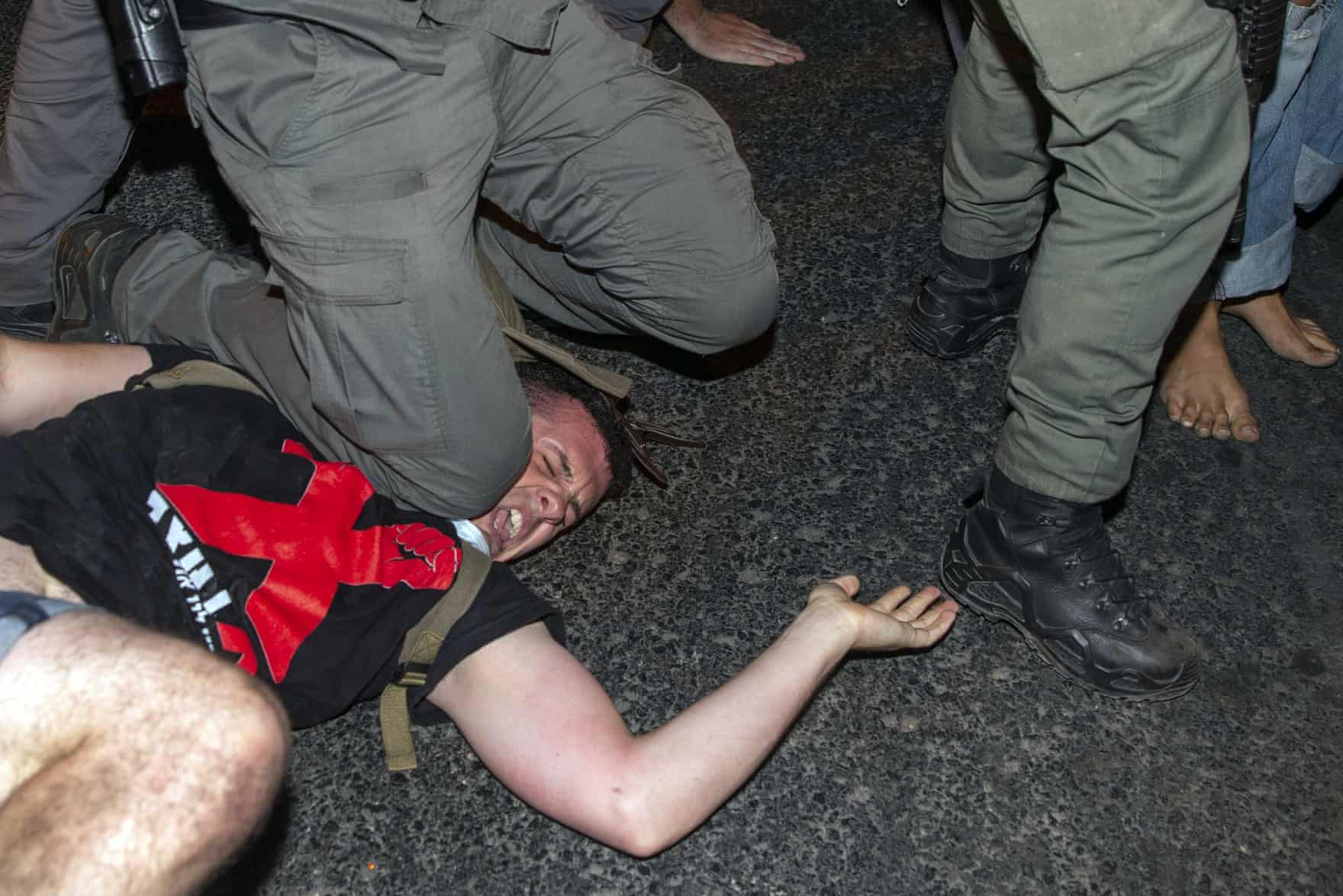 A police officer kneels on a demonstrator’s neck

Tellingly, the caption was edited from the original at AP, which reads:

An Israeli police officer puts his knee on a demonstrator to make an arrest during a protest against Israeli prime minister Netanyahu outside his resident in Jerusalem.

In other words, the full AP caption suggests to most readers that the knee represented a momentary snapshot within the context of the police arrest, and that there was no indication that the protester was even momentarily suffocated.

Our research could find no media outlet other than the Guardian that took the original AP caption and made such edits.

We decided to research the matter further, and contacted the Israeli Police to ask for a comment on the Guardian photo.  Sure enough, their international media spokesperson confirmed to us that the protester was only keeled on for literally a second or two whilst being arrested and placed in handcuffs, and that he didn’t suffer any injuries from the arrest.

The police officer in Minneapolis, let’s remember, keeled on George Floyd’s neck for 7 minutes, 46 seconds before he died.

It is a shame that the photo taken presents only a partial picture of a few seconds of the severe violence that preceded the photo that was directed directly at police officers at the scene.  During the protest that escalated into a violent incident and disturbances, a police officer was bitten by a female demonstrator who was being evacuated from the road at the time of the protest.

We view violence directed at police officers as a serious incident and will not allow violent protesters to attack officers or border policeman.

The spokesperson sent us this photo of the bite mark the policeman suffered which required him to get treatment at a local hospital: 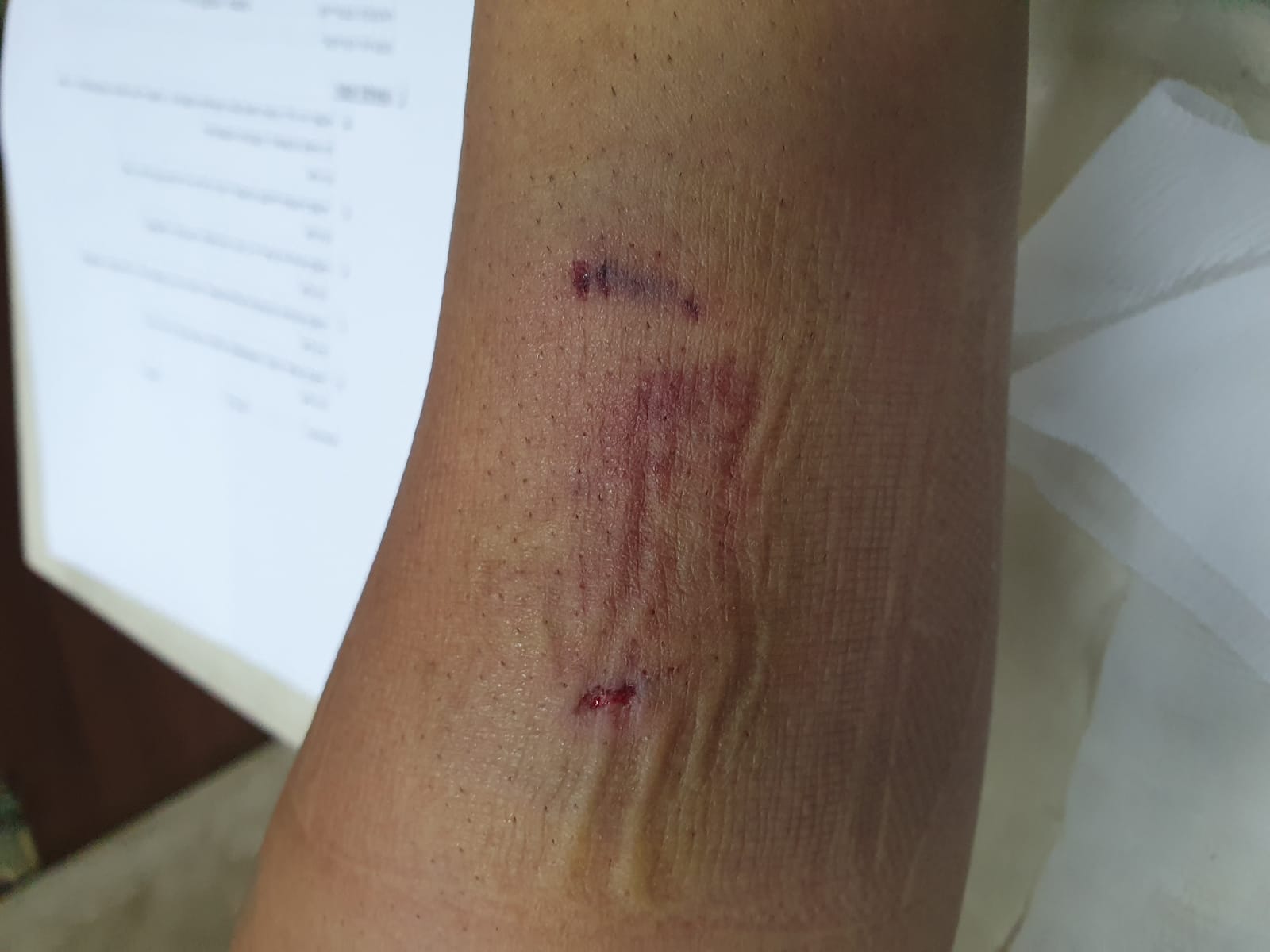 We’ve contacted the Guardian to request that the caption be edited to make the context of the photo clearer.

Like Loading...
Tags from the story
Delegitimization, George Floyd, Guardian, Israel
Written By
Adam Levick
More from Adam Levick
Ali Abunimah – contributor to ‘Comment is Free’ from 2006 to 2009,  co-founder of...
Read More