At around 10 p.m. UTC on the evening of July 23rd the BBC News website published a report headlined “Israeli fighter jets challenge Iran passenger plane – Iran media” which was also promoted on Twitter. 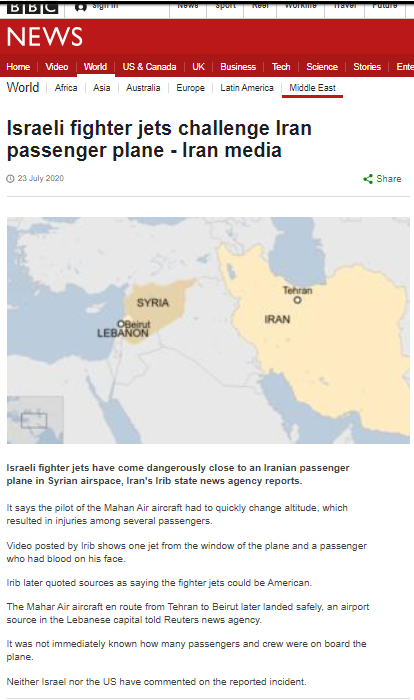 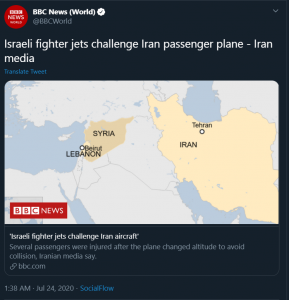 As noted in the opening lines of that report, the sole source of the BBC’s report was the Iranian state-controlled media agency IRIB.

In paragraph four readers discovered that the BBC had decided to run that headline despite knowing that:

“Irib later quoted sources as saying the fighter jets could be American.”

Two subsequent versions of the article used the same headline. In the early hours of July 24th, nearly six hours after the report’s initial publication, the headline to its fourth version was amended to read “US fighter jet challenges Iran passenger plane – Iran media”.

Readers had to proceed to paragraph eleven (out of 14) before they were told that:

“In its earlier reports, Irib news agency said that two fighter jets could have been Israeli.” [emphasis added]

The latest version of that BBC report states:

“In its earlier reports, Irib news agency said that two fighter jets could have been Israeli. Israel “had nothing to do with the incident”, security sources told Israeli public broadcaster Kan.”

As reported by Seth Frantzman at the Jerusalem Post:

“The pilot of the Mahan Air flight appears to have known the jets were American. By around 11 in the evening Israeli media were quick to clarify that these were not Israeli aircraft.” 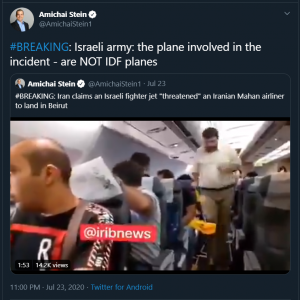 Another Israeli media outlet, Maariv, reported at 23:07 Israeli time on July 23rd that Iran has changed its version of the story and was now saying that the jets were American rather than Israeli. 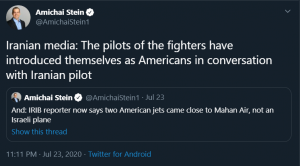 In other words, shortly after 11 p.m. Israeli time (20:00 UTC) on July 23rd it was clear that Israel had nothing to do with this story. Nevertheless, two hours later the BBC News website chose to publish a report based entirely on earlier uncorroborated claims made by the Iranian state-controlled media outlet (which had its foreign language arm PressTV banned from broadcasting in the UK in 2012) and left that misinformation online for nearly six hours. The BBC’s Tweet claiming Israeli involvement in the story is still standing, with no correction appended.

And yet, the BBC claims to produce news that “can be trusted”.