On Thursday, we posted about a Guardian photo depicting an Israeli police encounter with an anti-Netanyahu protester in Jerusalem that, along with the (edited) caption, served to evoke George Floyd’s killing. Here’s the Associated Press (AP) photo in question, from a July 22nd piece called “Israelis protest against Netanyahu in Jerusalem – in pictures“: 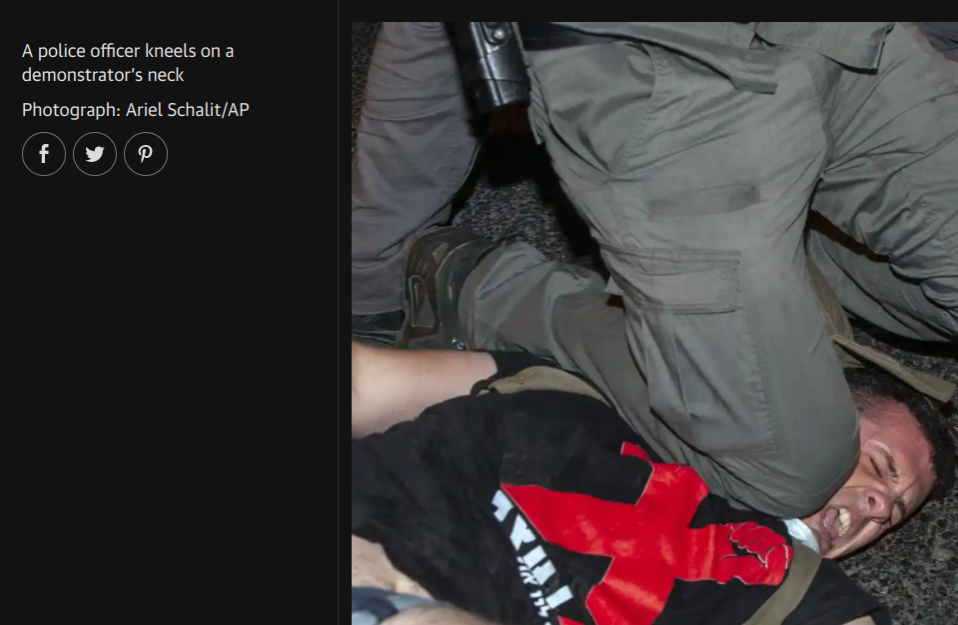 As we noted in our post, the photo and caption are extremely misleading for several reasons.

First, it clearly evokes the murder of George Floyd and, certainly on some level, serves to reinforce the discredited conspiracy theory alleging Israeli police taught Minneapolis police the ‘technique’ of kneeling on a suspect’s neck.

Moreover, the caption deviates from the original caption of the AP photo, which reads:

An Israeli police officer puts his knee on a demonstrator to make an arrest during a protest against Israeli prime minister Netanyahu outside his resident in Jerusalem.

The difference is significant, in that, unlike the Guardians revised version, AP doesn’t claim that the officer was kneeling on the protester’s neck, only that he put his knee on the demonstrator. (It seems clear, based on this slowed down video, that the officer’s knee was never on the suspect’s neck).  Further, unlike the Guardian version which provides no context, the AP caption is clear that the context of the brief kneeling is the police officer’s arrest of the protester.

This is important, because, as we confirmed with the international press spokesperson for the Israeli Police, the kneeling lasted a second or two before the suspect, who had assaulted the officer moments before the photo was taken, was placed in handcuffs.  Of note also, the suspect didn’t suffer any injuries from the arrest.

Let’s remember that the police officer in Minneapolis keeled on George Floyd’s neck for 7 minutes, 46 seconds before he died.  In other words, despite the evocative photo, there are literally zero similarities between what occurred in Minnesota in May, and the arrest of the protester in Jerusalem last week.

So, we asked Guardian editors to revise the caption, and they agreed:

As you can see, the new caption more closely mirrors the original AP caption, in not falsely claiming that the knee was on the demonstrator’s neck, and in noting the context of the arrest.

It’s  not a dramatic change.  But, nonetheless, given the way in which anti-Israel activists cynically used the killing of Floyd to vilify Israel, it’s important that any likeness readers may intuit between the arrested Israeli protester and Floyd be dispelled.