Recent BBC reporting on the topic of vaccinations against the Covid-19 virus in Israel has for the most part displayed a pattern of erasing from audience view relevant agreements signed by the PLO on behalf of the Palestinians over a quarter of a century ago.

On repeated occasions BBC audiences were not informed of the fact that under the terms of the Oslo Accords, the Palestinian Authority took on responsibility for the healthcare of Palestinians living in the West Bank and Gaza Strip and that it is hence the PA health ministry which is responsible for vaccinating Palestinians.

Another example of the BBC’s practice of selectively ignoring agreements included in the Oslo Accords came in the January 9th afternoon edition of the BBC World Service radio programme ‘Newshour’.

In an item (from 14:06 here) promoting a film about the mayor of Ramallah, Charlotte Gallagher told listeners:

“Twenty kilometers from Jerusalem, Ramallah is in some ways a city like any other with restaurants, shopping centres and car dealerships. But it’s part of the occupied territories and lacks full autonomy. Building a much-needed sewage treatment works in Ramallah needs to be agreed with Israel.” [emphasis added]

Pursuant to the Oslo Accords, Ramallah is of course situated in Area A and has been under the full control of the Palestinian Authority since September 1995. Gallagher however sidelined those facts in order to promote the notion that the city “lacks full autonomy” and went on to provide what she appears to believe to be an illustrative example.

In order to do that, she had to ignore Article 40 of the 1995 Oslo II agreement which is titled ‘Water and Sewage’ which includes the following: 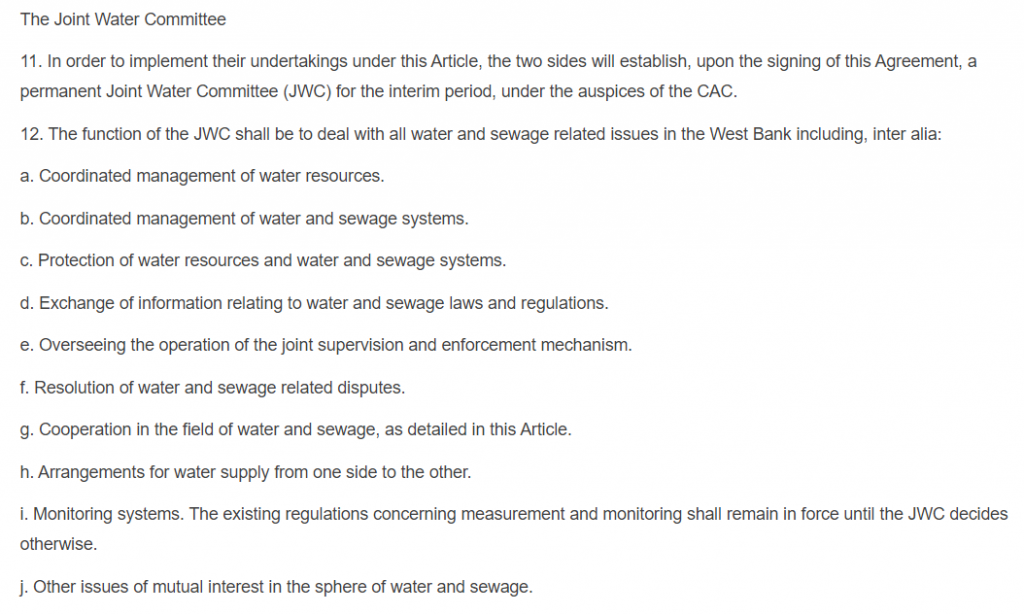 In other words, the Palestinians signed an agreement a quarter of a century ago according to which “Plans for construction of new water and sewage systems or modification of existing systems require the prior approval of the JWC [Joint Water Committee]”.

Charlotte Gallagher sought to support her claim that Ramallah “lacks full autonomy” by citing a situation dictated by the terms of an agreement willingly signed by the Palestinians 25 years ago. Just as some of her colleagues recently ignored another clause in that agreement concerning the PA’s responsibility for the healthcare of Palestinians, she too omitted any mention of the Oslo Accords in order to promote her chosen political narrative.

The BBC is of course by no means alone in ignoring the existence of the Oslo Accords (or distorting their content) when it suits the narrative being promoted regarding a particular story. That practice however sells its audiences short by failing to provide the full range of relevant information and reducing the Palestinians to a status devoid of all agency and responsibility.

One reply on “The BBC’s Oslo Accords disappearing act”