Long-time readers may recall that back in February 2017 we noted the BBC’s failure to report the election of the head of the Gaza Strip UNRWA teachers’ union to the Hamas political bureau and his eventual suspension:

Four years on, elections for Hamas’ Gaza Strip political bureau were last week held again and Suhail al-Hindi would appear to have retained his position on that body, along with Fathi Hammad and occasional BBC interviewees Mahmoud Zahar and Salah Bardawil.

The political bureau’s leader since 2017, Yahya Sinwar, also retained his position but only after a very close run against Nizar Awadallah. 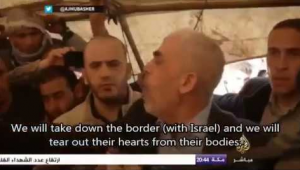 ‘“Yahya Sinwar has been elected for a second term as head of Hamas’ Gaza political bureau, from 2021 to 2025,” Hamas spokesperson Hazim Qasim said in a statement. […]

Three rounds of voting were conducted last night, with neither Sinwar nor his chief opponent Nizar Awadullah able to clinch victory. Sinwar received more than 50% of the vote in Wednesday’s ballot, leading him to a second four-year term. […]

While Sinwar emerged victorious, he faced considerable and surprising opposition to a second term. Sinwar’s reign in Gaza has not seen a major war between Hamas and Israel, but living conditions in the crowded, poor Gaza Strip have continued to deteriorate.’

At the Jerusalem Post, Khaled Abu Toameh reported that:

‘“The tight battle between Sinwar and Awadallah could trigger a crisis among the Hamas leadership,” a Palestinian political analyst in the Gaza Strip told The Jerusalem Post.

According to the analyst, the tight race is also a sign of Sinwar’s declining popularity among Hamas cadres in the Gaza Strip. […]

Sinwar, 58, was said to be the mastermind behind the Hamas-sponsored 2018-2019 mass protests staged near the border with Israel. The protests ended without achieving their main objective: lifting Israel’s blockade of the Gaza Strip.’

Analyst Avi Issacharoff also noted that the fact that the election was so close “is linked to Sinwar’s lack of success in producing significant economic and diplomatic gains” such as the release of prisoners or the lifting of the counter-terrorism measures imposed on the Gaza Strip by means of the ‘Great Return March’ that Hamas approved and organised.

Despite having reported Sinwar’s election in 2017 the BBC has to date completely ignored last week’s poll, once again demonstrating its failure to adequately inform its audiences about internal Palestinian affairs.

WHAT CAN BBC AUDIENCES EXPECT IF THE ‘GREAT RETURN MARCH’ RETURNS?