On December 27th an article by Nadine Batchelor-Hunt titled ‘I’m Jewish and black – where do I fit in?’ was published on the BBC News website’s ‘UK’ and ‘Middle East’ pages.

“After years of having her Jewishness questioned because of her blackness, Nadine Batchelor-Hunt travelled to Israel to meet the Ethiopian Jewish minority, for whom being both black and Jewish is the norm.” 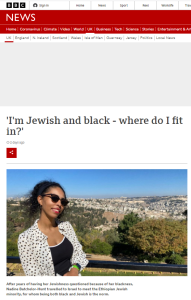 While on the whole innocuous, that article does promote an inaccurate claim that has been previously seen in BBC content.

“Although Ethiopian Jews have excelled in all walks of life, they have also suffered as a minority. […]

They have also faced prejudice from landlords, and in the 1990s the government was even secretly throwing away blood donated by Ethiopian Israelis.” [emphasis added]

The link in that highlighted section leads to a 1996 report by Patrick Cockburn at the Independent which opens:

“Thousands of angry Ethiopian Jews fought their way through police lines and besieged the Prime Minister’s office in Jerusalem yesterday, during a protest sparked off by the revelation that the Israeli national blood bank routinely destroyed blood donated by Ethiopians, on the grounds that they might have Aids.”

As we have had cause to note here on previous occasions, that presentation is inaccurate.

The 1996 commission headed by former Israeli president Yitzhak Navon which investigated that allegation concluded that the disposal of blood donations from members of the Ethiopian community was the result of a failure by the blood services – which are run by Magen David Adom rather than “the government” – to update an earlier directive from 1984 (at the time of Operation Moses) which related not to HIV, but to Hepatitis B, Tuberculosis and Malaria. The Navon report stated:

“Contrary to the public impression, there is no connection between the decision made in 1984 and AIDS.”

“At the time the health services were worried by findings connected to the prevalence of diseases such as Malaria, Tuberculosis and Hepatitis among the Ethiopian immigrants from ‘Operation Moses’.”

As previously noted here, the risk of the transmission of HIV through donated blood was first recognised in 1983 and standardised testing of blood donations for HIV and the then newly identified Hepatitis C virus began around 1992. Whilst the disposal of blood donations from members of the Ethiopian community that was reported in 1996 was undoubtedly insensitive, it was not founded in racism but based on the very real problem which existed worldwide at the time concerning the possibility of the transmission of infectious diseases via blood transfusions.

To this day – regardless of skin colour – one cannot donate blood in Israel if one has visited or lived in a country in which Malaria is endemic, such as Ethiopia, until a specified amount of time has passed.

Nevertheless, inadequate fact-checking on the part of the BBC means that over twenty-five years after the publication of the Navon commission’s findings, the corporation is once again found promoting an inaccurate story based on a groundless report in a newspaper.