In early January we noted the appearance of a BBC News website report titled ‘Covid: Israel Omicron spike could bring herd immunity but with risks – health boss’ in which two issues arose that had already been corrected in previous BBC content. 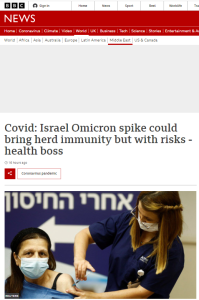 CAMERA UK submitted a complaint to the BBC the day after that report’s appearance in which we pointed out that the use of the term “UN experts” is inaccurate and misleading because the people concerned are actually special rapporteurs who are not UN employees. We also pointed out that the sentence “The Israelis said the Palestinians were responsible for managing health matters in the Palestinian Territories” failed to inform readers of the relevant section of the Oslo Accords and hence of the fact that it is not just Israel that “said” that the PA is responsible for healthcare in the territories under its control.

On January 11th we were informed by BBC Complaints that it would take more time to address our complaint and on February 1st the BBC wrote to inform us that the time frame had expired.

On February 25th we received the following:

“Thank you for getting in touch again about our article Covid: Israel Omicron spike could bring herd immunity but with risks – health boss and please accept our apologies for the very long and regrettable delay in our response.

After considering your points we have amended the article’s final two sentences to now say:

UN independent experts had been critical of Israel for not fully extending its vaccination programme to Palestinians under its control, arguing that it was obligated to do so as the occupying power.

However, Israel has argued that under the terms of peace accords with the Palestinians, the Palestinian Authority is responsible for managing health matters in the territories.

We consider these changes a minor clarification, rather than a correction, and so have not added a note to the article.”