That report relates to findings published on the same day by Facebook’s Oversight Board concerning a post removed by the company in May. Linking to a summary of the case rather than the full decision, the BBC’s report opens as follows:

“Facebook’s Oversight board has recommended an independent review into alleged bias in moderating posts related to Israel and Palestinians.

It comes after the board said the tech giant failed to answer all its questions around alleged censorship of Palestinian activists.” [emphasis added]

“Public comments submitted about the case included allegations that Facebook disproportionately removed or demoted content from Palestinian users and content in Arabic during the conflict. There were also criticisms that it was not doing enough to remove content that incited violence against Israeli civilians.

A Palestinian digital rights group found at the time of the conflict that nearly 500 posts related to the Gaza conflict were removed between 6 and 19 May.”

The BBC did not identify the individuals or organisations making such “allegations” and so readers would be unaware that among the “public comments” received by Facebook’s Oversight Board in relation to that case were submissions from partisan organisations such as ‘Jewish Voice for Peace’, ‘Foundation for Middle East Peace’ and a group called ‘AROC’ which, inter alia, campaigns against Israeli commercial shipping as part of its support for the BDS campaign.

Neither did the BBC bother to identify the “Palestinian digital rights group” whose findings it chose to amplify.

Fast forward to October 8th and the publication of a related report by the political NGO ‘Human Rights Watch’.

That report extensively quotes two NGOs – ‘Sada Social’ (based in the Palestinian Authority controlled territories) and ‘7amleh’ (based in Haifa) and promotes multiple links to their content. In one section, readers find the following:

“In May, the escalating tensions between Israel and Palestinians culminated in 11 days of fighting between Israeli forces and Palestinian armed groups based in the Gaza Strip. From May 6 to 19, 7amleh, the Arab Center for the Advancement of Social Media (pronounced, “hamla” in Arabic, meaning “campaign”), reported documenting “a dramatic increase of censorship of Palestinian political speech online.”

In other words, the anonymous “Palestinian digital rights group” cited in the BBC’s report is apparently ‘7amleh’, which also made a submission to the Facebook Oversight Board, although the number 500 is not mentioned there.

At the bottom of HRW’s long report comes an interesting disclosure:

That HRW employee is Maina Kiai.

“Kiai is a Kenyan lawyer and human rights activist who is director of Human Rights Watch’s Global Alliances and Partnerships Program and who served as the United Nations special rapporteur on the Rights to Freedom of Peaceful Assembly and of Association from 2011 to 2017.”

Regardless of one’s opinion on the subject of a HRW staffer sitting on Facebook’s Oversight Board despite the fact that HRW campaigns on these issues, it is clear that HRW’s report relies heavily on information sources from the two NGOs ‘Sada Social’ and ‘7amleh’, that Facebook’s Oversight Board accepted a submission from the latter and that according to that organisation, it has previously “shared” with Facebook “hundreds of cases of content takedowns that did not violate Facebook’s community standards”.

It is therefore important to understand the agendas of these two NGOs which are clearly influencing outcomes and conversations on the issue of social media moderation. 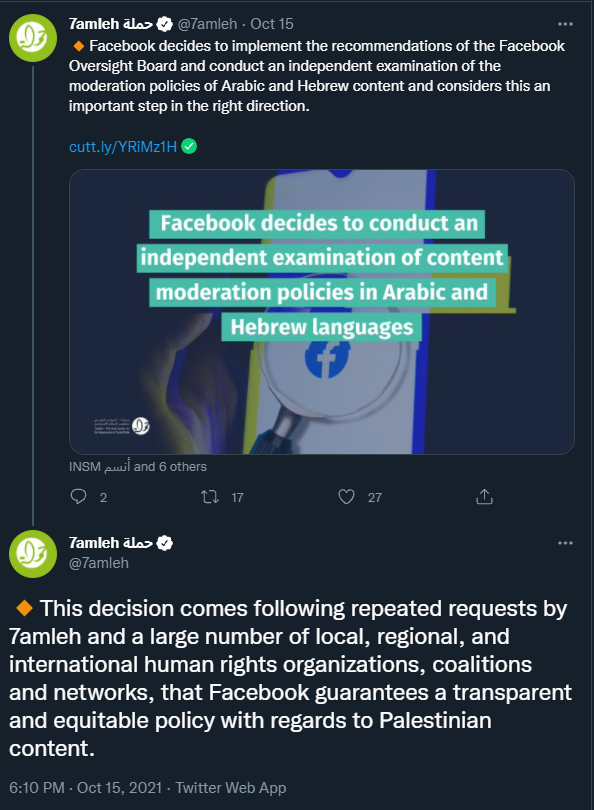 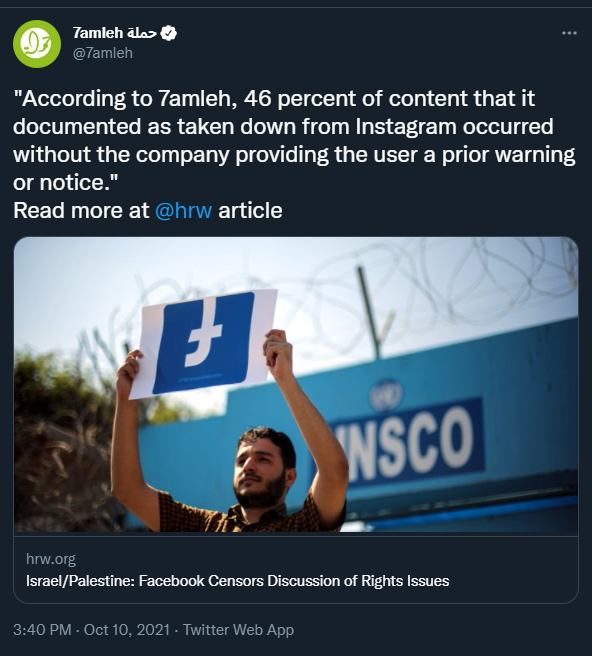 In February of this year CAMERA UK published a post by CAMERA Arabic about an ‘Independent Arabia’ article which featured representatives from both those NGOs: Iyad Rifai, who heads ‘Sada Social’ and Nadim Nashif of the 100% foreign funded Israeli NGO ‘7amleh’.

“The second interviewee, Nadim Nashif, currently heads the Israeli NGO “7amleh – the Arab Center of the Advancement of Social Media”, headquartered in Haifa (notably, rather than acknowledging the northern city is located in Israel, it is mostly referred across 7amleh’s website as a part of “the Occupied Palestinian Lands of 1948”, “the 48’ Territories” or “the 48’ Lands”).

On his own professional Twitter page, Nashif, an Israeli citizen, claims he operates out of “Palestine”; so does another 7amleh employee, Balad’s former MK Niveen Abu Rahmoun, who is purportedly situated in “the Galilee – Palestine”).” […]

“… “7amleh” and “Sada Social” are devoted whitewashers of hateful and violent content, originally posted on social media by accounts they falsely portray as “persecuted”.  Sada Social even labeled several murderers of civilians as “martyrs” itself, including notorious Yahya Ayyash, who is responsible for the deaths of many dozens of Israeli civilians between 1993-1996.”

‘7amleh’ puts out a “digital rights weekly update”, an edition of which from September promotes several links including one to the above mentioned BBC Tech report and another to an article by a political activist identified with the anti-Zionist ‘Balad’ party that was published by ‘Middle East Eye’:

‘Sada Social’ similarly objected to classification of a person who carried out shooting attacks on civilians using public transport as a terrorist. 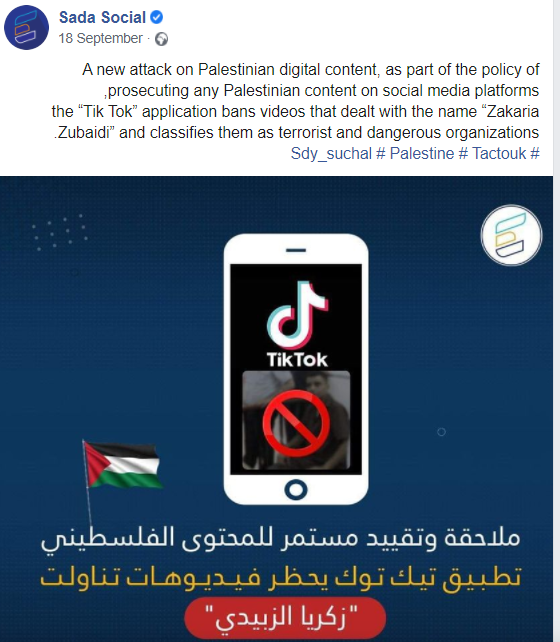 Both ‘7amleh’ and ‘Sada Social’ have repeatedly defended ‘Quds al-Akhbariya’ (QNN) – a Hamas-affiliated news network which regularly praises murders of Israeli civilians – on occasions when Twitter and Facebook sanctioned its social media accounts – for example here, here, here and here.

There are many more examples illustrating why ‘Sada Social’ and ‘7amleh’ are not impartial authorities on what is or is not legitimate online content. However as we see, both ‘Human Rights Watch’ and Facebook (along with the BBC and other Western mainstream media outlets) have totally ignored the political affiliations, ideologies and agendas behind their promotion of “Palestinian digital rights” and their attempts to influence social media companies’ policies.

Such politically motivated influence should obviously be of serious concern to anyone who is aware of the role all too often played by social media platforms in spreading incitement to hatred and violence – and not only against Israelis.