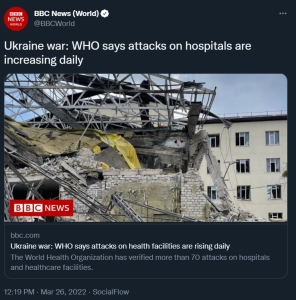 “There have been more than 70 separate attacks on hospitals, ambulances and doctors in Ukraine with the number increasing on a “daily basis”, says the World Health Organization (WHO).”

Readers are informed that:

“Because the war in Ukraine is an international armed conflict between two states, the Geneva Conventions apply. […]

Under Article 18 of the Conventions, civilian hospitals “may in no circumstances be the object of attack, but shall at all times be respected and protected”.

A breach of that rule can be investigated by the International Criminal Court in the Hague and, if found to be a war crime, individual perpetrators can be prosecuted and punished.

There are though exemptions to the Conventions.

The protection from attack is lost if the medical facility is placed near a legitimate military target or is thought to be committing an act “harmful to the enemy”.

According to the International Committee of the Red Cross (ICRC), that could include the use of a hospital as a shield for healthy fighters or the staging of a medical unit in a position which impedes an enemy attack. […]

The ICRC says that, in theory, before targeting a hospital which might be in breach of those rules, the attacking side should always give a warning, with a time limit, and the other side must have ignored that warning.

There is no evidence this has happened in the Ukraine conflict.”

Back in 2016 the BBC News website similarly provided a short insert titled “What does the law say about bombing hospitals?” in a report about air strikes on hospitals in Syria blamed on Russia.

“So as we see, the BBC is aware of the fact that medical facilities can be a legitimate military target in certain situations but notably, it did not go to the trouble of informing its audiences of that fact two years ago during the conflict between Israel and Hamas. Moreover, the corporation went out of its way at the time to conceal Hamas’ use of hospitals in the Gaza Strip for military purposes and to provide amplification for denial of that tactic, thereby implying that Israeli actions were unnecessary, unjustified and even unlawful.”

We of course look forward to reading a presentation as informative as the one provided by Jim Reed in relation to events in Ukraine the next time that Israel finds itself having to deal with Hamas’ exploitation of medical facilities for military purposes.

COMPARING BBC REPORTING ON STRIKES ON HOSPITALS IN SYRIA AND GAZA

BBC reports on Wafa hospital shown to be inaccurate