A report that later appeared on the BBC News website’s ‘Middle East’ page under the headline “Two Palestinians killed in gunfight during Israeli West Bank raid” was originally published on March 31st without any reference to a “gunfight” in its title. 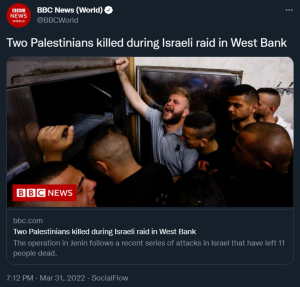 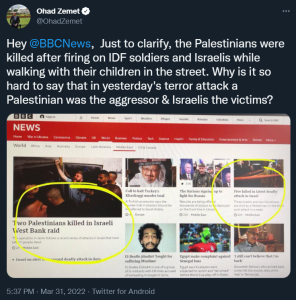 Some eight hours after initial publication, it was apparently decided that the fact that the “two Palestinians” were among the armed men who attacked Israeli soldiers carrying out terrorism related arrests should have been reflected in the headline, which was then amended.

Readers of the BBC’s report are told that:

“Two Palestinians have been killed in a gunfight that erupted during an Israeli raid in Jenin, in the occupied West Bank, Palestinian health officials say.

Israel’s military said soldiers entered the refugee camp to arrest three people suspected of involvement in a deadly attack in an Israeli city on Tuesday.

They came under fire from Palestinian gunmen and responded, it added. […]

The Israel Defense Forces (IDF) said soldiers and Border Police officers entered Jenin early on Thursday to apprehend individuals suspected of helping a Palestinian man from the nearby village of Yabad who shot dead five people on Tuesday in the Tel Aviv suburb of Bnei Brak.

The IDF said “a number of violent incidents” occurred during the raid. “Palestinian assailants fired toward the troops, who returned fire. Three assailants were hit,” it added.

The Palestinian health ministry said two young Palestinians – Sanad Abu Atiyeh, 17, and Yazid Saadi, 23 – were killed. Another 15 people were injured, three of them critically, it added.”

The BBC’s reporting does not include any mention of the Palestinian Islamic Jihad terrorist organisation despite its considerable presence in the Jenin refugee camp and the appearance of that organisation’s flag in photographs of the deceased. 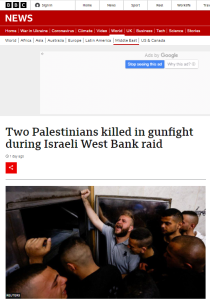 The BBC’s report mentions a stabbing attack that took place on March 31st on a bus in Gush Etzion which was not given any stand-alone coverage on the BBC News website. Unsurprisingly, the words terror or terrorist do not appear in the BBC’s account of the incident.

In an insert of analysis from the BBC Jerusalem bureau’s Yolande Knell, readers are also told that:

“Recent weeks have seen high-level talks between Israeli and Palestinian officials about how to bring calm during this sensitive period, when religious holidays will overlap for Muslims, Jews and Christians.

None of them want a repetition of the full-scale conflict between Israel and militants in Gaza during the Islamic holy month of Ramadan last year. However, co-operation has failed to prevent a rush of attacks and the latest clashes.”

That analysis does not however include any mention of Palestinian factions which do seek to escalate violence, as described in a statement put out by Hamas on the day this report was published which specifically mentioned Ramadan:

“The terror group said Thursday it welcomed “the blessed month of Ramadan, the month of struggle and martyrdom and victories” by “embracing the hands of our revolutionary heroes.””