Some three hours after the terror attack in Be’er Sheva on the afternoon of March 22nd, the BBC News website published a report headlined “Israel: Four killed in shopping centre attack” on its ‘Middle East’ page which was updated several hours later. 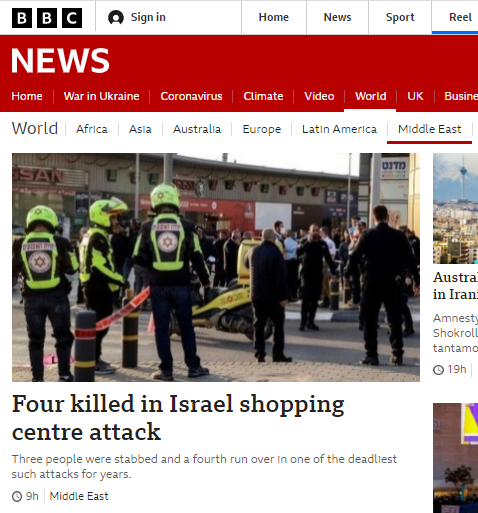 Neither in that headline nor in the report itself does the BBC clarify in its own words that what took place was a terror attack. In line with the selectively applied BBC editorial guidelines – “We should not use the term ‘terrorist’ without attribution” – the sole mentions of the word terrorist come in quotes from the Israeli prime minister:

“We will take strong action against terrorists,” he added. “We will also pursue and apprehend those who aided and abetted them.””

The BBC’s report was not amended to include the names and personal details of the victims of the attack.

“The four people killed by an Arab Israeli knifeman in a Beersheba terror attack on Tuesday were named as Doris Yahbas, 49, a mother of three, Laura Yitzhak, 43, also a mother of three, Rabbi Moshe Kravitzky, a father of four, and Menahem Yehezkel, 67, a brother to four.”

BBC audiences were not informed of condemnations of the attack from the terrorist’s hometown , his extended family and the Ra’am party, which has a significant electoral base among Bedouin in the Negev. Neither were readers told of statements praising the terror attack put out by Hamas, Fatah’s Al Aqsa Martyrs Brigades , the DFLP and a group associated with the Gaza Strip’s ‘Popular Resistance Committees’, among others.

“It is the deadliest such attack in Israel for several years and follows a spate of stabbings by Palestinians of Israelis in recent weeks. It is the third attack of its kind since Saturday.”

Listeners to BBC Radio 4’s ‘Six O’Clock News’ on March 22nd heard a report (from 24:38 here) which completely failed to clarify that its subject matter was a terror attack rather than a criminal incident.

Newsreader: “At least four people have been killed and several wounded in an attack in southern Israel. Police in the city of Be’er Sheva say a man first stabbed a woman at a petrol station, the drove off and rammed his car into several people including a cyclist. He then left his vehicle and stabbed a man and a woman outside a shopping mall. Mobile phone footage shows a man brandishing a large knife who’s then shot dead by a passer-by. The Israeli security services identified the man as an Arab-Israeli citizen from a nearby town who’d spent time in jail.”

A news bulletin aired on the BBC Radio 4 programme ‘The World Tonight’ later the same evening (from 06:38 here) qualified the description of the murders of four people by an ISIS supporter as a terrorist attack and threw in some Hamas propaganda for good measure. [emphasis added]

Newsreader: “Four people have been killed in what police are calling a terrorist attack in southern Israel. The country’s prime minister Naftali Bennett praised those who shot the alleged assailant. Hamas has blamed what happened on Israel’s treatment of Palestinians. From Jerusalem, Yolande Knell.”

Knell: “This is one of the deadliest attacks of its kind in several years according to Israeli medical services. Police say the man stabbed a woman at a petrol station in Be’er Sheva then drove off and rammed into a cyclist and others. After leaving his car at a shopping centre, he stabbed another man and a woman. Mobile phone footage shows a man brandishing a large knife before he’s shot dead by a passer-by. The Shin Bet security service has identified the suspect as an Arab-Israeli citizen from a nearby town, saying that he was a known supporter of the so-called Islamic State group who’d spent time in jail.”

Both those news bulletins will remain available online “for over a year”.

When a man who had been in prison murdered two people in London in 2019, the BBC had no qualms about describing that attack as terrorism on multiple platforms. Once again the BBC’s double standards on ‘language when reporting terrorism’ are on display.