The racially motivated murders of ten people in Buffalo, NY, earlier this month have prompted quite a few media outlets to try to explain to their audiences the conspiracy theory called ‘Great Replacement Theory’ which was referenced in the perpetrator’s ‘manifesto’.

Among those organisations is the BBC, which on May 20th aired an edition of its World Service radio programme ‘The Real Story’ titled “What is the ‘Great Replacement’ conspiracy theory?”: 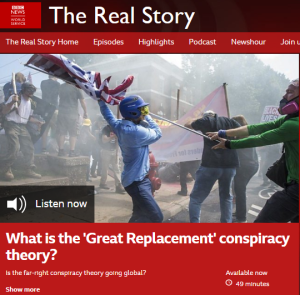 “The suspect in Saturday’s killing of ten people at a Buffalo supermarket allegedly wrote a document endorsing the Great Replacement Theory. It’s a racist far-right conspiracy theory that falsely states there’s a secret plan to replace white people through increased immigration and other means. In the United States some politicians and mainstream media figures like Tucker Carlson of Fox News are accused of pushing a version of the theory when they insist Democratic Party immigration policies have the same aim. In Europe too, fears that white, Christian culture is being undermined have been stoked by far-right politicians across the continent. So how has Great Replacement Theory evolved? Is the basic philosophy behind it going mainstream? And what can and should be done to address the fears of people concerned about demographic change?”

Both at the beginning of the programme and later at 07:23, listeners heard an explanation of that conspiracy theory from Professor Cas Mudde in which they were told that it:

“…argues that there is a specific elite that uses mass immigration to replace the original populations of particularly Europe – but it can be extended – by immigrants which will then become the new electorate of these parties. So generally, the elites are either the Left or social democratic parties or big business or the Jews. It’s not just your average racist theory of having waves of immigration or Islamisation of Europe or something. It is specifically this plan, this conniving plan of a small cabal that tries to achieve something political with it, so the idea is that they’re trying to sustain power.”

Shah: “Jacob, it’s been around for a long time but it’s interesting because depending on who you read or which version of it is bandied about – and there are a number of versions – sometimes it’s antisemitic, sometimes it’s anti-Islam, at least in the European versions. Is there any pattern to that or is it something that just changes depending on who the other happens to be at any given time?”

Davey replied: [emphasis in italics in the original]

Davey: “[…] But the antisemitic component does crop up time and time again. So similarly, if you look to Great Replacement Theory in the US, which focuses on African Americans or migrants from Latin America as well, and that idea that Jewish people are orchestrating it seems to be a cornerstone when you look at the elites who are running it. But again, not all the time. It changes, it adapts to fit the context in which it is being used by extremists.”

At 14:46 Shah referred to a 2017 ‘Unite the Right’ rally in Charlottesville and the chants of far-Right protesters:

However, BBC audiences around the world did not hear any further explanation of why Jews are a big component of that conspiracy theory and how its antisemitism is different to its other racist aspects. No representative from any of the major Jewish organisations which have been tracking the rise and effects of that conspiracy theory in recent years appeared on the programme. Likewise, no effort was made to explain how the Great Replacement Theory notions of Jews as “elites” trying to “sustain power” are linked to antisemitic tropes with which listeners may be more familiar, such as the ‘Jewish lobby’ trope that the BBC has itself promoted in the past.