Though Marvel responded to criticism by vowing to re-evaluate their portrayal of the Jewish Israeli character, that announcement came a couple of days after Indy contributor Ahmed Twaij’s op-ed on the subject. 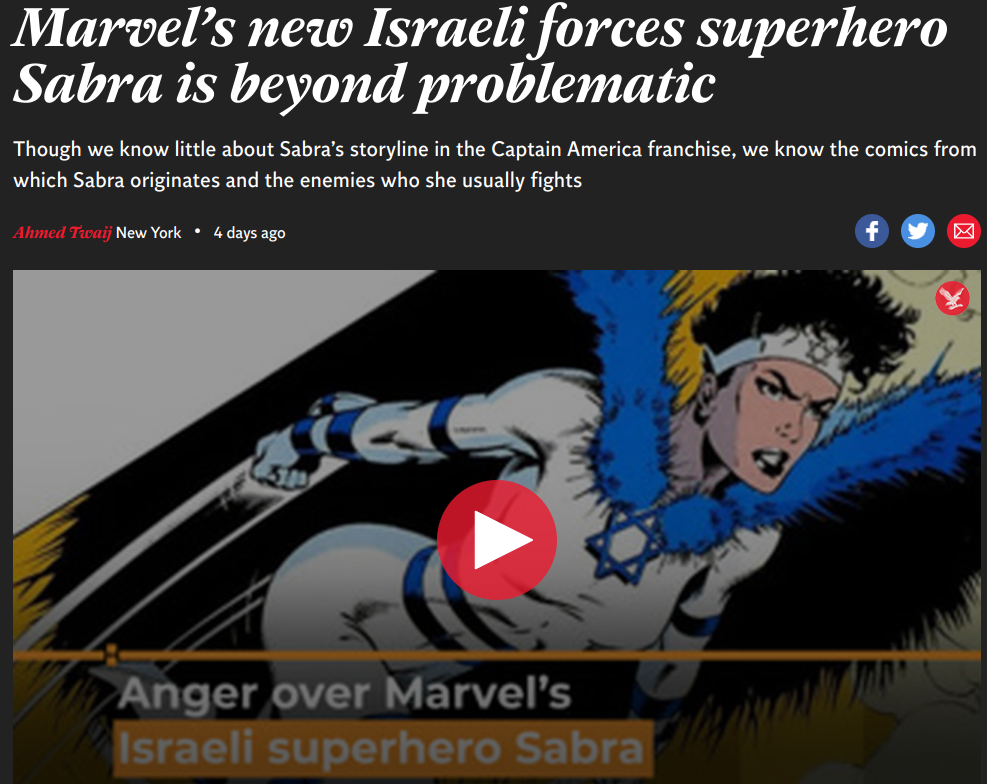 Indeed, for Palestinians, just the new superhero’s name of Sabra is controversial, reminiscent as it is of the Sabra and Shatila massacre (which witnesses its 40th anniversary this week.)

It’s not clear if the writer knows the origin of the word Sabra, but the Board of Deputies’ Daniel Sugarman responded to similar criticism.

Something I never thought I'd tweet, but Marvel calling an Israeli superhero "Sabra" is because Jews born in the region have been referred to as "Sabras" (a local fruit, prickly on the outside, soft on the inside) since the 30s. It's not referencing the Sabra & Shatila massacre. pic.twitter.com/gryr7UIj03

Twaij also complains that, though he doesn’t know how Sabra will be portrayed in the film, in its comic history, the character “fights enemies across Israel who – you can probably guess – are Arab terrorists”, imputing something racist about a Mossad agent busying herself trying to sabotage the plans of Palestinian extremists.

He then observes, in that context, that “In Jack Shaheen’s book Reel Bad Arabs, of the thousands of films [he] analysed between 1986 and 2000, only 12 Arab characters had positive roles compared to the colossal 935 negative portrayals”.  However, Twaij omits a follow-up study by the same author which found that, counter-intuitively, after the jihadist attacks on 9/11, there was a major increase in positive portrayals of Arab film characters.

But, the crux of the complaint by the Indy contributor is the fact that Marvel is portraying a woman in Israel’s security services in a positive light:

For millions of Palestinians, Israeli security forces and intelligence agencies are symbols of fear, oppression and violence… From forced evictions to implementing an apartheid system, the way in which Israel treats its Palestinian neighbours – and its citizens of Palestinian origin – continues to be deeply problematic.
…
If Marvel wanted to be truly politically balanced, they would tell the story of a Palestinian superhero protecting Arab children from Israeli rockets hitting a Palestinian school or hospital alongside the heroic narratives of Sabra.

In addition to hurling the baseless apartheid lie at Israel, whose Arab citizens enjoy the most democratic rights of any Middle East country, Twaij’s vision of a Palestinian superhero is deeply flawed.
For such a character to be truly righteous, and genuinely committed to helping Palestinians, the hero would need to defeat the violent extremists, like Hamas and Palestinian Islamic Jihad, whose malign obsession with Jews and the Jewish state fuels the conflict, diverts limited humanitarian resources to terror tunnels and rockets, and ensures continuing Palestinian misery.
Our Palestinian hero would also apprehend Palestinian political, religious and opinion leaders who peddle the toxic antisemitism and incitement that poisons the minds of their citizens; the hero would also help democratise and liberalise Palestinian society, and promote peace, tolerance and co-existence throughout the territories.
There are, of course, outside of the fantasy world of Marvel, no real superheroes – only ordinary Israelis and Palestinians who make choices each day which impact their lives and their collective future.  Whilst Israelis should be condemned and held responsible for decisions they make which are inimical to peace, the imputation of moral agency must apply to Palestinians as well.
Focusing on peace-making, and coming to terms with Israel’s right to exist as a Jewish state, is the only effective way to end the conflict and improve the lives of both Palestinians and Israelis.  But, to acknowledge such a truism would require that writers like Twaij cease infantilising Palestinians, and treat them instead as we should treat all adults – as moral actors whose bad decisions inevitably lead to bad outcomes.