Last month we noted the relative silence from the BBC on the topic of the long-running maritime borders dispute between Israel and Lebanon:

As observed at the time:

“BBC audiences have clearly not been provided with the full range of information essential for proper understanding of this story, not least on the highly relevant topic of Lebanon’s changing demands.” 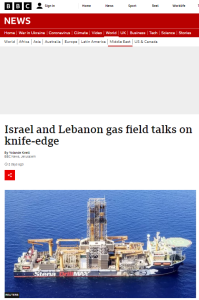 Knell’s description of the dispute is as follows:

“A triangle of turquoise Mediterranean waters is at the heart of the row over competing energy exploration rights. It contains part of the Karish gas field and part of Qana, a prospective gas field.

Israel maintains that Karish – licensed to London-listed company Energean – lies fully within its internationally recognised economic waters. Historically, Karish fell outside Lebanon’s claimed boundary, but in recent years it has argued that the gas field falls partly within its territory.”

Readers are provided with a lees than helpful map: 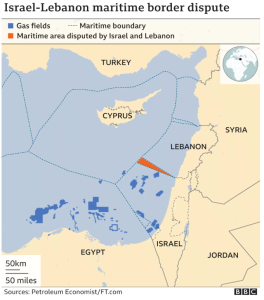 Clearly that presentation does not provide an adequate explanation of the dispute which began over a decade ago. Knell’s readers are not informed that in 2020 – following the discovery of gas in the Karish field – Lebanon presented new demands which went beyond those it originally made in 2010. As explained at the INSS:

Knell’s airbrushed description of previous rounds of negotiations also fails to give readers the whole picture, including Lebanon’s failure to respond to the proposal submitted by then US envoy Frederic Hof in 2012.

“Indirect negotiations between Israel and Lebanon first began a decade ago, with the discovery of valuable deposits of offshore natural gas.

But previous US-led efforts to solve their differences failed.”

Also notable is Knell’s framing of the meddling of the Hizballah terrorist organisation in the negotiations between two sovereign nations.

“But a misstep could result in war, with the Lebanese militant group and party Hezbollah making new threats to Israel.” […]

“In July, after an Energean production and storage vessel was sent to float above Karish, Hezbollah flew three unarmed reconnaissance drones towards it. They were shot down by the Israeli military.

Preliminary work for gas extraction is now due to start – an Israeli move that Hezbollah leader Hassan Nasrallah has called a “red line”.” […]

“She stresses how a deal could defuse a potential source of conflict between Israel and Hezbollah, which is heavily armed and backed by Iran, but says there is great caution in the military establishment.

“The IDF has been on a high alert for months and is ready for every scenario of deterioration,” Ms Mizrahi says. “Maybe Nasrallah could do something not against the rig but along the border.”

“Maybe he would like a contained military conflict that would serve him because he needs to be seen as the defender of Lebanon, to justify why Lebanon needs this very strong independent militia.””

Failing to mention the terrorism which preceded the First Lebanon War, Knell tells readers that:

“Israel and Lebanon have a history of bloody wars. Israel invaded Lebanon during the latter’s civil war in 1982. In 2006, a cross-border raid by Hezbollah triggered a month of fighting.”

Two days after the appearance of Knell’s report, the US presented its proposal to the Lebanese president. Whatever the eventual outcome of this latest stage of the negotiations, it is clear that BBC audiences have still not been told the whole story.