The November 2nd edition of the BBC World Service radio programme ‘OS’ (formerly known as ‘Outside Source’) led with an item (from 00:04 here) concerning the previous day’s general election in Israel. 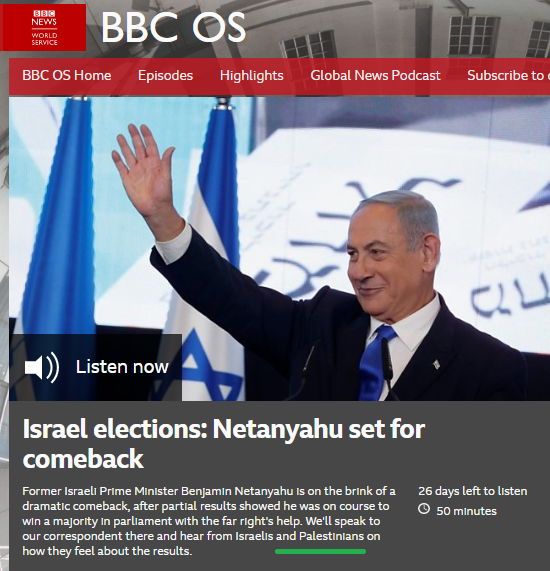 The format of that programme includes voice messages sent by members of the public around the world and following a report from the BBC Jerusalem bureau’s Tom Bateman, presenter James Reynolds told listeners (from 01:55):

Of the two messages chosen by the OS team for worldwide amplification, only one in fact came from a person who had voted: a woman living in Lod who stated that she had cast her ballot for the ‘Jewish Home’ party.

The second message (from 03:30) came from an Israeli citizen who had chosen not to vote and who presented herself in a manner which listeners may well have found confusing or offensive. [emphasis in bold added]

“My name is Nasreen Randour [phonetic]. I’m a Palestinian living in occupied Palestine. I’m a business owner and an activist. I’m 43 years old and I’ve decided for the first time in my life not to vote.”

Reynolds did not bother to explain to listeners that a small minority of the Israeli citizens he previously described as Arab Israelis self-identify as Palestinian and that the people BBC audiences are used to hearing described as Palestinians vote in Palestinian Authority elections (if and when they take place) rather than Israeli elections.

Neither was any effort made to clarify that Randour’s reference to “occupied Palestine” actually means Israel – rather than the areas BBC audiences usually hear portrayed as “occupied” – and that her obviously politically motivated use of that term in fact negates Israel’s existence.

Clearly Reynolds and his production team had two reasonable choices. One was to explain to listeners worldwide – thereby enabling them to put this contribution into its correct context – that the term “occupied Palestine” in fact constitutes a denial of Israel’s right to exist.

The second choice was not to broadcast overtly political messaging which negates the existence of a sovereign country.

Notably, BBC World Service radio elected not to make either of those choices and instead gave worldwide amplification and mainstreaming to that blatantly offensive messaging.