An article by Guardian Science editor Ian Sample on a major archeological discovery in Israel managed to avoid using the word “Israel” even once – including in the introduction, where the location of the artifact is alluded to.

First, here’s the headline and strap line of the Nov. 9th piece. 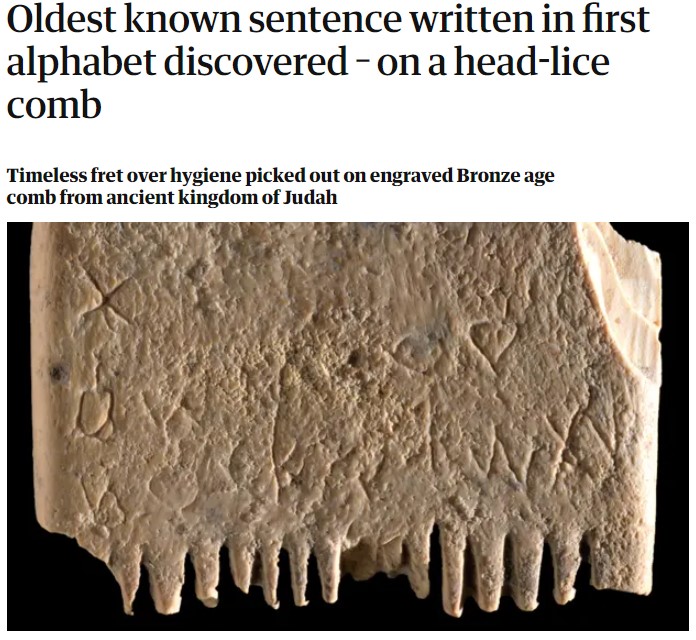 It’s a simple sentence that captures the hopes and fears of modern-day parents as much as the bronze age Canaanite who owned the doubled-edged ivory comb on which the words appear.

Believed to be the oldest known sentence written in the earliest alphabet, the inscription on the luxury item reads: “May this tusk root out the lice of the hair and the beard.”

Unearthed in Lachish, a Canaanite city state in the second millennium BCE and the second most important city in the kingdom of Judah, the comb suggests that humans have endured lice for thousands of years and that even the wealthiest were not spared the grim infestations.

Of course – as every other international outlet we read which reported on the discovery noted – Lachish today is an archeologal site in southern Israel, near Kiryat Gat.

We’ve contacted Guardian editors, who upheld our complaint and modified one of the sentences accordingly:

The comb, which measures 3.5cm by 2.5cm, was discovered at the site in south-central Israel in 2017, but the shallow engravings on the surface were only spotted in December last year

The following addendum was also added:

Chris McGreal attacks pro-Israel group: aka, it’s a day that ends with “y”.