The January 18th afternoon edition of the BBC World Service radio programme ‘Newshour’ included an item (from 45:05 here) which was introduced by presenter Razia Iqbal as follows: [emphasis in italics in the original, emphasis in bold added]

Iqbal: “Now, to the contentious issue of the status of the city of Jerusalem. When the former US president Donald Trump recognised the city as the capital of Israel, it broke with seventy years of policy. Since the Biden administration took over, there’ve been many reversals of policy decisions but not this one. And the decision to relocate the US embassy from Tel Aviv to Jerusalem looks as though it will also proceed.”

The US embassy in Jerusalem was of course already opened in May 2018. As we see, Iqbal continues to promote a narrative that BBC audiences have been hearing since late 2016 concerning “seventy years of policy”. That narrative erases the fact that previous US presidential candidates – both Republican and Democrat – pledged to relocate the US embassy to Jerusalem during their election campaigns. It also ignores the existence of the 1995 Jerusalem Embassy Relocation Act and the related bi-annual presidential wavers.

Failing to clarify that the proposed site of the new US embassy building is located west of the 1949 Armistice Line in the Talpiot neighbourhood, Iqbal continued:

Iqbal: “It’s now apparent that a possible site for the embassy is on land called the Allenby Barracks, part of which belongs to the family of Professor Rashid Khalidi, a professor of modern Middle Eastern history at Colombia University in New York.”

Listeners then heard an interview with Rashid Khalidi – who had published an op-ed in the New York Times on the same topic three days earlier and has been campaigning on the long-running issue for some time – in which Iqbal asked:

Iqbal: “On the issue of the building of a US embassy in Jerusalem, what do you know about the land that will be used to do that?”

Khalidi: “What we know – have always known – is that most of this land is privately owned Palestinian land. Many of the owners, many of the descendants of the owners, are – as it happens – US citizens. This has always been known. We, a group of heirs, descendants of owners, presented this evidence to the then Secretary of State Madeline Albright in the late 1990s and the State Department took note of it and at that point the plan was frozen. So we’ve known about this and it has been known by the State Department – unless they don’t know how to access their own archives – for the better part of 25 years. We’ve known it, the Israeli government knows it, the US knows it.”

Later on Khalidi mentioned the related planning documents that have been submitted to the Jerusalem planning authorities, stating:

Khalidi: “And Adalah, the legal group that represents all of the Arabs, is filing an objection to this planning document which we will have the results of towards the end of this month.”

Referring to what he termed the “so-called Allenby Barracks site”, he later added:

Khalidi: “This is a site that the British government during the mandate period before 1948 rented from my family and a large number of other families for use as a British military barracks. That site is going to be the embassy if the United States plans that have been submitted to the Israeli planning commission go ahead.”

In July 2022 the NGO ‘Adalah’ published documents dating from May 1947 which show a “hiring agreement” between several individuals and the Government of Palestine – i.e. the British mandate authorities. All those documents relate to a block numbered 30113 which, as can be seen on a map from the same era, made up one part of the Allenby Barracks. Adalah claims that the plots concerned were expropriated by Israel in 1950 under the Absentees Property Law but does not address the topic of any compensation that may have been received.

The area known as the Allenby Barracks was originally an Ottoman military site set up in 1916 during the First World War which included an airfield for the use of their German allies. The site was conquered by the British in late 1917 and used as a military base up until the end of the mandate period.

As the British mandate came to an end, the mandate authorities handed over that site and other military camps in Jerusalem to the Jordanian Arab Legion. The site was captured by Israeli forces during the War of Independence which broke out when surrounding Arab countries attacked the nascent Israeli state.

In 1950 a financial agreement was signed between the Israeli and British governments. Under that agreement, part of the Allenby Barracks remained under British ownership. 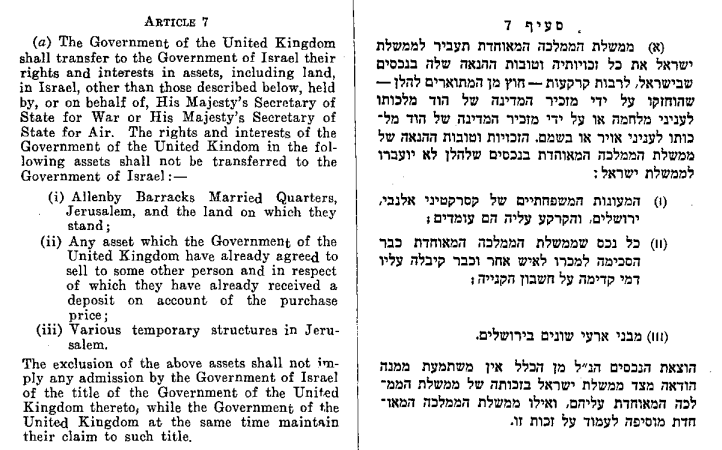 In 1964 the British government agreed to sell part the Allenby Barracks to the Israeli government for 140,000 British pounds and in November 1966 the sale was completed. As can be seen in the document below (p.44), the area is numbered Block 30113 – the same number as the block including the plots claimed by Rashid Khalidi and others. 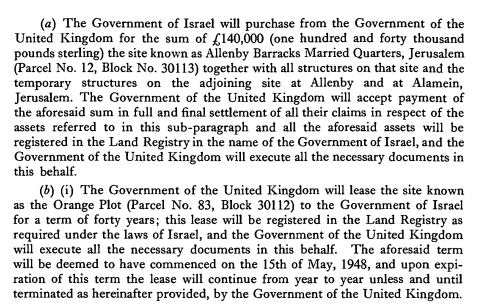 Clearly this topic is far more complex that listeners to ‘Newshour’ would understand from Rashid Khalidi’s obviously partisan version of the story. While Iqbal did say at the end of the item that a response had been requested, but not received, from the US State Department, no right of reply was given to any Israeli representative – for example from the Jerusalem planning department or the government – which would enhance audience understanding of the issue.