One would expect that even a rudimentary knowledge of history, coupled with a sense of common decency, would prevent educated intellectuals of the 21st century from publicly promoting anti-Semitic conspiracy theories reminiscent of ‘The Protocols of the Elders of Zion’, particularly in light of the recognition of the influence of such malicious rumours in inciting anti-Semitism and the tragic evidence available regarding the power of ‘the big lie’.

For clarity, the definition of anti-Semitism as codified by the EU Monitoring Committee includes:

“Making mendacious, dehumanizing, demonizing, or stereotypical allegations about Jews as such or the power of Jews as collective — such as, especially but not exclusively, the myth about a world Jewish conspiracy or of Jews controlling the media, economy, government or other societal institutions”

You’d think such a clear and concise definition of what constitutes hate would make any respectable writer steer clear of the ‘Jews control the media and/or the US government’ tropes.

One could also reasonably expect that a newspaper defining itself as ‘the world’s leading liberal voice’ would avoid promoting similar ideas to those expressed on neo-Nazi white supremacist or Jihadist websites or repeating motifs found in the press of the world’s most abhorrently repressive regimes . 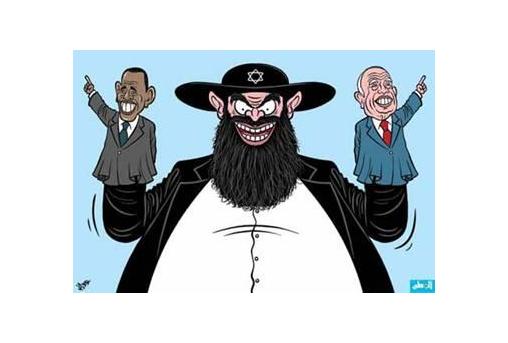 This caricature, drawn by cartoonist Jihad ‘Awartani, was featured in Al-Watan, a leading newspaper in Saudi Arabia.

One could expect all those things, but not, it seems, from the Guardian, which has yet again allowed its correspondent Jonathan Steele to publish an article wavering somewhere between the paranoid and the hallucinatory, spiced with a generous pinch of incitement.

Steele glibly dismisses the increasingly justified fears of Israelis regarding the intentions of Iran and even redefines them as a ‘diversionary ruse’.

“It may also be a message to Obama not to go on falling for Netanyahu’s diversionary ruse that resolving Israel’s dispute with the Palestinians is a sideshow compared to the issue of Iran getting the bomb.”

He informs us that an opinion poll (with which he apparently agrees – he certainly does not introduce any contrary view into the argument) shows that:

“88% of its respondents named Israel as the world’s biggest threat, followed by the US at 77%. Only 10% cited Iran”

And, he goes on to employ such inflammatory and erroneous terms as “Israeli piracy” and “illegal house-building in Arab East Jerusalem.”

By now Steele has got nicely into his stride, and having contorted reality enough to convince the reader (and himself) that democratic Israel is a far greater evil than the world’s worst theocratic, human rights abusing dictatorship, slips niftily into the realms of anti-Semitic conspiracy theory.

“Just as important is the pressure that pro-Israel campaigners put on the mainstream US media. They warn people off the very word Zionist as though only antisemites use it and demand Israel be treated as a special country whose politics deserve more sympathy than others.”

“In fact US publishers, editors, and reporters carry the biggest responsibility for the rotten state of US policy in the Middle East. The pro-Israel lobbies are powerful and Obama weak mainly because Americans rarely get an alternative view.”

The euphemistic refinement of the employment of the words ‘pro-Israel lobby’ instead of ‘Jew’ does nothing to detract from Steele’s message: Obama has been emasculated by the Jewish-controlled media to such a degree that he cannot do what must be done in the Middle East. In other words, Jews are dictating and shaping American foreign policy for their own evil ends.

Even Sergei Nilus – responsible for publishing for the first edition of The Protocols of the Elders of Zion in Russia – could probably never have dreamed that 105 years on, the forgery would still provide so much inspiration to a member of the media in the free West.  But Steele, of course, is no stranger to the types of contorted arguments and conspiracy theories so common in the Islamists’ repertoire – he has been promoting them for nigh on a decade.

In 2002, some seven months before it took place, Steele was busy spreading the idea that the US military operation in Iraq was a product of Israeli pressure. In 2004 he described Israeli concerns about Gaza turning into a Jihadi missile base as ‘hyperbolic nonsense’.

“Israel’s UN ambassador, Dan Gillerman, bizarrely links the issue of Gaza to that of missiles, as though this wretched and poverty-stricken corner of the illegally occupied territories is on a par with Saddam Hussein’s Iraq and the notorious 45-minute claim.

Using the argument that Israel’s army had gone in to root out workshops making rockets, he declared: “The whole of Gaza, and Rafah in particular, is on the verge of becoming a missile base aimed at Israel’s cities and civilians. What would the international community have Israel do? Just sit back and wait for this horrific scenario to materialise?”

This is hyperbolic nonsense. The record shows that for decades Gaza was not used as a base for suicide bombers. Apart from one attack that killed four soldiers at the Erez crossing out of Gaza in January this year and another that killed 10 civilians at Ashdod in March, the suicide bombers all came from the West Bank.

Similarly, unlike the large number of West Bank settlers who have died in Palestinian attacks, almost no Israeli settlers in Gaza have been killed. It was a rare exception when gunmen recently shot Tali Hatueland (sic) and her four children; she was a militant settler who was driving out of the strip to attend a rally protesting at Sharon’s announcement that he plans to withdraw from Gaza. The Israeli embassy in London has tried to use her death to justify the army’s incursion into Rafah, even though it occurred several miles from Rafah and she was not shot by any of the Palestinians’ vaunted ‘missiles’.”

(It should be noted that Steele published this piece in a journal called Occupied Palestine.  Occupied Palestine is an online periodical which routinely has featured such objective voices as Noam Chomsky, Norman Finkelstein, Jeff Halper, Alexander Cockburn, and Sara Roy – a cadre of writers which include many who openly reject the right of Israel to exist within any borders.)

Steele’s obvious disdain for humans of the Israeli variety, as displayed by his contemptuous caricature of the murder of Tali Hatuel, her four daughters and her unborn son, which he somehow sought to excuse on the basis of their mother being a ‘militant settler’ – is also echoed in an article he wrote in 2005 describing the Israeli disengagement from Gaza .

“Perhaps the ugliest part of the Israeli settlers’ behaviour was their corruption of youth, with parents instigating their children to wrap themselves in prayer shawls and sob or shriek defiance.”

In 2006 Steele declared the Hamas electoral victory in Gaza to be “the best news from the Middle East in a long time”, and advised that:

“[a]bove all, Europe should not get hung up on the wrong issues, like armed resistance and the ‘war on terror’.”

Steele informed his readers that:

“Hamas’s refusal to give formal recognition of Israel’s right to exist should also not be seen by Europe as an urgent problem.”

Predictably, Steele also has a penchant for Tehran’s ‘misunderstood’ president.

“The Iranian president was quoting an ancient statement by Iran’s first Islamist leader, the late Ayatollah Khomeini, that ‘this regime occupying Jerusalem must vanish from the page of time,’ just as the Shah’s regime in Iran had vanished. He was not making a military threat. He was calling for an end to the occupation of Jerusalem at some point in the future. The ‘page of time’ phrase suggests he did not expect it to happen soon.”

“Neither Khomeini nor Mr. Ahmadinejad suggested that Israel’s’vanishing’ was imminent or that Iran would be involved in bringing it about. But the propaganda damage was done…and Western hawks bracket the Iranian president with Hitler as though he wants to exterminate Jews.”

In 2009 Steele was dispensing advice to America’s new president which included bringing terror organizations into the fold:

“If Washington can talk to North Korea and Iran, it has no reason to boycott the people who won the last Palestinian elections and are likely to win the next one. Far from defeating Hamas, Israel’s war on Gaza has made it stronger while further rein forcing Israel’s image as a bully. By the same token, the US needs to talk to Hezbollah in Lebanon. Israel’s war on Hezbollah in 2006 was as brutal as its war on Gaza this year, nothing more than the old strategy, taken to a grotesque level, of demolishing homes as a collective punishment.”

Steele also has no qualms about justifying terrorism – albeit elegantly gift wrapped as ‘resistance’:

“The main source of tension in the ­Middle East and the Gulf is not Iran, but Israel’s occupation of Palestinian lands. An old issue cannot be hidden by a new one. Until Israel pulls back to the 1967 borders, give or take some land swaps, under international agreement, Palestinian resistance will continue – and other states will be entitled to support it.”

Given the ample available insight into Jonathan Steele’s views, it is quite obvious what genre of Middle East policy he thinks America should, and would, be adopting if only it weren’t for those all-powerful members of the mysterious ‘Israel lobby’ which, according to Steele, renders the US president impotent.  Steele’s world view flirts so passionately with well-established anti-Semitic tropes frequently employed by neo-Nazis and the Islamist nihilists, that you’d think he would be considered a liability by any serious mainstream media outlet.

Not so at Guardian HQ, apparently: despite Steele’s blindingly obvious incompetence in the field of Middle East analysis –  so plainly the unfortunate result of extreme political ideology taking over where knowledge and logic leave off – the Guardian editors still permit him to peddle anti-Semitic incitement under the guise of ‘informed’ comment.

That’s exactly the sort of thing, of course, that one can read daily in many a newspaper coming out of Damascus, Tehran, Cairo or Riyadh, but at least those publications have the honesty not to claim to be ‘the world’s leading liberal voice’.

Like Loading...
Tags from the story
Antisemitism, Comment is Free, Guardian, Jewish Conspiracy, Uncategorized
Written By
Israelinurse
More from Israelinurse
Every cloud has a silver lining, or so the saying goes. So...
Read More