It looks like the anti-Israel blogosphere in the UK that the Guardian’s ‘Comment is Free’ has dominated for many years is about to get a new competitor.

Arianna Huffington, the multi-millionaire who recently sold the Huffington Post – which garners over 25 million unique visitors a month and is listed by Technorati as the most popular political blog in the U.S.  – to AOL for $315 million, is about to launch a UK edition of her far left behemoth.

For those unfamiliar with the Huffington Post, which I’ve been referring to as the American Guardian for some time now – due to its egregiously anti-Israel political orientation, and tolerance of anti-Semitism beneath the line – I’d suggest visiting our friends at Huffington Post Monitor and Huff-Watch.

Also see the report by CAMERA, “Has the Huffington Post become a magnet for Israel haters?“

Finally, here are a couple of Huffington Post classics.

Comparing the IHH sponsored Mavi Marmara to the 1947 ship of Holocaust refugees, The Exodus:

And, here’s the Huffington Post’s legitimization of the Israeli Organ Harvesting libel: 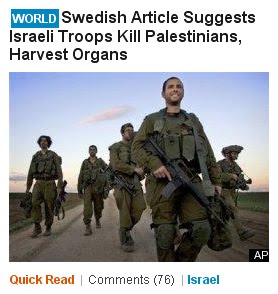