First, it was a Mossad Vulture which somehow managed to avoid Saudi air defenses and land in the Kingdom’s territory, and now, in what can only be described as a shocking ideological security breach, Israeli manufactured pencils have somehow infiltrated the Saudi market! 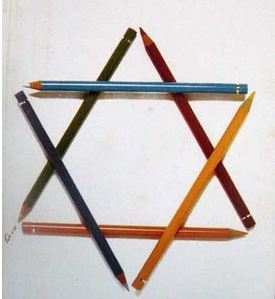 Saudi authorities are investigating how Israeli pencils reached one of the kingdom’s biggest retail chains. The Kravitz chain, which markets the pencils in Israel.

The Kravitz chain, which markets the pencils in Israel, was surprised to hear about the affair stirring up the Gulf kingdom.

It turns out that Abu Rialin, a Saudi chain which offers all of its items for two riyals, is selling one of Kravitz’s most popular products – a set of 12 pencils with an eraser.

The pencils are sold with the Kravitz logo in Hebrew and without any attempt to conceal the fact that they are made in Israel.

Kravitz learned about the incident following a report published by Saudi website Jaza.

Interestingly, on the same day this Zionist Import Scandal was revealed in YNet, the paper also reported that, despite promises to clean up violent and antisemitic content, recent editions of school textbooks in Saudi Arabia continue teach school children to kill Jews.

The news network, which was able to obtain translated copies of the recently printed books from the Institute for Gulf Affairs in Washington, DC, said that the books teaches ninth graders that the annihilation of Jews is imperative.

And, to think.  Unsuspecting Saudi educators may one day shockingly discover that various scribbling, doodles, and lesson notes written on the very pages of school textbooks urging Saudi children to kill Jews, may have actually been written by the students’ Zionist pencils!

Like Loading...
Tags from the story
Anti-Zionism, Antisemitism, BDS, General-antisemitism, Saudi Arabia
Written By
Adam Levick
More from Adam Levick
Last week we posted about a Guardian article by Donald Macintyre on a confidential...
Read More