A report in YNet reads:

The European Union issued Tuesday a corrected version of a speech by its foreign policy chief which had angered Israel because it appeared to link a French school shooting and Gaza.

The new transcript of Catherine Ashton’s remarks mentions the situation of children in both Gaza and the southern Israeli town of Sderot after the first version only mentioned the Palestinian territory. 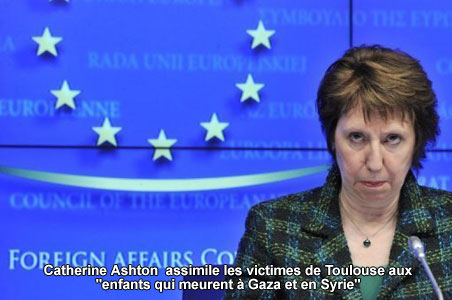 So there it is – a “balanced view” of the shooting of a father his two children, and a little girl pursued into the school in order to be shot at point-blank range, and possibly even photographed by the killer with a camera French police have reported they believe he wore around his neck.

“I am really saddened by the distortion of my remarks,” she told the EU parliament’s foreign affairs committee. “I drew no parallel whatsoever between this tragedy and events elsewhere in the Middle East.

“I condemn unreservedly the terrible murders at the Ozar Hatorah school in Toulouse yesterday and extend my sympathies to the families and friends of the victims, to the people of France and the Jewish community.”

Leaving aside the obvious fact that Gaza and Sderot are commonly considered to be in the Middle East, her comment is self-serving, to say the least. Are we supposed to laugh or cry when we read her feeble attempt to exonerate herself? Obviously she “drew a parallel” in the typical over the top way that Israel is criticized at every opportunity – or even when there can be no opportunity.

If we want to draw parallels, there are many to draw from, and Israel’s defensive operations in Gaza are not among them. Here are some real parallels:

The only parallel is that in all these cases terrorists sought out Jews in order to kill them just because they were Jews. One can find only one or two similar cases perpetrated against Muslims in Europe or in Israel but Israel does not go into Gaza with the express purpose of killing unarmed parents and their children and there can be no comparison with a response to terror and the acts of terrorists like the perpetrator of the Toulouse massacre.

Shame on the EU if it keeps this reprobate on as their EU Foreign Minister. The only job she is suited for is as a columnist at the Guardian.

0 replies on “Should we laugh or cry over Catherine Ashton’s remarks about Toulouse massacre?”