As French police continue to negotiate for the surrender of the man they suspect to be behind the killing of a rabbi and three children at a Jewish school in Toulouse on Monday (30-year-old Rabbi Jonathan Sandler, his children Gabriel, 4, and Arieh, 5, and the daughter of the school’s principal, seven-year-old Miriam Monsonego), we now know a few things.

He wasn’t in the least bit agitated or nervous or excited; just very, very calm and convinced about what he was saying, and very polite. He said this was only the beginning and that there would be more attacks, [adding] ‘I’ll either go to prison with me head held high or die with a smile on my face.'”

The Guardian’s Live Blog on the unfolding drama, as with so much of what passes for reporting on issues relating to the threat posed by radical Islam, are filtered through their egregiously skewed ideological blinders.

Who’s to blame? The murderer? Al-Qaeda? Racial Islam? No, Anti-immigrant rhetoric from Sarkozy.

As Reuters points out, immigration and Islam have been major themes of the election campaign as Sarkozy tries to woo supporters of the far-right leader Marine Le Pen. Analysts say the shootings could transform the election debate and possibly tone down the populist rhetoric. [emphasis added]

This is more than obscene. It’s also nonsensical.

We’re to believe that an al-Qaeda trained terrorist shot Jewish children in cold blood because of the alleged anti-immigrant, populist rhetoric of the French Presidential campaign?!

Further, it’s as if they’re bending over backwards to avoid the more intuitive conclusion: The brutal killing of innocent Jews by a French Islamist vindicates the concerns of Sarkozy and others about the dangers of radicalization, and the failure of such citizens to assimilate into society.

The funeral for the victims held this morning in Jerusalem for the French Jewish victims: Reporter Phoebe Greenwood emphasizes Jewish calls for vengeance:

Dispatch from 10.09am, from Greenwood:

There was a long list of very emotional speakers from both France and Israel and all have spoken with deep emotion about the shootings in Toulouse. The chief rabbi broke down in tears as he vowed that there would be vengeance for their deaths; that God will avenge their deaths… [emphasis added]

The Jewish people face wild and insatiable animals, wild animals made crazy by their hatred,” the speaker of parliament, Reuben Rivlin, said in a eulogy at the burial site.

So, even at the funeral, where the unimaginable grief of the victims’ family and friends must have been suffocating, the Guardian decided to focus on the theme of Jewish vengeance, and the remark by one Israeli official characterizing those responsible for the crime as “wild animals”.

More broadly, as Barry Rubin observed about the reaction to the Toulouse murders:

What a tragic, evil joke. An [Islamist] shooter in the beautiful, almost magical, city of Toulouse, France, murders three Jewish children and a teacher in front of their school. Various VIPs issue statements about how terrible is this deed, how unspeakable.

And yet at that very moment, the next round of murders, the next slanderous and inciting antisemitic lies are being perpetrated by respectable people and institutions. There is no real soul-searching, no true effort to do better, no serious examination about how the anti-Israel and anti-Jewish hysteria is paving the way to murder… [emphasis added]

During the attack at the Jewish school, when the suspect’s 9mm weapon jammed he switched to a .45-calibre gun, entered the school gates and chased children as they fled for cover. He reportedly cornered eight-year old Miriam, the daughter of the school principal, Yaacov Monsonego (the blond haired girl in the photo above).

He then put the gun to her and fired a bullet through her head.

Though more Guardian reports on the shooting will be forthcoming, we can can be certain that the vital and unmistakable moral lessons of such incomprehensible evil – an extremist antisemitic ideology which views even Jewish children as legitimate targets – will not be included in their coverage.

Such painfully obvious truths about the danger posed by Islamic antisemitism are simply not part of the narrative. 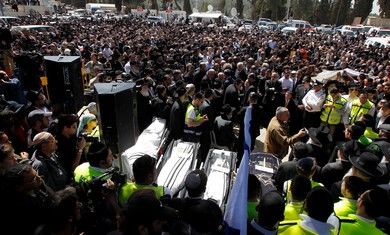