Readers will probably remember the May 2011 article by Harriet Sherwood in which she claimed that the Knesset is built upon the former farmlands of the abandoned village of Lifta which lies at the Western entrance to Jerusalem.  That claim – and others – was quickly disproved at the time by Honest Reporting, who also noted that the BBC’s Wyre Davies had filed a similar report the day before Sherwood’s article was published.

Both Sherwood’s article and Davies’s report included videos featuring a former resident of Lifta named Yakoub Odeh, whose romantic memories of village life among olive and pomegranate trees were given extensive coverage. But neither Sherwood nor Davies apparently bothered to fact-check either the accommodating Mr Odeh’s connections or the less sentimentally picturesque sides of the village’s history.

A series of old newspaper cuttings from the now defunct newspaper ‘Davar’ reveals that Lifta had a long history as a base for attacks against neighbouring Jewish villages and traffic on the nearby Jerusalem-Tel Aviv highway.

This cutting from September 2nd, 1929 – ten days after the commencement of the riots which included massacres in Hebron, Tsfat , the village of Motza (located near Lifta) and many other places – reports that “This morning a search was conducted in Lifta. 250 [British] soldiers surrounded the village whilst 5 aeroplanes circled above it. 150 people were arrested.”

Throughout the riots of 1936-1939, Lifta was frequently in the news. This report from September 1st 1936 follows previous ones (see here, here and here)  on the subject of the British Mandate forces searching the village for members of the gangs which carried out violent attacks on Jews.

Search in the village of Lifta

During the night a big search was again carried out in the village of Lifta. At 4 am the village was surrounded by hundreds of [British] soldiers. They searched houses, cow sheds and also in the fields. The search continued until 7 am. The results are not known, but two vans brought detained Arabs from Lifta to the police in Jerusalem for questioning.

This report from September 21st 1936 tells of repeated shooting and bombing attacks on an old-age home near Romema, Jerusalem and the British army’s demolition of a house in Lifta as a result. On May 18th 1937, ‘Davar’ reported that the police had discovered “four big sacks full of explosives” – two in a house in Lifta and two near the village of Malha.

In 1938, several incidents of shootings from Lifta at vehicles travelling along the Jerusalem-Tel Aviv road were reported. On January 26th 1938 ‘Davar’ covered the bombing of a lorry transporting oranges in which two Yemenite Jews from Sha’araim were badly injured, (one of whom later died) pointing out that this was one of many attacks which had taken place right by the village of Lifta.

The shooting of a Yeshiva student near the Diskin Orphanage in Romema in June 1938 resulted in a warning to the village elders from the British authorities. 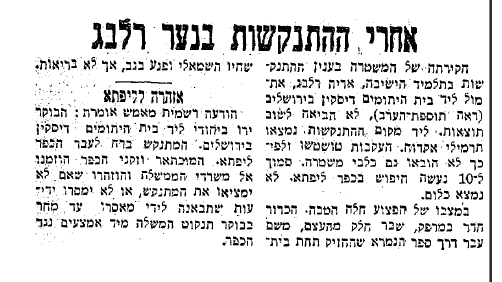 A Warning to Lifta

An official announcement from last night says: This morning a Jew was shot near the Diskin Orphanage in Jerusalem. The assailant escaped towards the village of Lifta. The Muktar and village elders were summoned to the Government Offices and there warned that if they do not find the assailant, or if they do not give information leading to his arrest by tomorrow morning, the government will immediately take steps against the village.

A report from the next day – June 2nd 1938 – shows that the village elders refused to co-operate and so the British authorities established a police station in Lifta – to be paid for by the villagers as a fine.

With the UN acceptance of the partition plan on November 29th 1947 came renewed violence, with Lifta once more returning to its role as a base for attacks on Jewish suburbs of Jerusalem and the nearby road to Tel Aviv.

In early December 1947, the residents of Lifta received orders from the Arab Higher Committee to evacuate the village’s women and children to Ramallah and Lifta was made into a base for the Najada militia, from which attacks were launched on Jewish neighbourhoods on Jerusalem’s western side such as Kiryat Moshe, Givat Shaul and Romema. The last of the civilian residents of Lifta left in January or February 1948 for Ramallah as the Haganah took action against the militia stationed in the village. Later, some of Lifta’s residents were housed in the homes of Jews expelled by the Jordanians from the Jewish Quarter of the Old City of Jerusalem.

After the 1949 Armistice Agreement, two-thirds of Lifta’s farmlands, as well as the village itself, remained on the Israeli side of the ‘green line’, whilst the remaining third came under Jordanian control and military installations were built upon them – including at Tal al Mudura –  or as it is today known, Givat HaMivtar.

Although Harriet Sherwood stated in her article that the village owned 1,200 hectares of land in 1948 and had a population of three thousand, the December 1945 ‘Village Statistics’ survey carried out by the Anglo-American Commission of Inquiry recorded 2,550 residents and 8,743 dunams of land (874.3 hectares), 756 of which were owned by Jews. In 1934, a land merchant from Lifta had been murdered by nationalist locals for selling land to Jews and the village’s Muktar, Mahmoud Issa, had received threats of murder for the same activity.

And what of the sprightly Mr Yakoub Odeh who inspired Harriet Sherwood’s romantic descriptions of freshly baked bread dipped in locally made olive oil and luscious fruit groves? Well, Odeh’s nostalgia is – to say the least – partially professional.

He is active in the US-founded ‘Lifta Society‘  (even appearing on its website’s banner) and collaborates with the anti-Israel NGO ‘Zochrot‘ which accuses Israel of ‘ethnic cleansing’ and advocates the ‘right of return’ for Palestinian refugees. Zochrot has been campaigning on the subject of Lifta for some time (with financial help from Protestant churches in Holland) and Yakoub Odeh has been the star of a Zochrot-organised press and media tour to the village (as well as many others), as documented by an employee of the Mennonite Central Committee.

Yakoub Odeh is also connected to the Land Research Center – a Palestinian NGO established in 1986 by Faisal Husseini – ironically a relative of the infamous Haj Amin al Husseini who once headed the same Higher Arab Committee which ordered Odeh’s relatives to leave their village in 1947.

The Land Research Centre (which, despite its participation in the BDS campaign, has received funding from the UK via DFID) engages in the production of reports, often in collaboration with ARIJ and with EU financial support, which do little to hide their political motivations, going under the banner of “Monitoring Israeli Colonisation Activities in the Palestinian Territories”. In one such recent report, the Land Research Centre reportedly stated that:

“The Land research center warned that the Israeli occupation government intends to bring more Jews from all over the world to occupied Palestine in order to change its demographic composition and annex more lands for their settlements.

The center said in a report that the Israeli legislation regarding the construction of roads for Jewish settlers so as to protect what they call the state lands reveals that Israel’s occupation of Palestinian territories is aimed to Judaize them and bring Jews to live in place of the Palestinian natives.

The Israeli occupation annexed the Palestinian lands, destroyed agricultural lands, demolished homes, displaced their residents, built settlements for Jewish settlers and then unleashed them to control the tops of mountains, expand their outposts, launch attacks on Palestinian property and then set up an apartheid wall that dismembered Palestine and isolated and besieged its villages, it added.”

When journalists fail to check facts and sources, they inevitably run the risk of misleading the public. In the Middle East, they also run the added risk of voluntarily co-opting themselves to act as amplifiers for political campaigns – thereby undermining their own status as accurate and impartial reporters.

Let us hope that in the 15 months which have passed since Harriet Sherwood and Wyre Davies visited Lifta, they have come to appreciate that – like the misspelled graffiti in that village, featured and carefully subtitled in the Guardian’s video to point out that it is in Hebrew – things are often best not taken entirely at face value in such a complex part of the world. 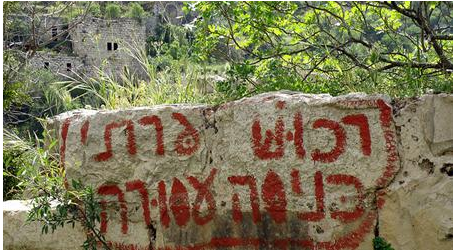