The Guardian’s coverage of the culmination of the civil law suit brought by the parents of Rachel Corrie, the verdict for which was handed down in Haifa on Tuesday August 28th, has become obsessive.

On Sunday August 26th Harriet Sherwood wrote a long pre-emptive puff piece based on an interview with the Corrie family. Notably – despite the recent “bruising” Guardian scandal on the subject of conflicts of interest – Sherwood saw fit to promote the play ‘My Name is Rachel Corrie’ in her article, but failed to mention that it was co-written by her Guardian colleague Katherine Viner.

“The family released Rachel’s emails to the media. “It was the Guardian that picked them up very quickly, and it was huge, very significant. All kinds of things came from that.” Rachel’s powerful writing was adapted into an acclaimed stage play, My Name is Rachel Corrie, performed in at least 10 countries, including Israel.”

On Monday August 27th Sherwood was back with another one-sided article, opening with the following odd – and completely evidence-free – “etched in stone” declaration:

“Her blonde hair, megaphone and orange fluorescent jacket with reflective stripes made 23-year-old Rachel Corrie easily identifiable as an international activist on the overcast spring afternoon in 2003 when she tried to stop an advancing Israeli military bulldozer.”

Tuesday August 28th found Sherwood in Haifa, reporting from the court, with one article published at 08:05 BST (less than an hour after the verdict was given) containing a mere six sentences on the verdict itself, and with the rest of the article devoted to the Corries’ point of view.

At 11:31 BST, Sherwood published another article on the same subject which included videos of the Corrie family.

At 12:43 BST the Guardian published a particularly malign piece by Chris McGreal  which included – among many others – the following bizarre claims. (Emphasis added)

“An Israeli judge on Tuesday perpetuated the fiction that Corrie’s death was a terrible accident..”

“…her death was not arbitrary but one of a pattern of killings as the Israeli army pursued a daily routine of attacks intended to terrorise the Palestinian population of southern Gaza into submission.”

“The case laid bare the state of the collective Israeli military mind, which cast the definition of enemies so widely that children walking down the street were legitimate targets..”

“With that went virtual impunity for Israeli troops no matter who they killed or in what circumstances – an impunity reinforced by Tuesday’s verdict in Haifa.”

[For more on the subject of the choice of term ‘impunity’, see here. ]

At 15:49 BST the Guardian had Glen Greenwald jump in with an article on “How the US and Israeli justice systems whitewash state crimes”.

Harriet Sherwood was back at 20:49 BST with dark prophecies concerning a “dangerous precedent” and a “legal black hole” which she tried to shore up by means of quotes from the much discredited NGO Human Rights Watch and Shawan Jabarin of Al Haq – a man with alleged ties to the PFLP.

At 22:10 BST the Guardian published an editorial on the subject and at 22:25 BST it published the cartoon below, which has since been discussed at The Commentator. 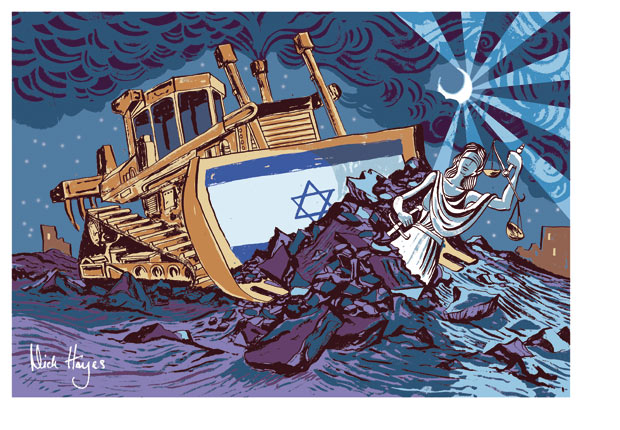 On Wednesday August 29th at 10:29 BST, a further article on the subject was published – written by Ami Kaufman of the far Left 972 magazine.

In other words: eight articles, one editorial and a cartoon; all on the same subject, all in the space of less than 72 hours. And still counting.

Particularly interesting is the editorial, because it represents not just the random views of a specific writer, but the Guardian’s editorial stance on the subject. From it, we learn much about the Guardian’s blind and unquestioned faith in the automatic guilt of Israel.

“Perpetuating the myth that her death was a tragic accident, the judge did not deviate from the official line.”

A myth is “a popular belief or tradition that has grown up around something or someone”. By its very nature as a belief, it is not based on facts. So for the anonymous writer of this editorial, and by extension the Guardian editorial team as a whole, no matter what facts and evidence are presented, they are to be rejected because the possibility that Rachel Corrie’s death could be a tragic accident is something which in their view will never be proved or even accommodated. It is also, by insinuation, a possibility which should be scorned by the ‘enlightened’ – as myths usually are.

The editorial goes on to point out disparagingly that “the investigators initially assigned were 19 years old”. Whether or not that is in fact the case I cannot say, but as anyone who knows anything about Israel is aware, yes – young people here take on extraordinary responsibilities at an early age during their army service (the investigators would have been part of the Military Police’s investigation unit). In a country in which 19 and 20 year-olds also pilot F16s, the suggestion that age is a reflection of ability or responsibility is both a ridiculous and tacky tactic.

Had whoever wrote this editorial even bothered to read either the court’s decision (over 60 pages) or at least the English language summary before putting finger to keyboard?  Apparently not, because if they had, they could not – in honesty – have written the following:

In fact, the court established otherwise.

“The mission of the IDF force on the day of the incident was solely to clear the ground.  This clearing and leveling included leveling the ground and clearing it of brush in order to expose hiding places used by terrorists, who would sneak out from these areas and place explosive devices with the intent of harming IDF soldiers.  There was an urgency to carrying out this mission so that IDF look-outs could observe the area and locate terrorists thereby preventing explosive devices from being buried.  The mission did not include, in any way, the demolition of homes.  The action conducted by the IDF forces was done at real risk to the lives of the soldiers.  Less than one hour before the incident that is the focus of this lawsuit, a live hand-grenade was thrown at the IDF forces.”

All the same, the employment of the ‘home demolition’ meme allows the writer to launch into a tirade of misinformed conjecture on the subjects of “collective punishment” and military law. From there, he or she moves on to the emotive subject of the deaths of Palestinian children during the second Intifada.

Of course no mention is made whatsoever of the hundreds of Israeli children who died in that same terror war as a result of deliberate murder. Cynically, the editorial then goes on to state:

“In the last nine years, Cindy and Craig Corrie have been fighting for something that any parent who has lost their child has a right to – the truth.”

There is something deeply warped about the championing of “truth” by a newspaper which stubbornly refuses to accept the truth – even as proven in a court of law – about the accidental death of Rachel Corrie. Even more disturbing is the fact that the same newspaper is an active and willing partner in the habitual concealment of the truth about terrorist organisations responsible for the deaths of thousands of other children – both Israeli and Palestinian.

The distorted Guardian view of the Rachel Corrie case – as officially set out in this editorial – is indicative of the Guardian’s entire approach to Israel. Its whitewashing of terrorism and its supporters and its selective championing of ‘human rights’ (with no concern whatsoever expressed for those – Muslim, Christian or Jew – whose rights are compromised by its favourite pet terrorist organization) is not ‘Left’, ‘liberal’ or ‘progressive’, but discriminatory, reactionary and sinister.

This latest bout of binge publishing is all too reminiscent of the Guardian’s behavior during the Mavi Marmara incident when anyone and everyone was wheeled out to write speculative, uninformed – but uniformly condemnatory – comment in ridiculously large amounts before the facts of the case were anywhere near clear.

In that case too, the Guardian was subsequently unable to admit its mistakes because it had so heavily invested itself in one narrow preconceived version of “the truth”, with almost religious zeal. Then too, the Guardian went into obsessive-compulsive mode, focusing on the production of repetitive articles all bearing the shared hallmark of ritual condemnation of Israel. Then too, its blinding contempt for – and illogical animosity towards – the Jewish State was laid out for all to see.

And yet again, in that case as in this, the Guardian’s uncontrollable obsession once more exposed it as a voluntary arm of anti-Israel activism rather than a credible, sober reporter of news and events.