Here’s an altered quote by a journalist who works for a British newspaper.

“The blacks of today scare me and I find it almost impossible to talk to most of them. Any criticism of the policies of African countries  is regarded as racism. Most papers and journals will not even publish articles on the subject for fear of a black backlash. Whites are often treated with ill-concealed contempt, yet the blacks are always the victims. Am I prejudiced against blacks? Alas, yes.”

Outrageous, isn’t it? Morally indefensible, don’t you think? Such naked racism should get this journalist fired, wouldn’t you say?

The Jews of today scare me and I find it almost impossible to talk to most of them, including relatives. Any criticism of the policies of Israel – including the disgraceful treatment of Holocaust survivors as well as refugees from murderous regimes – is regarded as treason and/or anti-Semitism. Most papers and journals will not even publish articles on the subject for fear of a Jewish backlash. Goyim (gentiles ) are often treated with ill-concealed contempt, yet the Jews are always the victims. Am I prejudiced against Jews? Alas, yes.” 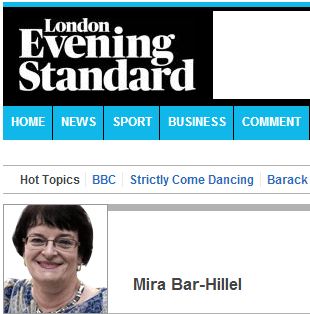 While writing posts at this blog on what we believe is antisemitism at the Guardian, our contributors often have to argue why particular narratives, tropes and passages should be interpreted as consistent with the EU Working Definition of antisemtism.

Reasonable people can, of course, disagree with our analysis of what constitutes antisemitism, and we take the task of making persuasive arguments about the nature of anti-Jewish racism – especially when it concerns morally gray areas – very seriously.

To those critics of ours who argue that they are indeed opposed to “real” antisemitism, but simply disagree with us on what constitutes such bigotry, the case of Mira Bar-Hillel presents a completely unambiguous example to test your assertion.

If you sincerely oppose antisemitism, and believe that racism should not be tolerated within the UK journalism profession, then you must acknowledge that a woman stating clearly, and without qualification, that she is, in fact, ‘prejudiced against Jews’ should not be employed by a British newspaper.

It is that simple.