An official Guardian editorial (Gaza: storm before the quiet, Nov. 21) on talks of a ceasefire between Israel and Hamas cited legitimate claims of victory both sides could make if a truce is signed.

[Netanyahu] can say that while Gilad Shalit is back with his family, the man who kidnapped him, Hamas’s military chief Ahmed al-Jaabari, is dead; he can say that the stock of missiles in Gaza is depleted and that the Iron Dome missile defence system proved itself. He can say the operation gave the lie to those who claimed Israel cannot act militarily now that the regional environment has been changed by the Arab spring.

Now, here’s the Guardian assessment of what Hamas will gain:

“Hamas has a different narrative. Whether a ceasefire takes effect or not, they will say their rockets established their reach over the majority of the population from Jerusalem to north of Tel Aviv. And far from being wiped out in the initial Israeli bombardment, they kept firing to the very end.”

Then, parroting Seumas Milne’s recent triumphant polemic about Hamas’ ‘victory’ in establishing themselves as the main Palestinian resistance movement, the editorial continues:

“At home, Hamas will have reaffirmed its role as the main resistance to the occupation – a role which it was in danger of surrendering to competitive militant groups in the Gaza Strip.” [emphasis added]

“More significant, Hamas claims, would be the political gains achieved during the past traumatic week – the pictures of the Egyptian prime minister and Turkish foreign minister clutching dead Gazan children, the stream of visits and support from the entire Arab League. What did the Palestinian president, Mahmoud Abbas, sitting all on his own in Ramallah get? Tony Blair.” [emphasis added]

It is worth noting that the Guardian is once again suggesting that Hamas, unlike the “craven” Palestinian leaders in Fatah, is more deserving of our moral sympathy, more justified in claiming the mantle of the authentic Palestinian resistance movement.

Further, the picture of the Egyptian prime minister clutching a dead Gazan child, which the Guardian is referring to, is an incident which was revealed to be a fraud. 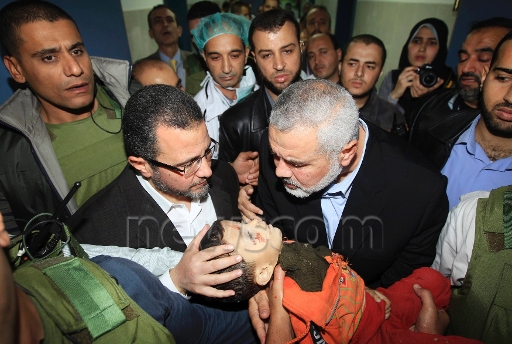 Though media reports initially claimed the child in question, 4-year-old Mahmoud Sadallah, was killed by an Israeli strike, it later was revealed that he was almost certainly killed by an errant Hamas rocket.

This cynical manipulation of a dead Palestinian boy to score public relation points should be a source of shame for Hamas, not a source of pride.

However, as long as the Guardian remains enamored of Hamas, and sympathetic to their claims of legitimacy, don’t expect even the most specious moral and political claims by the Islamist group to be subjected to critical scrutiny.