An article entitled “Sinai torture for Eritreans kidnapped by traffickers” by Mike Thomson appeared in both the Africa and Middle East sections of the BBC News website on March 6th 2013. An audio version of the same article was broadcast on the BBC World Service in the programme ‘Assignment’ on March 7th and can be heard here.

In the written version of the article, Thomson states:

“Hostage victims are often taken to the largely lawless, desert area of north Sinai, where their kidnappers can operate with near impunity.

In 2012, the UN’s High Commissioner for Refugees, Antonio Guterres, said that a “criminal network” of smugglers and traffickers was “taking profit of the desperate situation of many Eritreans”.

Egyptian security forces do operate in this region but only in limited numbers because of a long-standing peace agreement with neighbouring Israel.” [emphasis added]

In the audio version, at 16:52, Thomson informs listeners:

“What is clear though is that not enough is being done to combat the kidnap trade in Sinai. But I’m told this is at least partly because of a long-standing agreement with neighbouring Israel which limits the size of Egypt’s security forces in the region. And in one incident alone last year, sixteen Egyptian soldiers were shot dead by supposed Islamist militants there.” [emphasis added]

The agreement to which Thomson refers is of course the 1979 peace treaty between Egypt and Israel, although he does not make that fact clear. Under the terms of that treaty, the Sinai Peninsula was divided into zones with varying degrees of demilitarization. 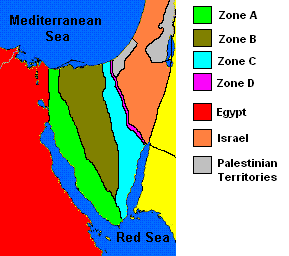 In Zone A, Egypt is permitted to hold a mechanized infantry division with a total of 22,000 troops. In Zone B, Egypt is permitted four border security battalions to support the civilian police in the area. In Zone C the Egyptian police and the Multinational Force and Observers operate and MFO camps and outposts are situated in this zone. In Zone D, Israel is allowed to keep four infantry battalions. Thus, as we see, the Egyptian army does have a presence in the majority of the peninsula and the Egyptian police is present in the entire area. The treaty also provides for changes in troop numbers through coordination with both parties.
It is left unclear in Thomson’s report who the person or persons are who “told” him that Egypt is unable to combat the kidnapping and human trafficking trade due to the restrictions in the peace treaty to which Egypt agreed, but it is clear that Thomson elected to include that misleading information in his reports without checking its accuracy.
Obviously, with the migrants from Eritrea entering Egypt several hundred miles south of the Sinai from the border with Sudan, the Egyptian authorities have the ability to prevent them from arriving in Sinai at all. An Eritrean migrant I interviewed last year told me how he made the journey:

“He told me that he left Eritrea on foot and crossed into Ethiopia, despite the fact that continuing tensions between the two countries mean that had he been caught by the Eritrean authorities trying to leave, he would have been liable for one to two years of imprisonment.

From Ethiopia, Ambesagir crossed into Sudan on foot. It was at that point that he abandoned the clothes and belongings he had brought with him, being unable to carry his luggage on the ten-day walk northwards. He and his group of 54 people then travelled by bus to the Nile, where they caught a boat which took them into Egypt. There the journey continued on foot, walking day and night without food or water. One member of the group died along the way. “

Thomson also fails to address the subject of Egypt’s long history of turning a blind eye to the various permutations of the smuggling activities (including weapons destined for Gaza and drugs destined for Israel) of the Sinai Bedouin over the years and the fact that until that August 2012 terror attack in which 16 Egyptian soldiers were killed, it consistently kept troop levels in Sinai lower than those permitted under the terms of the 1979 peace agreement. He also ignores the fact that when it has considered it to be in its interest to do so, Egypt has deployed troops in Sinai in excess of the agreed numbers without prior consultation as required under the terms of the peace treaty.

“More than a year ago, Israel agreed to allow Egypt to maintain seven military battalions and six companies in Sinai, including tank units, in addition to the forces permitted by the peace treaty itself. Before the August 5 terrorist attack, Egypt had not stationed the full complement of troops in Sinai that it was permitted. “

In a January 2012 report on the Sinai published by the Washington Institute for Near East Policy Ehud Ya’ari explained (p 13):

“According to the signed Military Protocol between Egypt and Israel, the army is permitted to keep 22,000 soldiers in the Sinai, limited to Zone A, the westernmost portion of the peninsula. But during most periods, the Egyptian army has stationed only 70–80 percent of that number in the area. The military has never established a separate command headquarters for the Sinai forces. Each of the rotating four brigades remains under direct control of its divisional operations room west of the Suez. At all times, each brigade belongs to a different first-echelon division of either the Third or second Army. And during the revolution, some of these forces were withdrawn to the mainland and have yet to return. Moreover, when Israel consented to allowing Egyptian troops into Zones B and C in central and eastern Sinai, Cairo deployed the limited battalions already stationed in the peninsula instead of bringing in reinforcements from the mainland. Israel also agreed to allow twenty Egyptian tanks into Zones B and C, but Cairo abstained from sending them.

This attitude reflects the military’s limited interest in the Sinai, despite constant domestic criticism of treaty restrictions on Egypt’s ability to exercise sovereignty over the entire peninsula. Since the army was not prepared to oversee the Sinai, it had no incentive to commit even the number of units allowed by the Military Protocol. The army, in short, perceived its role to be purely defensive, occupying itself with routine training for crossing the Suez while keeping as much distance as possible from Bedouin affairs.” […]

“Regarding Bedouin smuggling activity into Israel, the general thrust of Cairo’s policy was—and remains—not to interfere. Even when caught, Bedouin drug smugglers headed for Israel have received much lighter sentences than those carrying drugs into Egypt.

Rather than blindly repeating the inaccurate information he was “told” by an either uninformed or interested party, Thomson should have checked the accuracy of that claim before including it in his report. His obvious failure to do so means that his assertion that the failure to deal with the kidnapping and torture of African migrants in Sinai is related to the terms of the Egypt-Israel peace treaty becomes nothing more than a gratuitous and misleading inaccuracy which prevents audiences from understanding the real factors at play.