“A Palestinian shot in the head by Israeli soldiers during a confrontation with stone-throwers has died of his wounds, hospital officials say.

Mohammed Asfour, 22 was hit by a rubber bullet during the protest in the West Bank village of Aboud on 22 February.

He had been protesting against the continued detention of four hunger strikers after the death of a detainee.

Asfour (a member of Hamas according to that organisation) was indeed injured on Friday February 22nd 2013 during a violent riot near Aboud – north-west of Ramallah – which developed out of a protest in support of Palestinian prisoners. However – in contrast to the statement made in the above article by the BBC – that protest did not come after “the death of a detainee” because Arafat Jaradat did not die until the next day – Saturday, February 23rd.
Hence, the BBC’s claim that Asfour “had been protesting […] after the death of a detainee” is inaccurate and the article’s following line – “Israel says Arafat Jaradat, 30, apparently died from a heart attack. Palestinians say he was tortured” – is irrelevant to the report and gratuitous – as well as inaccurate in that it does not reflect the findings of Jaradat’s post-mortem.
This article also provides another opportunity to compare the BBC’s style of reporting violence in Israel and Palestinian-controlled areas with its reporting of similar incidents on its domestic front.
As we see, the BBC’s choice of language in this article plays down the violent aspects of the incident. [all emphasis added] 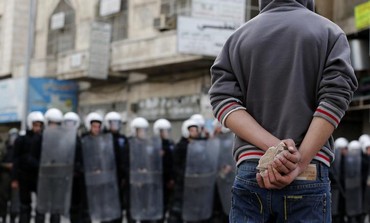 “during a confrontation with stone-throwers….”

“He had been protesting….”

In other words, when Palestinians throw stones at Israeli security forces, these are “protests” which result in “confrontation”.
However, as we see from this recent BBC report from Northern Ireland, when people throw bricks and bottles at the police in Britain, they become rioters engaged in violence. [all emphasis added]

“Loyalist rioting in Glengormley in which five police officers were injured was “totally unacceptable”, the Northern Ireland Secretary has said.”

“Theresa Villiers was speaking about violence at Carnmoney Road on Friday when up to 100 people attacked police.”

“Police have said “a very small minority intent on causing disruption and harm” were behind Friday night’s violence..”

“In a statement on Saturday, the Police Service of Northern Ireland (PSNI) said an investigation into the violence was under way.”

In fact, the word “violence” is used seven times throughout this article, leaving readers with a very clear picture of events whereas – in line with usual BBC practice when reporting Palestinian rioting – in the article about Mohammed Asfour, the words “violence” or “rioting” are not used at all.
Obviously the reason for this discrepancy of language used to report similar incidents needs to be addressed by the BBC. Otherwise, its reputation for impartiality will remain compromised.
Related articles:
What the BBC classified as ‘riots’ in London become ‘protests’ in Beitounya
Where can terrorism be named as such by the BBC?