Among the BBC’s ample coverage of the alleged Israeli air-strikes on targets in Syria related to the transfer of advanced weapons to the terrorist organisation Hizballah, we find a ‘Question & Answer’ article dated May 5th 2013. 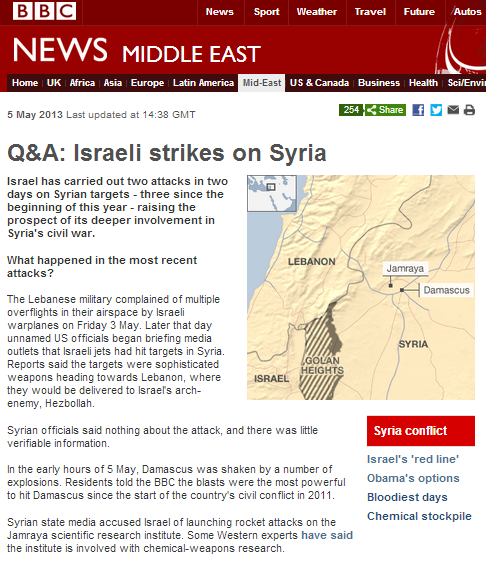 “Israel has carried out two attacks in two days on Syrian targets – three since the beginning of this year – raising the prospect of its deeper involvement in Syria’s civil war.”

The suggestion that Israel is already involved in the civil war in Syria – and may become more so – is inaccurate and misleading. Any Israeli actions are not intended to benefit either one side or the other in the conflict, but solely to reduce dangers to Israeli civilians. Should Syria or Hizballah choose to retaliate, that would signal the opening of another round in existing, separate conflicts.

“The Lebanese military complained of multiple overflights in their airspace by Israeli warplanes on Friday 3 May. Later that day unnamed US officials began briefing media outlets that Israeli jets had hit targets in Syria. Reports said the targets were sophisticated weapons heading towards Lebanon, where they would be delivered to Israel’s arch-enemy, Hezbollah.”

“Arch-enemy”? That reads more like the script for a Bond film than measured, professional analysis.

“In the early hours of 5 May, Damascus was shaken by a number of explosions. Residents told the BBC the blasts were the most powerful to hit Damascus since the start of the country’s civil conflict in 2011.

However, unnamed Western and Israeli security officials briefed later that the target was not Jamraya. It was once again weapons caches heading to Hezbollah, which may have been stored near the research facility.”

A very significant and glaring fault in an article purportedly intended to provide BBC audiences with background information and context to the specific events, is its failure to put sufficient accent upon the Iranian factor – either in the context of Hizballah as an Iranian proxy, Iran as the supplier of weapons or the Iranian presence on the soil of its Syrian ally.

“The New York Times said on Saturday that Iranian surface-to-surface Fateh-10 missiles were struck at a Damascus airport warehouse that was under the guard of the Iranian Quds Force and Hezbollah. The projectiles have a range of 300 kilometers.”

But only in the thirteenth paragraph of this BBC article do its readers learn of any kind of Iranian involvement in the story from this brief docile portrayal:

“After the 5 May attack unnamed Israeli officials confirmed the assault and said the target was a shipment of Fateh-110 missiles, which were being transported from Iran to Lebanon via Syria.”

Under the sub-heading “Why would Israel attack?”, readers are told the following: [emphasis added]

“Taken at face value, the statements from unnamed officials suggest Israel’s actions are defensive. It fought a war with Hezbollah in 2006, and regards the Lebanese militant group as its key regional enemy. On this analysis, cutting the supply line to Hezbollah is crucial to stop a potential conflict.”

“At face value”? Whilst it does not specifically present any other theory, the BBC seems to be suggesting here that there are in fact other motives for Israel’s actions besides the defence of its citizens. That notion was also promoted in a Tweet from Wyre Davies on May 6th.

Four paragraphs on, the article once again promotes the erroneous notion of Israeli involvement in the Syrian civil war – obviously sourced from Syrian regime propaganda.

“Also, Israel risks becoming a major factor in Syria’s civil war. The Assad regime has already portrayed anti-government rebels and Israel as working “hand in glove”. And the strikes have brought a chorus of disapproval from the wider region, further shoring up Mr Assad’s position.”

Interestingly, the BBC does not typically classify hands-on practical support and training provided to the rebel faction by countries such as the United States, the UK and France as ‘intervention’ in Syria’s civil war or deem them ‘major factors’ in that conflict. Neither does it parrot Syrian regime propaganda on that subject.

“Israel also has its own dispute with Syria over the Golan Heights. Although the border has been relatively peaceful, concern is growing that increasing chaos in Syria could spill over.”

The BBC’s definition of “relatively peaceful” apparently includes numerous incidents of cross-border shelling and shooting which, although consistently under-reported by the BBC, have long passed the theoretical threshold of “could spill over”.

Citing no named legal sources for its assertion, the article goes on to say:

“The risks of carrying out strikes are huge. The attacks, if proved, would be likely to breach international law and could lead to retaliation.”

This gratuitous reference to “international law” is clearly intended more for politically motivated dramatic effect than to inform readers of any relevant factual legal background. Interestingly, the legal aspect of the transfer of long-range surface to surface missiles to the terrorist militia Hizballah in direct contravention of UN Security Council resolution 1701 does not appear to interest this BBC writer.

Significantly, the understanding of and support for the alleged air strikes from the US and the UK goes unmentioned both in this article and other BBC coverage of the subject.

The article continues with a wonderful display of BBC equivalence:

“This year’s strikes are the first inside Syria since September 2007, when Israeli warplanes were suspected of destroying a site that UN monitors said was likely to have been a nuclear reactor. Syria denied the claim, saying the building was a non-nuclear military site.” [emphasis added]

The BBC’s polemical promotion of its ‘world view’ – disingenuously disguised as supposedly factual background material – is cringingly transparent in this article. Not only doing little to meet the BBC’s obligation to contribute to audience understanding of the real context of recent events in the region, it actually hampers any such understanding by advancing the conspiracy theories of the Syrian dictatorship and glossing over vital components of the picture such as Iranian involvement.

The BBC does not yet appear to grasp that its overall reputation as a supplier of accurate and impartial information is severely damaged by such shoddy journalism on the subject of the Middle East.