Sharp-eyed readers will have noticed that Harriet Sherwood’s romanticised piece entitled “Gaza gastronomy” – which appeared under the ‘Food & Drink’ heading of the Guardian’s ‘Life & Style’ section  on May 14th 2013 – revolves around unveiled promotion of a book co-written by former Guardian contributor Laila el Haddad. 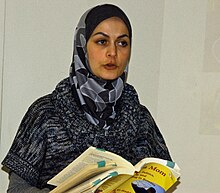 El Haddad – known on Twitter as ‘gazamom‘ despite the fact that she was born in Kuwait, grew up in Saudi Arabia and lives in the United States – was also a polemicist for Ali Abunimah’s ‘Electronic Intifada‘ where she told tall tales of a “Gaza genocide” and “Gaza facing humanitarian crisis” for years on end. Her Guardian articles were no less over-dramatic as she informed readers that “Calling Gaza a prison camp is an understatement“. El Haddad obviously missed the irony of a person whose Guardian profile describes her as someone “who divides her time between Gaza and the United States” claiming lack of freedom of movement.

It comes as no surprise to learn that el Haddad’s new book (like its predecessor) is published by the firm established by former Human Rights Watch MENA advisory board member and prominent Quaker Helena Cobban.  Neither is there anything strange about the fact that el Haddad is a policy advisor for the pro-BDS, pro-‘one-state’ Al Shabaka.

Sherwood of course omits from her article any mention of the political views underlying and seasoning Laila el Haddad’s cookbook or her promotion of it at ‘Israel Apartheid Week‘ events and even during last November’s conflict between Hamas and Israel.

But el Haddad’s views are an important part of this particular attempt at ‘soft’ campaigning being promoted and enabled by Sherwood. In a Guardian article from 2009 she stated quite clearly “I am a proponent of a one-state solution”. That ‘solution’, though often garnished with the language of ‘human rights’ and ‘equality’, has one aim: the dissolution of Israel and the denial of the Jewish right to self-determination.

Would the Guardian consider it appropriate to promote a cookbook authored by a proponent of the reversal of rights for women or gays? Of course it would not. But it does choose to deliberately ignore the basic ingredients of Laila el Haddad’s discriminatory recipe.

Like Loading...
Tags from the story
Gaza, Guardian, Harriet Sherwood, Laila El-Haddad, Uncategorized
Written By
Hadar Sela
More from Hadar Sela
Despite the constraints of its famously “smaller operation at the weekend when...
Read More