When was “recently” and how much are “small amounts”?

These two questions arise from Yolande Knell’s August 3rd article entitled “Damaging knock-on effects of Morsi’s downfall for Hamas” which appeared in the Features & Analysis section of the Middle East page on the BBC News website.

In that report, Knell finally gets round to telling BBC audiences about Egypt’s closure of smuggling tunnels running under its border with the Gaza Strip and the border itself.

“In recent weeks Egypt’s military has largely closed the Rafah border crossing with the Gaza Strip, restricting the movements of Palestinian travellers.

At the same time it has stepped up its campaign against Islamist militants in the restive Sinai region using bulldozers and dynamite to demolish smuggling tunnels along the Gaza border.

The underground passages mainly operate to transfer cheap fuel and commercial goods into the Palestinian territory from Egypt but they are also used by fighters and to move weapons.”

In this particular Gaza-related BBC article there are however no quotations of outraged condemnations of Egypt’s actions by assorted ‘human rights groups’ – because there are none to quote. But nevertheless, Knell is unable to leave Israel out of this story about Egypt and the Gaza Strip. Having described the effects of the tunnel closures on the population of the Gaza Strip, she adds:

“While Israel has eased restrictions on the Gaza Strip, which were tightened after Hamas came to power in 2007, it is still cheaper to bring some consumer goods from Egypt, particularly petrol, which is subsidised, and some kinds of food.”

There is nothing new in Knell’s failure to properly inform BBC audiences about the reasons for those post-June-2007 “restrictions” – in fact she makes quite a habit of it. As we have had to point out here before in relation to reports by Knell:

Three months later – on September 19th 2007 – in light of the escalation of terrorist rocket attacks against Israeli civilians originating in the now Hamas-controlled Gaza Strip – the Israeli government declared Gaza to be ‘hostile territory’.”

“Israel has only recently allowed small amounts of construction materials to be sent to Gaza for use by the private sector. Many 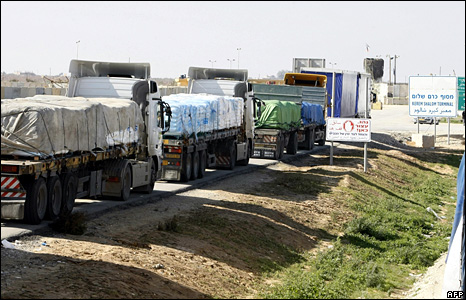 Palestinian firms have continued to rely on Egyptian suppliers.”

And here arise the questions when was “recently” and how much are “small amounts”? The term “private sector” is used to describe organisations not owned and operated by governments. It includes privately owned corporations (profit or non-profit), businesses and charities.

Between 2010 and 2012, 23,525 truck-loads of construction materials entered the Gaza Strip from Israel for use in projects approved by the Palestinian Authority and carried out by international bodies. Some of those projects were undertaken by foreign governments such as Germany, the United States or Japan, whilst others were carried out by private sector bodies such as the Red Crescent, the ICRC, or charities.

But perhaps Knell actually means local Gazan contractors when she refers to the private sector? On that front we can see that for example that in May 2010:

In November 2011 a plan to import construction materials to the private sector in the Gaza Strip was implemented by COGAT. That plan included one very important aspect completely ignored by Knell.

“It has been agreed that building materials for the renovation and rehabilitation of 10 private sector factories will be imported, under a supervision and control mechanism designed by the international community in order to ensure that the raw materials reach their intended destinations and do not fall in to the hands of terrorist organizations.” [emphasis added]

In order to find out more details, BBC Watch contacted COGAT and learned that since ‘Operation Pillar of Cloud’ nine months ago, up to twenty trucks of aggregates destined for the private construction sector have been entering the Gaza Strip every working day.

So Knell’s “recently” in fact goes back several years and “small amounts” are several thousand tons, but – more importantly – she misleads by omission when she fails to inform BBC audiences why the import of certain types (rather than amounts) of construction materials classed as dual-use (i.e. items that have military as well as civilian applications) has had to be regulated.

Both of these omissions by Knell have the end result of denying BBC audiences important context which would contribute to their understanding of Israeli actions. That, coupled with the fact that the BBC insists upon euphemistically describing Hamas as a “militant group”, means that the BBC is failing once again in its mission to “build a global understanding of international issues”.