How many times over the last week have readers of the BBC News website been told that Israeli building tenders in Jerusalem and Judea & Samaria threaten to “sabotage” peace talks?

August 12th saw the appearance of an article titled “Israel names 26 Palestinian prisoners for release“ in which the same meme was also promoted, as well as an item by Jonathan Marcus entitled “Does Middle-East peace process matter?“ in which he misleadingly suggests that a construction freeze was part of the “understanding” reached in order to resume the latest round of talks. That article has been featured on the website for eight days – and counting.

On August 13th the BBC published an article called “Kerry: Israeli settlements move was expected“ which also promoted the notion that Israeli building would “sabotage” the talks. The same day also saw the appearance of a report by Kevin Connolly titled “Little hope for talks among Israelis and Palestinians“ in which the same meme was advanced. That report stayed on the website for three days in all. Another article titled “Palestinian prisoners ‘moved’ before Israel release“ devoted over half its word count to the subject of Israeli building.

August 14th saw the appearance of three reports – one written (“Israel releases 26 Palestinian prisoners ahead of talks“) and two filmed – both titled “Israel frees Palestinian prisoners“, both by Yolande Knell (see here and here) and both of which also appeared on BBC television news as well as on the website again the following day.  All of those reports purported to report on the release of Palestinian prisoners, but all of them also promoted the ‘building sabotages peace talks’ meme. Also on the same day an article by BBC Monitoring entitled Q&A: Israeli-Palestinian talks in Jerusalem was published in which the subject of building tenders was reported to have caused “dismay” to Palestinians.

On August 15th (and for three additional days afterwards) the BBC News website carried a report titled Israel-Palestinian peace talks resume in Jerusalem  which promotes the claim that: 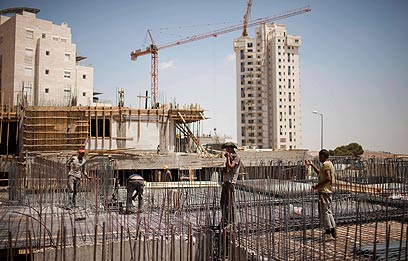 “Jewish settlements in the occupied West Bank and East Jerusalem have continued to overshadow the resumption.

The issue halted the last direct talks in September 2010 and Palestinian representatives have accused Israel of trying to sabotage the latest negotiations.

In recent days Israel has announced plans for more than 2,000 new settlement homes.

“The talks might collapse any time because of the Israeli practices,” he told Voice of Palestine radio.”

As we see, a regular reader of the BBC News website would have been exposed to the meme that Israel announced the issuing of building tenders on August 11th as a means of “sabotaging” the renewed talks – and hence a threat to peace in general – in no fewer than thirteen reports published on the website in the period August 11th to August 15th inclusive. Naturally, the promotion of that meme was often accompanied by now standard misleading BBC slogans such as:

“Israeli settlements in the West Bank and East Jerusalem are considered illegal under international law, although Israel disputes this.”

“The issue of settlement-building halted the last direct talks.

These collapsed in September 2010.”

During the same week, Israel released twenty-six convicted terrorists and murderers as a ‘goodwill gesture’ aimed at encouraging the Palestinians to return to the negotiating table. As was widely documented by the BBC itself, those prisoners were received at official Palestinian Authority organized celebrations in which the man holding the highest office in the PA – Mahmoud Abbas – literally and figuratively embraced the men as heroes, glamourising and glorifying their acts of terrorism.

The BBC, however, does not appear to consider the Palestinian Authority’s public glorification of terror just hours before renewed talks were set to commence as an attempt to “sabotage” those talks or a threat to ‘Middle East peace’ and so the number of articles exploring that angle which visitors to the BBC News website would have read in the same period of August 11th to 15th is zero.

Were the BBC’s coverage of these renewed talks truly accurate and impartial it would not refrain from informing its audiences of the fact that, even whilst sitting at the negotiating table, the Palestinian Authority continues to incite its people against Israel, to glorify terror and to spend 6% of its budget on salaries for convicted terrorists. As it is, BBC audiences have so far read no analysis on the subject of how those factors might influence the talks, but they have been spoon-fed a meme on Israeli building which bears uncanny resemblance to the campaign currently being run by the PLO.