What the BBC headlined as a “clash” on September 20th has three days later become a “scuffle”. 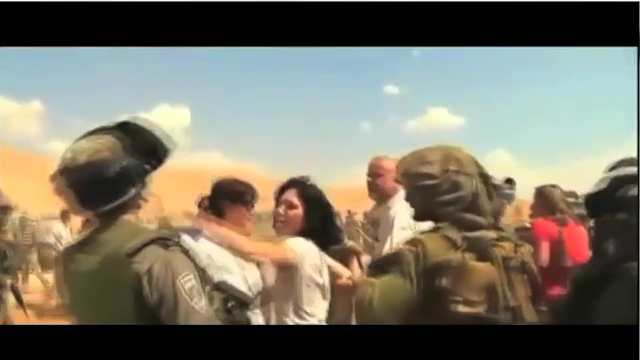 occurred on the same day near Hemdat in Area C in Samaria was not subsequently updated to reflect the fact that claims made French diplomat Marion Fesneau-Castaing – which were amplified by the BBC in its report – were brought into question by video footage of the incident itself, including filmed evidence of her striking a member of the Israeli security forces in the face.

On September 23rd the Middle East page of the BBC News website carried an additional item titled “Israel ‘to act’ over West Bank diplomats scuffle” in which readers were informed – albeit in rather ambiguous language – of Ms Fesneau-Castaing’s actions. 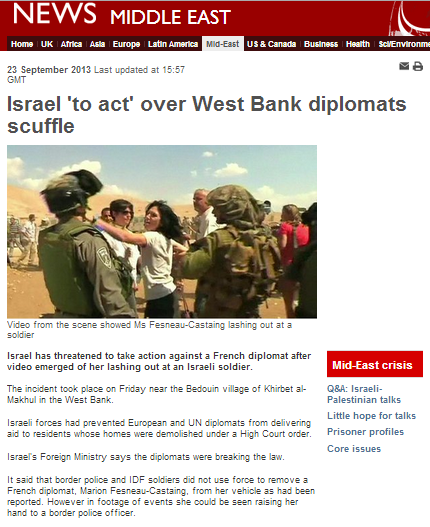 The article states: [all emphasis added]

“Israel has threatened to take action against a French diplomat after video emerged of her lashing out at an Israeli soldier. […]

Israel’s Foreign Ministry says the diplomats were breaking the law.

It said that border police and IDF soldiers did not use force to remove a French diplomat, Marion Fesneau-Castaing, from her vehicle as had been reported. However in footage of events she could be seen raising her hand to a border police officer.”

The caption to the accompanying illustration originally stated:

That caption was later changed when the photograph was replaced with video and now reads:

“Video from the scene showed Ms Fesneau-Castaing in incidents with Israeli border police.”

The idiom ‘raise a hand’ can be used together with the word ‘to’ or together with the word ‘against’ and may indicate either actual physical violence or a threat of violence. As is clearly shown in the video, in this case the use of less ambiguous language would have been appropriate – particularly on a website read by many visitors for whom English idioms may be something of a mystery.

The phrase ‘lashing out’ can be used to represent either a verbal or physical attack. Again, the ambiguity created by the BBC’s choice of language does not contribute to clear audience understanding of the event. The use of such ambiguous phrasing is even more interesting in light of the fact that the opening paragraph of the original version of the report stated that:

“Israel has threatened to take action against a French diplomat after video emerged of her pushing or hitting an Israeli soldier.” [emphasis added]

Whilst the publication of this additional article on the subject is a welcome step towards greater accuracy in the BBC’s reporting of the incident, it should of course be added as a link in the original article from September 20th in order for readers of that item to have a more balanced view of events. At present no such link exists.