There is little debate that the continuing international phenomenon of child marriages represents a serious human rights violation.

Indeed, it is estimated that more than 142 million girls will be coerced into becoming child brides by 2020 if current rates continue. Of that number, 50 million will be younger than 15.  Child marriage “increases health risks through early pregnancy and motherhood”, and increases the chances of girls being the victims of physical and sexual abuse in the home.  In poor countries, complications from pregnancy and childbirth are the leading causes of death for teenage girls.

According to Babatunde Osotimehin, M.D, Executive Director, United Nations Population Fund, “Child marriage is an appalling violation of human rights and robs girls of their education, health and long-term prospects,”

In Gaza, the problem is especially serious. A recent Al Monitor report claimed that of about 17,000 marriages registered in the courts of Gaza, a staggering 35% of the brides were under 17 years old. The author of the story cites, as the cause of this widespread problem, “old traditions that do not allow girls the right to decide their fate, and a lack of legal and legislative action to grant them this right.”

Yet, it is hard to escape the conclusion that the photographer and Guardian editor responsible for the following Sept. 30 photo story on a recent child marriage in Gaza was almost romanticizing such underage marriages. 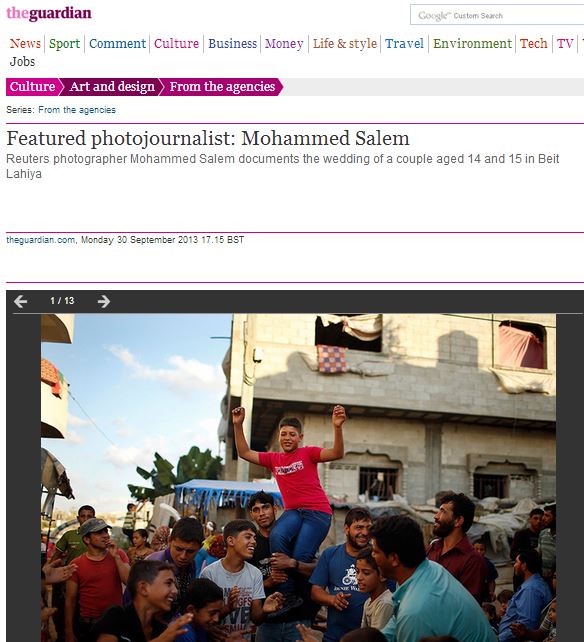 Here’s the caption of the photo:

Ahmed Soboh, 15, is welcomed by his relatives a day before his wedding party, in Beit Lahiya, near the border between Israel and the northern Gaza Strip

In fact, the captions used under the 13 pictures in the series (some of which were featured previously at the Guardian in their ‘Picture Desk Live’ series) don’t even attempt to contextualize the recent marriage of Ahmed, 15, and Tala, who’s only 14, in a manner which would convey the message that such a young union is widely acknowledged to be a grave violation of children’s human rights.

Here’s another photo from the series:

The caption reads: “Ahmed Soboh, 15, and his bride Tala, 14, stand inside Tala’s house during their wedding party in Beit Lahiya.”

Finally, the horror of child marriages was recently articulated by an 11-year-old Yemeni girl, Nada al-Ahdal, whose account of escaping her own arranged marriage went viral on YouTube.

It’s difficult to avoid detecting a whiff of liberal racism in the Guardian’s photographic celebration of the young girl’s exploitation – a misplaced fear, perhaps, of offending cultural sensitivities by holding poor Palestinians accountable to Western standards – and, just as likely, an inability to frame stories of injustice in ‘Palestine’ which don’t fit the template of Israeli oppression.