On October 20th we noted here that the BBC has failed to report on the intimidation of potential candidates and voters in the upcoming Jerusalem municipal elections by Palestinian political groups.

On October 21st a feature on the subject of the Jerusalem municipal elections titled “Jerusalem: Communities up-close” by Erica Chernofsky appeared on the BBC News website’s homepage and on its Middle East page. 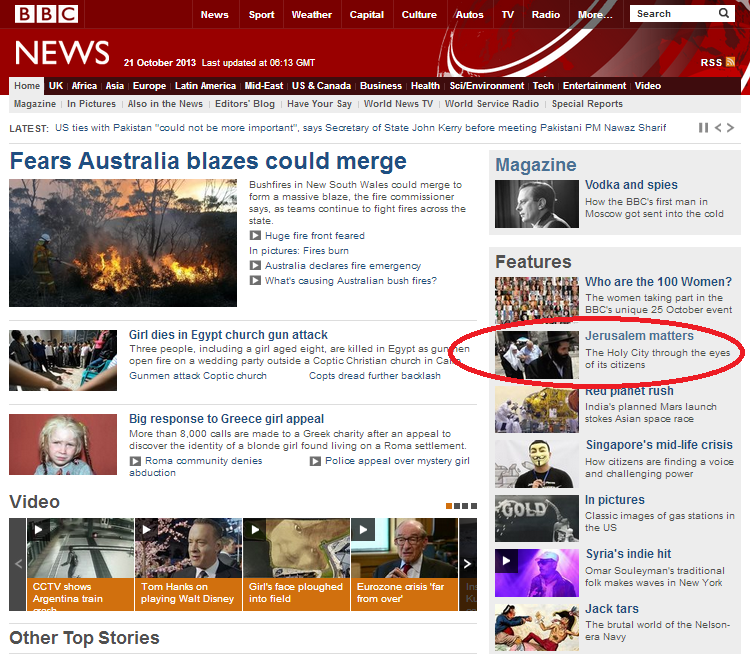 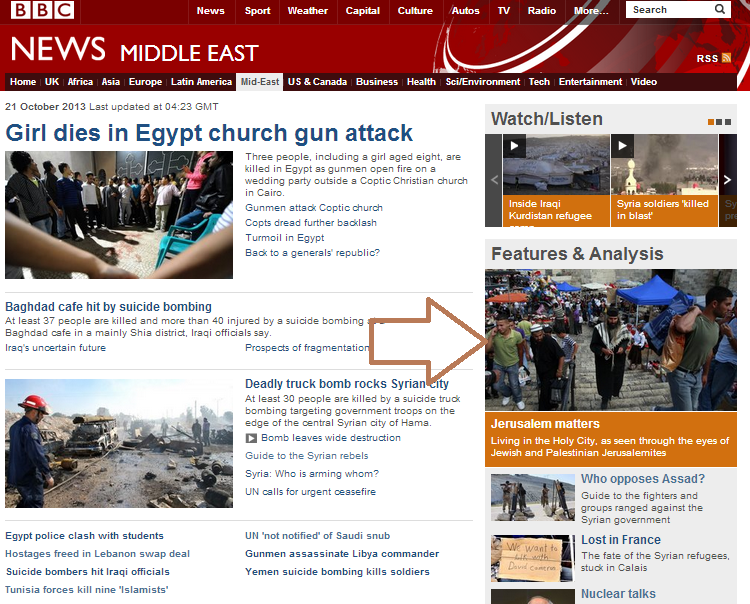 “Jerusalemites are preparing to cast their vote – or abstain in protest – in municipal elections. The city is home to the world’s major religions and a host of social, political and economic issues. Here, the BBC’s Erica Chernofsky looks at some of Jerusalem’s diverse communities and the matters which concern them.”

Moving quickly on from Chernofsky’s poetic descriptions of the city, the article gives an early presentation of the standard BBC mantras:

“Despite its charm, Jerusalem is also a source of bitter disputes. It is a divided city, part Arab, part Jewish, and its ownership is still fought over, as ever.

Both Israel and the Palestinians claim it as the capital of their nations. Israel captured East Jerusalem in the 1967 war and later annexed it, but the international community does not recognise this sovereignty.”

As ever, the BBC presents history as beginning in June 1967, with no proper background provided either about the 19-year Jordanian occupation of Jerusalem which divided the city for the first and last time in its history, the expulsion of Jews from neighbourhoods now described as “Arab”, or the background to the Six Day War itself.

Equally predictable is the BBC’s failure to inform audiences that the original PLO Charter of 1964 specifically renounced any territorial claims to areas occupied by Jordan, or that the issue of Jerusalem as the capital of a future Palestinian state only surfaced in November 1988 in the PLO’s unilateral Declaration of Independence, or that the Palestinian Authority’s ratification of the law it passed declaring Jerusalem as its capital only took place as recently as October 2002. Likewise, the BBC neglects to inform its audiences of the existence of legal opinions contradicting those held by a supposedly homogeneous “international community”.

In the section of the article supposedly representing the views of the Arab population of Jerusalem, Chernofsky writes:

“There is another sector of Jerusalem society battling to have its voice heard, but most of its population won’t even be voting.

The Palestinians of East Jerusalem are not Israeli citizens and therefore cannot vote in national elections.”

This misleading claim clearly contravenes BBC editorial guidelines on accuracy by concealing both the fact that Arab Jerusalemites have the right to apply for Israeli citizenship if they wish to do so and that increasing numbers of them have already exercised that right.

“But they are officially residents of the city, and as such have the right to vote in local elections.

However, most of them will be boycotting the polls out of protest against the Israeli occupation and what they say is discrimination against their community by local government.”

No mention is made of the long-standing campaign of intimidation of potential candidates and voters by the PLO, Hamas and other Palestinian political organisations.

He used to be a microbiologist, but took over his family’s business after his father died.

He complains that living conditions are much worse on the eastern side of the city than on the western, mostly Jewish, side, and longs for a day when the Palestinians will be able to govern themselves in a state of their own.”

Chernofsky’s presentation of the views of her interviewee as representative of those of Jerusalem’s Arab population is of course highly misleading and conceals the fact that according to a 2011 poll, that population holds a variety of opinions which are by no means as uniform as the BBC suggests.

“According to face-to-face surveys conducted according to the highest international standards, more Palestinians in east Jerusalem would prefer to become citizens of Israel rather than citizens of a new Palestinian state. In addition, 40 percent said they would probably or definitely move in order to live under Israeli rather than Palestinian rule.

44 percent of the Palestinians in Jerusalem say they are very, or at least somewhat, satisfied with their standard of living. This is a very high percentage compared to other populations in the Arab world. Only about 30 percent sympathize with either Fatah or Hamas or with the Israeli Arab Islamic movement. Politics is not a major preoccupation.

The omission of any mention of interference in the democratic process by foreign organisations through harassment and intimidation of sections of the Jerusalem electorate, along with the failure to make any mention of the broad range of opinions to be found among Jerusalem’s Arab population, amply indicates that this shallow and stereotypical BBC article is prompted by political motivations rather than journalistic ones, thus clearly breaching BBC editorial guidelines on both impartiality and accuracy.