A headline appearing on the Middle East page of the BBC News website on November 30th informed readers that “Bedouins hold Israel ‘day of rage'”, with the sub-header reading:

“Bedouin Arabs living in Israel have been protesting in the Negev Desert and towns and cities over government plans to resettle them.” 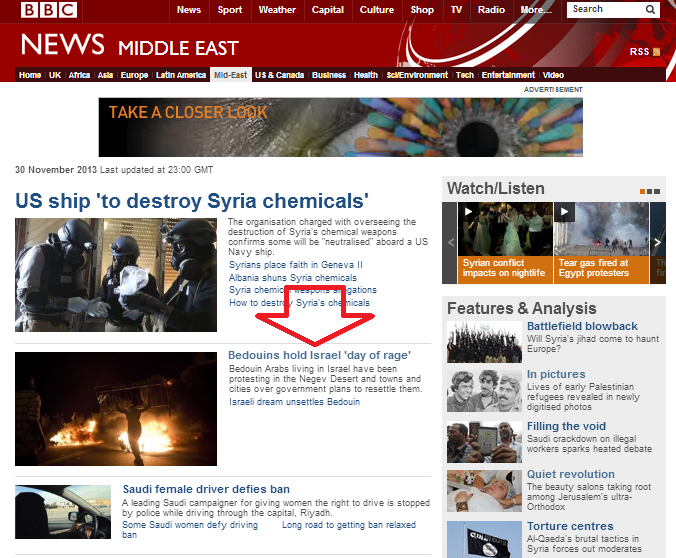 Below that headline (and also at the bottom of the article itself) appeared a link to a ‘related story’ produced in January 2013 by Newsnight’s Tim Whewell which was discussed here.

The link in the headline leads to an article titled “Israel: Negev Bedouins’ ‘day of rage’ over resettlement plan“. 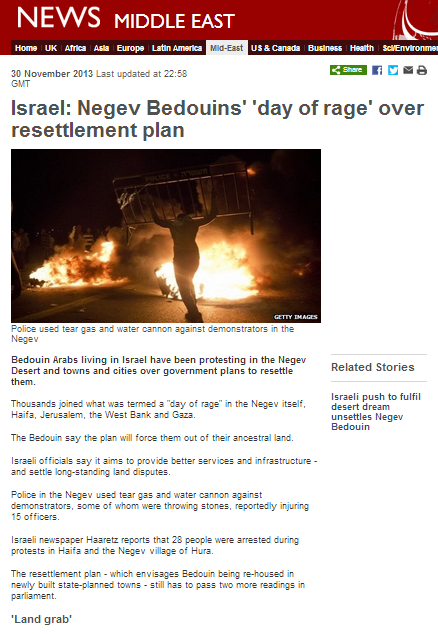 “Bedouin Arabs living in Israel have been protesting in the Negev Desert and towns and cities over government plans to resettle them.”

So, in two headlines, a sub-header and an introductory sentence, readers have already been informed four times before they begin to read the article itself that the participants in (and by implication, the organisers of) the protests which took place on November 30th were Bedouin.

There is no doubt that some Bedouin were present at some of those demonstrations. However, at no point does the BBC’s report inform readers of the broader background to those protests, which are part of a much wider delegitimisation campaign – initiated, led and coordinated by non-Bedouin actors – which has been going on for some time.

Details of that coordinated campaign have been published by NGO Monitor in a report titled NGOS AND THE NEGEV BEDOUIN ISSUE IN THE CONTEXT OF POLITICAL WARFARE. Further information on the propaganda surrounding the issue can be read in this article by Ben Dror Yemini.

The distinctly jaded term ‘Days of Rage’ has been used to conscript supporters to similar protests on several occasions in the past. Among those making up the conglomerate of anti-Israel activists promoting these regular demonstrations are the International Solidarity Movement (which is linked of course to the same people who organized the failed flotilla publicity stunts), the Boycott, Divestment and Sanctions movement (BDS), the ‘Stop the Wall’ organization (which was also involved in the ‘Global March to Jerusalem’ publicity stunt), the Communist Party of Israel and the Higher Arab Monitoring Committee (the leader of which also took part in the organization of the ‘Global March to Jerusalem’ and in the 2010 flotilla). As can be seen in the logo appearing on this campaign poster promoted on the blog of veteran anti-Israel campaigner Abir Kopty, advertising material for the campaign has been produced by non-Bedouin organisations such as the Haifa-based Baladna.

Promotion of the November 30th ‘Day of Rage’ events outside Israel has also been carried out by known anti-Israel campaigners such as Yael Kahn (no stranger to the BBC), Ben White writing on the Hamas-linked MEMO site and of course the flotilla-participating, Hamas-supporting Palestine Solidarity Campaign.

Hence, the BBC’s portrayal of these demonstrations as spontaneous protests initiated by Bedouin living in the Negev is – at best – a very partial representation of the facts. However, it can also be viewed as aiding and abetting a political campaign which now exploits the Bedouin issue for a much wider and older agenda of delegitimisation and that perception is reinforced by the fact that the BBC article links to an organised campaigning letter signed (at the click of a mouse on the PSC website) by a collection of known anti-Israel campaigners and former ‘celebs’ and published – naturally – in the Guardian.

Beyond a few token sentences clearly designed to ‘tick the impartial box’, the BBC report makes no effort to inform readers of the actual substance of the proposed Prawer-Begin Plan. Neither does it make it clear that the majority of Negev Bedouin have already taken advantage of the incentives on offer to them and now live in planned communities where all the facilities and services can be provided. In fact, readers of this BBC article would take away the exact opposite impression.

“Before the creation of the state of Israel in 1948, groups of Bedouin Arabs lived a semi-nomadic life in the Negev but in modern times many have settled in what are known as “unrecognised villages”.

Because they have no formal planning status, they have no access to government services including supplies of electricity and running water. Some are no more than collections of flimsy shacks made from corrugated iron.”

Here is what one Bedouin has to say about the Israeli government’s plan to improve the living conditions and economic status of the Negev Bedouin:

“However, the Bedouin and their supporters see the resettlement move as a smokescreen for a programme to cut the historic links between the Arab communities and their land, and to replace them with new Jewish settlements.”

The BBC News website editors would do well to heed their own Key Terms guide on the use of the word “Jewish” in this case.

Be careful over whether you mean ‘Israeli’ or ‘Jewish’: the latter might imply that the story is about race or religion, rather than the actions of the state or its citizens.”

As it stands, the implication in the BBC report is that only Jews will be able to live in any “Jewish settlements” to be constructed in the Negev – an assertion which is patently untrue as Ben Dror Yemini notes.

“Any Bedouin who wishes to buy land there is invited to do so and is entitled to do so. Of course, that would cost money. In Meitar, for example, Bedouins from the surrounding area decided to buy plots of land. No one stopped them.”

Not only does this BBC article fail to meet basic editorial demands of accuracy and impartiality; it also seriously damages the BBC’s standing and reputation by displaying the extent of its self-conscription to the ranks of an organized political campaign which goes far beyond the issue of the Negev Bedouin.