On April 4th a report appeared on the Middle East page of the BBC News website under the title “Kerry calls for ‘reality check’ in Mid-East peace talks“. Based on remarks made by the US Secretary of State during a visit to Morocco, the article makes repeat use of the theme of equivalence promoted in previous recent coverage of the floundering talks between Israel and the PLO (see ‘related articles’ below) and is blighted by the same omission of crucial information which compromises audience understanding of the events which led to the current crisis. 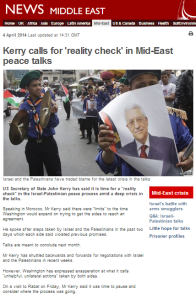 Throughout the report the BBC herds audiences towards an equivocal appraisal of the situation. The caption to the first image chosen to illustrate the report reads:

“Israel and the Palestinians have traded blame for the latest crisis in the talks”.

In the body of the article readers are told that:

“He [Kerry] spoke after steps taken by Israel and the Palestinians in the past two days which each side said violated previous promises.”

“However, Washington has expressed exasperation at what it calls “unhelpful, unilateral actions” taken by both sides.”

“The talks, which resumed in July under US auspices after a three-year hiatus, appeared to be on the point of breaking down this week, with Israel and the Palestinians blaming the other.” [all emphasis added]

In short, rather than fulfilling its role of building “a global understanding of international issues”, the BBC has again opted to avoid presenting audiences with the full picture.

The sequence of events leading up to the current impasse as presented by the BBC in this report begins as follows:

“The Palestinians were furious when Israel did not sanction the release of a fourth batch of Palestinian and Israeli-Arab prisoners, as agreed in principle under the terms on which the Palestinians returned to peace talks last year.”

The report does not clarify that the postponement of the fourth tranche of prisoner releases came after little if any progress had been made throughout eight months of negotiations – with direct talks having not taken place for months – and against the backdrop of the Palestinian Authority’s refusal (with Arab League backing) to agree to security arrangements in the Jordan Rift Valley and its refusal (again with Arab League support) to announce an end to future claims – and thereby an end to the conflict – by recognizing Israel as the Jewish state.

Although this report improves on previous ones by at least mentioning the potential inclusion of Arab-Israeli prisoners in the fourth tranche of prisoner releases, the BBC continues to avoid informing audiences of the fact that the inclusion of those particular prisoners had not been part of the agreement reached at the outset of the talks and that it was in fact a demand made by the Palestinian Authority. Once again, no effort is made to explain to readers the highly problematic aspects of this attempt by the PA to claim to represent citizens of another country and the clear interference in Israeli sovereignty that demand signifies. Neither is any effort made to explain to readers the potential political fallout for Israel’s coalition government which could be brought about by any release of Arab-Israeli prisoners.

The BBC’s suggestion that Israel reneged on a release of “Israeli-Arab prisoners, as agreed in principle” is contradicted by its own report from July 30th 2013 in which it was clearly stated that the identities of the prisoners scheduled for release – to be decided by Israel under the terms of the agreement – had not been publicized.

“Also on Sunday, the Israeli cabinet approved the release of 104 long-term Palestinian prisoners by 13 votes to seven.

The inmates are to be released in four stages over a number of months, linked to progress in the peace process.

Their identities have not been published, but according to reports they include those who have killed Israelis or Palestinian informers.”

Despite its having previously reported the fact that the prisoner releases were defined at the outset of this round of talks as being tied to their progress, the BBC’s ‘sequence’ in this report continues by opting to present that fact as an Israeli claim:

“Israel stressed that it had predicated any release on progress being made in the negotiations and on the Palestinians abiding by a commitment not to seek membership of international agencies.

Cabinet members also said they would block a release unless the Palestinians agreed to extend the talks beyond 29 April, the date by which the US had said it had hoped to reach a full agreement.”

Like its predecessors on the same topic, this report fails at this point to mention the supplementary concessions offered by Israel as an incentive to continue the talks after the April 29th deadline – including the release of an additional 400 prisoners and a commitment not to release any new building tenders for Judea & Samaria.

“The Palestinians however said they would not agree to extend the talks unless the prisoners were freed and accused Israel of reneging on the deal. […]

On Wednesday, Palestinian Authority President Mahmoud Abbas signed applications to join 15 international conventions which Palestinian officials said was a response to Israel’s failure to release the prisoners. Israel fears the Palestinians will use the treaties as a legal tool against it and to further enhance statehood which is subject to the negotiations.

It officially cancelled the prisoner release on Thursday in response to Mr Abbas’s move.”

At this point the report should have clarified that the talks’ ‘pre-nup’ included a specific commitment by the PA not to make such applications to the UN (as recently confirmed by the PA president’s spokesman) and it should also have  informed readers of the additional new demands presented by the Palestinian Authority as condition for the extension of talks – but no mention whatsoever of those new demands is made.

Clearly, so much crucial information is being systematically left outside the BBC’s framing of this story that audiences cannot hope to develop a fact-based coherent understanding of this particular international issue.

BBC already setting the scene for ME talks collapse

BBC continues to present an incomplete picture of Israel-PLO talks

BBC opts for equivalence in report on talks breakdown