In part one of this article we examined the level of compliance with BBC editorial guidelines on impartiality with regard to the images used to illustrate BBC News website content relating to Israel’s anti-terrorist fence and in part two we reviewed the impartiality of backgrounders on that subject. Part three will look at the impartiality of BBC news reports pertaining to the anti-terrorist fence which are accessible to visitors to the BBC News website as archive material.

In common with the backgrounders, many of the articles attempt to tick the impartiality box by using remarkably standard phrasing which fails to inform audiences of the available statistics which show the anti-terrorist fence’s proven track record of preventing attacks, instead presenting the easily provable Israeli point of view as subjective opinion. That opinion is then juxtaposed with the Palestinian one which is based on speculative claims. For example this article from 2010 states:

“Israel says the barrier was established to stop suicide bombers entering from the West Bank.

But Palestinians point to its route, winding deep into the West Bank around Israeli settlements – which are illegal under international law – and say it is a way to grab Palestinian territory.”

Of course the status of what the BBC erroneously terms “Palestinian territory” not already under the control of the Palestinian Authority – i.e. Area C – is to be determined in final status negotiations according to the terms of the Oslo Accords and realistic scenarios of the outcome of those negotiations, some of which pre-date the anti-terrorist fence (see for example here and here) foresee land swaps which would leave the main blocks of communities in Judea & Samaria in place.

Other slight variations on the theme can be seen here (from 2009):

“Israel says the system of barriers it is building around the West Bank, sometimes cutting deep into occupied territory, is a security measure, although Palestinians call it a land grab.” 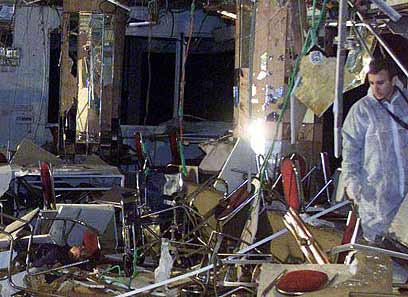 “Israel began building the West Bank barrier – part wall, part metal fence – in 2002. It said it was to stop suicide bombers, but Palestinians see the structure as a land grab.”

Palestinians argue that the barrier is in reality a land grab that also cuts them off from their families, hospitals and schools.”

“Israel says the barrier is essential to stop suicide bombers, but the Palestinians see it as an attempt to grab some of the most fertile West Bank areas before imposing its route as a border.”

“Israel says it began building the barrier in and around the occupied West Bank in 2002 to stop suicide bombers entering. But Palestinians claim it is a way to grab territory for illegal Israeli settlements.”

So as we see, for over a decade the BBC has been using one standard formula which is composed of “Israel says” – but never presents any hard facts or figures to explain to audiences why Israel says what it says. That is always followed by an accusation of a “land grab” of one sort or another, but inevitably fails to inform audiences that throughout that decade, no such “land grab” has occurred.

In fact, one has to go right back to July 2004 to find any attempt by a BBC journalist to present readers with more than that superficial formula and ironically it was Barbara Plett – also the writer of some of the most blatantly biased writing on the subject (see for example this article titled “Building ‘walls of their prison‘“) – who wrote:

“Military and security officials cite as evidence a sharp drop in Palestinian suicide bombings inside Israel. There have been only four so far this year compared to 17 last year and 46 in 2002 and a dramatic decrease in the number of Israeli casualties.

One is the completed section of the separation barrier in the northern part of the Israeli-occupied West Bank which seems to be stopping Palestinian attacks inside Israel.”

Clearly, the BBC is very comfortable with its standard antique mantra on the subject of the anti-terrorist fence, but that does not mean that it complies with BBC standards of impartiality as set out in its editorial guidelines.

efficiency – rather than the subjective presentation of “Israel says” – is clearly a failure to distinguish “opinion from fact” and a major “omission of an important perspective”.  The fact that a standard formula has been employed for over a decade also represents a failure to adhere to the demand for “impartiality over time”, presenting the same jaded “land grab” theme over a long period of years in which no such thing has happened.

As we have seen in this series of articles, neither the use of images, the various backgrounders nor the years of written articles on the subject of Israel’s anti-terrorist fence meet the professed BBC standards of impartiality. Clearly it is time for a serious review of the subject, including the weeding out of backgrounders not fit for purpose, the application of standards of impartiality to images and the presentation of some real facts on the subject – including realistic portrayal of the campaign of terror which led to the construction of the fence – rather than the standard mantras which the BBC has been feeding audiences for over ten years.

Does BBC reporting on Israel’s anti-terrorist fence meet standards of ‘due impartiality’? – Part 1

Does BBC reporting on Israel’s anti-terrorist fence meet standards of ‘due impartiality’? – Part 2

The politics of BBC approved terminology on Israel’s security fence