A BBC radio report on 'children' killed in Gaza 'protests' fails to tell all.

Hot on the heels of Paul Adams’ July 25threport from the Gaza Strip for Radio 4 came another report from the same location on the same radio station – this time from the BBC Jerusalem bureau’s Tom Bateman.

Aired in the July 27th edition of BBC Radio 4’s ‘World at One’, the report was introduced (from 23:12 here) by presenter Jonny Dymond using a decidedly unsubtle metaphor to commence promotion of some very overt framing. [emphasis in italics in the original, emphasis in bold added] 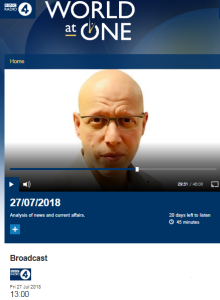 Dymond: “As depressing David and Goliath metaphors go, you don’t get much closer than the clashes between Israel and the Palestinians at the northern tip of the Gaza Strip. For 18 consecutive weekends now Palestinians – many of them children – have gathered to protest at the fence that separates Gaza from Israel: protests with rocks and burning tyres and balloons carrying flaming strips of cloth designed to set fire to nearby Israeli farmland. They have been confronted with live fire from the most sophisticated military in the region. At least 115 Palestinians have been killed in the protests since March and one Israeli soldier has been shot dead by Gaza-based militants. Amongst the Palestinians, 19 children have been killed and hundreds more injured. From Gaza, our Middle East correspondent Tom Bateman reports.”

Notably Dymond’s “David and Goliath” framing excluded all mention of the IEDs, grenades, petrol bombs and shootings which have also been an integral part of the violent rioting he euphemistically and uniformly called “protests”. Neither did he bother to inform listeners of the fact that a significant proportion of the Palestinians killed since March were linked to terror factions.

Bateman began his report with a visit to the father of a youth – reported by many other media outlets to be fifteen years old – who was shot on July 13th as he participated in violent rioting that included a grenade attack in which an Israeli soldier was injured. Notably that attack was completely excluded from Bateman’s account of those “protests”.

Bateman: “This is a road that runs parallel with the fence on the east side of the Gaza Strip. We’re just driving with the fence to our right. You can see Israeli fields and farmland on the other side. And this is an area where the sprawling suburbs of Gaza City almost meet the fence itself. I went to the home of Rami Helles. Two weeks ago his son Othman was shot dead by Israeli soldiers as he tried to climb the perimeter fence. Othman was 14 years old, among the large numbers of young people in Gaza attending the weekly protests. Why did he go to the fence?”

Voiceover Helles: “Because he loved his land, his country. He went like everyone else. After he was martyred – may his soul rest in peace – it turned out that he had been going every Friday. After he came back I used to ask him where he had been and he would say I was in the coffee shop or I was here or there.”

Naturally Bateman had no questions to  about the responsibility of the parents of “children” attending weekly violent riots organised by terror factions for months on end.

Bateman: “A BBC crew in Gaza was filming as Othman Helles, away from the fence, used a sling to throw a stone towards Israeli soldiers. A few people burned tyres. Later the 14 year-old walked alongside the fence, put a hand and a foot on it and pulled himself up about a foot off the ground. He was hit with a single shot to the chest. Nineteen of those killed since the end of March have been under the age of 18. The number of children with bullet wounds is more than 600 according to the UN’s humanitarian affairs agency [UN OCHA – Ed.] which bases its recent figures on those of Gaza’s health ministry.”

As usual, BBC audiences were not told that “Gaza’s health ministry” is run by the same terror group which co-organises this weekly agitprop and has an interest in inflating casualty figures for PR purposes.

Neither were they told that Hamas has been deliberately using youths to sabotage the border fence throughout the weeks of violent rioting and that among those under the age of 18 killed since the end of March were operatives with terror factions and some linked (e.g. by family) to such factions.

Bateman: “I mean many people might look at that footage and they will think simply that it was completely disproportionate.”

After noting that the circumstances of Othman Helles’ death would be investigated (as all such incidents are), Conricus went on to say:

Conricus: “We’ve had in the last week two events where sniper fire was conducted from the Gazan side towards Israeli troops. Two Israeli soldiers have been hit – one injured, one unfortunately killed a week ago – and that has been done using the cover of these so-called demonstrations.”

Those two events are the fatal shooting of Staff Sgt Aviv Levi on July 20th and the shooting of another soldier – drawn by youths gathered near the fence – on July 25th.

Bateman then visited a clinic:

Bateman: “At a center in Gaza City of the medical charity MSF they have a rehabilitation clinic.”

Bateman: “He said he was near the fence burning tyres on the 3rd of July. The soldiers shot him in the leg.”

Although the involvement of terror organisations including Hamas, the Palestinian Islamic Jihad and the DFLP in the organisation of the ‘Great Return March’ was known even before the events began, Bateman whitewashed them as “political factions”.

Bateman: “The protest camps are set well back from the fence, organised by a committee of political factions.”

Failing to clarify that the aim of the so-called ‘right of return’ is to eradicate Israel and avoiding the question of why there are no “protests” along Gaza’s border with Egypt, Bateman told listeners:

Bateman: “The focus has been on the Palestinian claim of a right of return to the land that is now Israel and on the blockade of Gaza by Israel and Egypt, which Israel says is for security reasons. The Israelis believe Hamas has used the protests to attempt militant attacks and threaten its population. I spoke to 17 year-old [name unintelligible]. He said three people had thrown petrol bombs towards the fence. He went to help the injured, he said, and was shot. He has had his right leg amputated. Now he is waiting for a prosthetic limb, for which he would need to travel to Turkey.”

Refraining from telling audiences who laid on buses, he continued:

Bateman: “Messages at the Mosques and buses laid on have boosted the protests. Why did the boys at the clinic go? Most told me simply they went like everyone else. One wanted to give Trump a message, he said, that Jerusalem is the capital of Palestine. Another spoke of supporting a Hamas leader attending. But Israel says children were used to distract its troops during the incident this week when an Israeli soldier was shot and wounded by Palestinian gunmen from the fence area.”

Hamad: “The main goal [of] this march; just to get attention of the international community to the miserable situation in Gaza.”

Bateman: “It’s not peaceful; it’s not all peaceful though is it? There have been, you know, Molotov cocktails, people trying to break the fence down, explosive devices placed at the fence.”

Hamad: “No, look I think I can say we control 99% of the march. Maybe there’s some [unintelligible] done by some individuals but this is not an excuse for Israel to kill people.”

Failing to clarify that most of the “ten Palestinians” he cited were Hamas operatives killed in strikes in response to massive rocket and mortar attacks against Israeli civilians, Bateman closed his report as follows:

Bateman: “The tension along the Gaza boundary has risen. There have been a series of military flare-ups in recent weeks. At least ten Palestinians have died in Israeli air strikes on militant sites. An Israeli soldier was shot dead and four civilians have been wounded in recent rocket attacks. Palestinians have been sending flaming kites and helium filled condoms to burn Israeli fields. The air is combustible. Gaza’s clinics will hope there are not more young patients coming in.”

The same report by Bateman was aired the following day – July 28th – in the afternoon edition of the BBC World Service radio programme ‘Newshour’ (from 36:29 here) and in the evening edition (from 30:06 here) of the same programme. Presenter Julian Marshall introduced it thus:

Marshall: “Tensions have escalated again in recent days between Israel and Hamas – the Islamist group which runs the Gaza Strip. It comes against a backdrop of Palestinian protests at Gaza’s perimeter fence, now in their 18th consecutive weekend. At least 115 Palestinians have been killed by Israeli troops during the protests since March. Another reportedly died of his injuries today. And one Israeli soldier has been shot dead by Gaza-based militants. Among the Palestinians killed are 19 children, with hundreds more injured – something that the UN has previously condemned.”

Obviously this widely promoted report from Tom Bateman fails to give BBC audiences – domestic and worldwide – the full range of information needed in order for them to understand Hamas’ cynical exploitation of the under-18s described as “children” in its weekly agitprop that is designed to prompt media coverage of exactly the type that Bateman has produced.

Instead, listeners heard a context lite “David and Goliath” story in which Palestinian “boys” and “children” who throw rocks, burn tyres and fly kites are “confronted with live fire from the most sophisticated military in the region” with results portrayed by the BBC’s reporter as “completely disproportionate”.

Ghazi Hamad was no doubt very pleased with this effort to “get attention of the international community”.