Surprisingly, this year the award does NOT go to the Guardian. 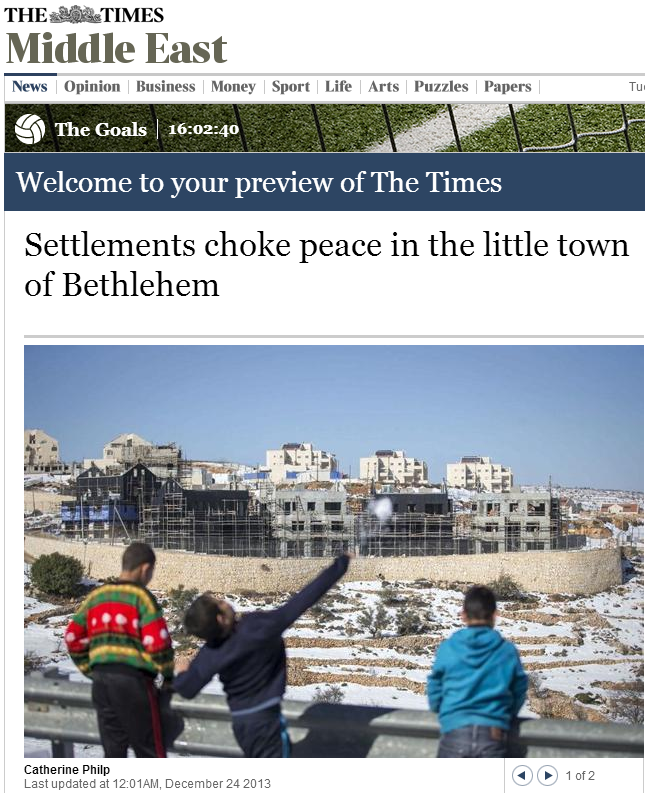 It goes to The Times for a story by Catherine Philp which is riddled with errors and distortions. (See our previous posts on Philp here and here.)

From a barren hill, the settlers look down on snowy Bethlehem. “Just look at all this nature,” rhapsodises Yehuda Nesha as he turns from the fabled biblical town towards the Judean hills. Should the settlers get their way, though, nature will soon be banished from this hill, replaced by the red roofs and golden stone walls of hundreds of new homes, the latest links in a chain of Jewish settlements encircling the Palestinian town of Bethlehem.

However, as this map by B’tselem demonstrates, Israeli settlements do NOT encircle Bethlehem. 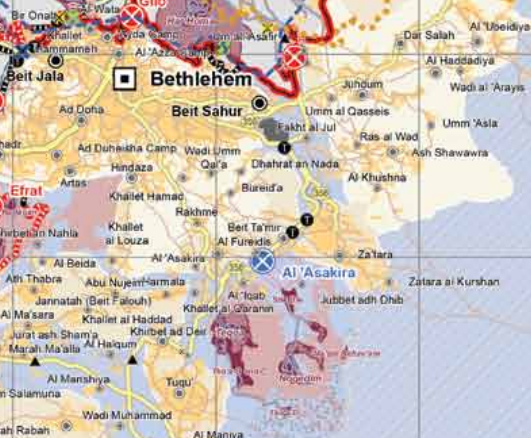 With little space left to expand, Bethlehem has become more densely populated than Gaza, despite the steady exodus of wealthier residents, mostly Christians, anxious to escape what the Palestinian President Mahmoud Abbas called “a choking reality”.

Interestingly, this exact claim was also advanced in a story by Harriet Sherwood last year, citing an unnamed Palestinian official.  But, as we demonstrated at the time, this too is false. According to the PA’s own statistics, the population density of the city of Bethlehem is 4,757 persons/km², which is LOWER than Gaza’s, which (per the CIA Fact World Book) is at 4,898 persons/km².

Who’s to blame for the Christian Exodus from Bethlehem?

Down in Beit Sahour, which is mostly Christian, residents of one housing development have been living under the threat of demolition for more than a decade since an Israeli court ruled its building illegal. The order was frozen but never lifted, leaving families in limbo, wondering if or when the bulldozers will arrive and where they will go if they do. “This is the only place left for us,” says William Sahouri, whose family has lived in the area for more than 300 years. “There are no lands to expand.”

He is one of seven brothers, but only three remain in Bethlehem. The other four have gone abroad, part of a migration that has seen Bethlehem’s Christian population fall from about 50 per cent to under a third.

In this year’s Christmas message, Mr Abbas highlighted the Christian exodus, lamenting “the sad fact that more Bethlehemites will be lighting their candles in Santiago de Chile, Chicago, San Pedro de Sula, Melbourne and Toronto than those in Bethlehem”.

Beyond her implication that Israel is to blame, Philp fails to seriously explain why the Christian population in the city has fallen.

In addition to demographic dynamics, such as higher Muslim birthrates, there is the widespread problem of Palestinian Christians being targeted for violence at the hands of Muslim extremists.  As reported in a detailed CAMERA analysis last year, Pastor Nihad Salman (who serves in Beit Jala, a Palestinian Christian town opposite Bethlehem) has testified extensively about Muslim hostility toward Christians.  Additionally, Dexter Van Zile, CAMERA’s Christian Media Analyst, interviewed Steven Khoury, assistant pastor at The First Baptist Church in Bethlehem, in a piece that was published in The Algemeiner. Khoury told Van Zile that anti-Christian animus has gotten worse in Bethlehem over the years, and that there is serious pressure placed on Christians in the West Bank to convert to Islam.

A Telegraph story in 2011 reported that Church leaders in the Holy Land had compiled a “dossier” of alleged incidents of abuse by ‘Islamic fundamentalists against Palestinian Christians, and accused the Palestinian Authority of doing nothing to stop the attacks.  According to the Telegraph, “the dossier includes a list of 140 cases of apparent land theft, in which Christians in the West Bank were allegedly forced off their lands, backed by corrupt [Palestinian] judicial officials.”

Remarkably, in 880 words written by the Times reporter about the fate of Christians in Bethlehem, there isn’t a single word about the problem of Islamist extremism. Nor does she note that the only country in the region where the Christian population is increasing is Israel.

Indeed, the fact that the only nation in the Middle East where Christians are flourishing just happens to be the sole place where radical Islam is not a serious threat is essential to understanding the fate of Christianity in that part of the world – vital context about contrasting values of tolerance in the region which Catherine Philp fails to provide.