The latest regional visit by the US Secretary of State prompted the publication on the BBC News website’s Middle East page of a written report titled “Kerry seeks ‘framework’ for Israeli-Palestinian peace” on January 1st and a filmed report titled “Kerry: ‘Progress’ towards peace agreement” (which also appeared on BBC television news programmes) on January 4th.

“US Secretary of State John Kerry is flying to the Middle East as he seeks to secure a “framework” for a final Israeli-Palestinian peace agreement.

He hoped to achieve consensus on core issues so progress could be made towards signing a comprehensive treaty by April, a senior US official said.

The issues include security, borders, Jerusalem and Palestinian refugees.”

Located to the right of that opening paragraph in which the BBC focuses readers’ attention on the subjects it has defined as “core issues” since July 2013, is a link to the BBC’s own backgrounder of the same title, which also appears as an additional link at the bottom of the article. 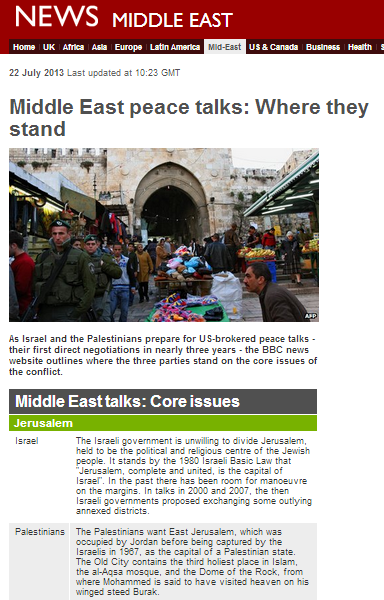 In that backgrounder the “core issues” defined by the BBC as being at the heart of the conflict the current talks are supposed to end are “Jerusalem”, “borders”, “settlements”, “refugees” and “security”.

Those five subjects are presented according to what the BBC perceives and wishes to promote as being the Israeli, Palestinian and American views of them, in language which leaves the reader with little doubt as to where to place the blame for the lack of progress in the 22 year-long search for peace.

For example, according to that presentation, Israel “is unwilling to divide Jerusalem, held to be the political and religious centre of the Jewish people”, whereas Palestinians “want East Jerusalem” which “contains the third holiest place in Islam, the al-Aqsa mosque” (with no debatable “held to be” about it). [all emphasis added]

Whilst the five issues defined by the BBC as “core issues” are undoubtedly important ones, they are by no means the entire story. No less crucial issues include the recognition of Israel as the Jewish state and the end to any future claims.

The recognition of Israel as the Jewish state does get a brief mention in the BBC’s backgrounder, under the heading “refugees” where it is stated:

“Israel rejects the idea that Palestinian refugees from previous wars should be allowed any “right of return” to their former homes. They say that this is a device to destroy the state of Israel by demography in order to establish a unitary state of Palestine. For that reason Mr Netanyahu has called for Israel to be recognised as a Jewish state.” […]

“They [the Palestinians] refuse to recognise the concept of Israel as a “Jewish state”, saying that this is unnecessary and that it ignores the Israeli-Arab citizens of Israel.”

However, the issue of Palestinian (and wider Arab) recognition of Israel as the Jewish state is an important one in itself and not only in connection with the subject of refugees. A lasting peace agreement cannot of course be brought about without recognition and acceptance of Israel’s existence in the region as an expression of the national rights of the Jewish people, along with an end to the kind of all too prevalent officially sanctioned incitement which encourages Palestinians (and others in the wider region) to continue to view Israel as “Arab land”.

The recognition of Israel as the Jewish state is hence critical to the other core issue completely ignored by the BBC: the end to any future claims. The compromises necessary for an agreement to come to fruition will be painful. Once again Israelis will have to give up their homes, livelihoods and land and the collective experience of the Gaza Strip withdrawal in 2005 has taught Israelis that technical solutions to issues of “settlements” and “borders” do not guarantee peace if the other side does not accept them as bringing an end to the conflict, as of course is the case with  Hamas, the Palestinian Islamic Jihad and other Palestinian factions.

The BBC’s focus on its chosen “core issues” tells only part of the story: it fails to inform audiences of the additional, less technical ones which present real challenges to the achievement of a lasting and final peace agreement and in doing so, fails to meet the public purpose of building “a global understanding of international issues”.