The Palestinian “refugee” problem is an issue this blog has explored on quite a few occasions, often in the context of pointing out UK media errors relating to the true number of actual refugees.

A case in point is a long article published on April 6 in The Observer (sister site of the Guardian) by incoming Jerusalem correspondent Peter Beaumont, titled ‘Middle East: does either side have the will to strive for peace?‘.  Though the nearly 2,000 word article is largely unproblematic, the print version included the following graphic which includes extremely inflated figures on “refugees”: 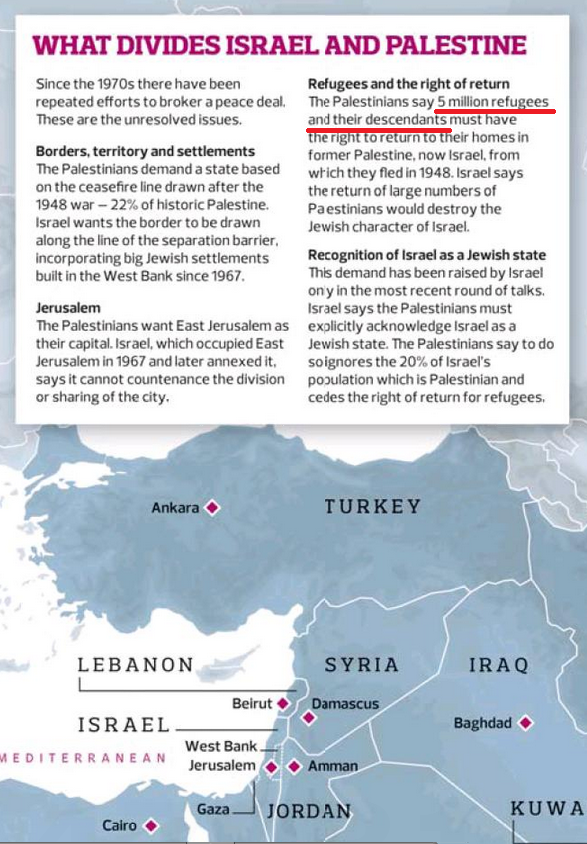 First, the wording of the passage (underlined in red) on “refugees” is quite confusing, as the words “5 million refugees and their descendants” could be understood as implying that there are ‘5 million Palestinian refugees’ from 1948, PLUS an additional number of descendants.

Alternately, it could be an attempt to acknowledge that not all of the “5 million” Palestinians who are regarded as refugees (per UNRWA’s bizarre formula) are actually refugees, but, rather, are the descendants of the original (unstated number of) refugees.  However, even assuming it’s the latter, this is extremely misleading, since readers would likely never imagine that there are only 30,000 or so actual Palestinian refugees from the 1948 War (out of the original 711,000) still alive – or less than 1 percent of the ‘5 million’ figure cited.

As we’ve noted previously, the 5 million figure (used by UNRWA) includes the children, grandchildren, and even great-grandchildren (ad infinitum) of Palestinian Arabs who may have once lived somewhere in Mandate Palestine, and includes even those who are citizens of other Arab countries (such as Jordan or Lebanon) as “refugees”.

Though such egregious distortions about the actual number of Palestinian refugees are ubiquitous throughout the UK media, we had at least one notable success when we prompted a correction last August in The Telegraph to a passage mirroring the language used by The Observer cited above.  After a series of communications with Telegraph editors, they agreed with our argument and our figures, and revised the original passage (which you can see here) thusly:

Even this passage isn’t perfect, because it fails to note how many Palestinian refugees from the 1948 War (of the original 700,000 or so) are actually still alive, but, in comparison to the Guardian, it at least represents an attempt to accurately represent this widely misunderstood issue.

Like Loading...
Tags from the story
1948 Arab–Israeli War, Guardian, Jerusalem, Middle East, Observer, Palestine, Palestinian people, Palestinian refugee, Peter Beaumont, Refugees, The Observer, The Telgegraph, United Nations Relief and Works Agency for Palestine Refugees in the Near East
Written By
Adam Levick
More from Adam Levick
A Twitterer, @one_uk, who describes him/herself as a Research Correspondent for the...
Read More