Nearly fourteen years have passed since the instigation of the second Intifada by the Palestinian Authority in the wake of failed negotiations with Israel. A major factor in whipping up fervour on the Palestinian street at the time was the Al Dura incident of September 30th 2000. Then, as in subsequent events such as the fabricated ‘Jenin massacre’ and more recently the Masharawi affair, the BBC was at the forefront of those media outlets which unquestioningly promoted and amplified the lethal narratives supplied by interested parties, with little or no regard for its general journalistic obligation to check facts and its particular commitment to BBC editorial guidelines on accuracy and impartiality.

Perhaps most disturbingly of all, in all three of the cases mentioned above (and others) there is no evidence to suggest that universally human considerations were taken into account regarding the likely effects of misleading and inaccurate media reports on the lives – literally – of persons associated with the group at which an accusatory finger was pointed by hasty journalists in a region in which the violent consequences of rumour spread like bush-fires.

On May 20th – just weeks after the latest round of failed negotiations came to its déjà vu end – the BBC News website published an article on its Middle East page titled “Video ‘shows shootings of Palestinian protesters’“. Notably, the BBC’s previously promoted and extremely problematic article on an Amnesty International report was one of the ‘related stories’ offered to readers together with that article. 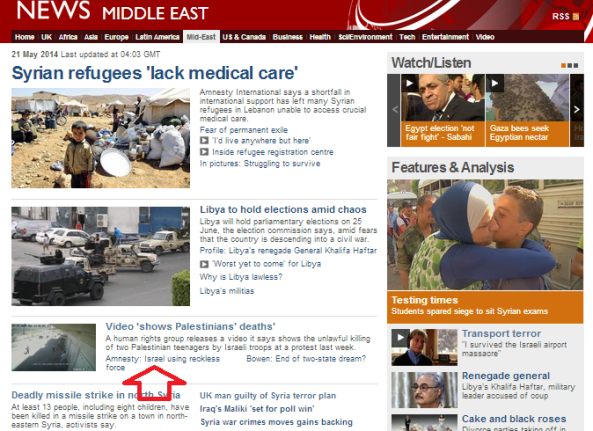 What really happened at Beitunia on May 15th to lead to the deaths of two Palestinian youths is as yet unknown and the incident is currently under investigation. What we do know, however, is that the edited video upon which the BBC article is based took five days to appear and that it was circulated and promoted by an organisation which the BBC misrepresents in the opening sentence of this report as a “human rights group”.

“A human rights group has released a video it says shows two teenage Palestinians being shot dead by Israeli security forces at a protest last week.”

Defence for Children International – Palestine (DCI- Pal) is a radical political NGO with an agenda which includes anti-Israel campaigning and support for the anti-peace BDS movement. Its website still promotes the myth of the ‘Jenin massacre’ and a member of its board of directors, Shawan Jabarin, allegedly has ties to the PFLP terror organization.

Later on in the BBC’s report, the executive director of DCI-Pal is quoted and his classification of rioting seventeen year-olds (although some sources report them as being older) as ‘children’ is promoted.

” “The images captured on video show unlawful killings where neither child presented a direct and immediate threat to life at the time of their shooting,” said Rifat Kassis, executive director of DCI-Palestine.”

Rifat Odeh Kassis in fact wears many different hats for his political campaigning.

“The director and founder of DCI-Pal is Rifat Odeh Kassis – another seasoned anti-Israel campaigner who is active in a number of organisations (some of which he founded), including OPGAI, The World Council of Churches, EAPPI, the Alternative Tourism Group, and the Alternative Information Centre (also known for links to the PFLP).  Kassis is the co-author of the notorious Kairos Document, which promotes BDS and suggests that Jewish sovereignty is an affront to God’s plan for humanity.”

What we also know about this incident is that later the same day, one of the youths killed was claimed by Hamas as one of its activists on its Al Aqsa TV station and that at their funerals, one was wrapped in a Hamas flag and the other in a Fatah flag. Hamas members featured prominently at the funerals and the subsequent protests and one of the youths was photographed beforehand wearing a Hamas flag and headband. The BBC neglects to provide audiences with that information.

As the BBC notes in its report: [emphasis added]

“No Israeli troops can be seen in the video, which begins with a youth throwing a stone from the end of a street, beside a row of shops.”

This BBC report does not, however, bother to inform readers that Israeli troops are far from the only ones who carry guns in that area and with the BBC having repeatedly failed in past months to adequately report the rise in Palestinian terrorism in Judea & Samaria, audiences will be unaware of that factor. 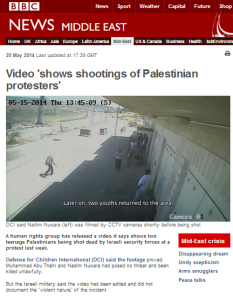 Neither does this BBC report inform readers of the fact (significant particularly in light of the recent Hamas-Fatah reconciliation deal) that the spokesman for the Palestinian security forces, Adnan al Damiri, told AFP that “…this prompts the [PA] leadership to seriously consider a halt to security coordination with the Israeli side”.

By the time the actual facts surrounding the deaths of the two youths in Beitunia on May 15th come to light, it will of course hardly matter. The symbiotic relationship between the media – BBC included – and political NGOs will have created and established a narrative which, like the past examples of the Al Dura case, the so-called ‘Jenin massacre’ and the Masharawi story, will remain etched in the minds of audiences (and available on the BBC News website for decades to come) regardless of what any investigation proves or disproves.

That is surely something which should be seriously considered by any responsible journalist before a report based upon so far evidence-free third-party claims and opaque edited video sequences is promoted to BBC audiences.

Where’s the BBC coverage? Journalists beaten up in Beitunia