Mishal Husain’s deferential and decidedly uninformative ‘interview’ with Hizballah’s Muhammad Fneish on November 13th was apparently the inspiration for an item on BBC Radio 5 Live’s Breakfast programme on the same day. 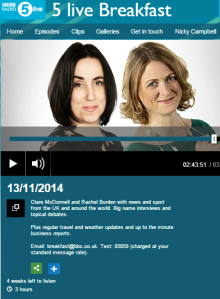 Presenter Rachel Burden’s introduction to the item (available here for a limited period of time from 02:39:40) began as follows:

“Now, the Lebanese militant group Hizballah has told the BBC that the fight against Islamic State has given it a common purpose with Western powers. In an interview with the BBC one of its leaders blamed IS for killing more Muslims than its longtime enemy Israel.”

Of course the implication that until ISIS came along Israel held some sort of record for killing Muslims is grossly inaccurate and misleading, but Burden made no attempt to clarify that fact to listeners – or to inform them of Hizballah’s terrorist designation – before introducing her interviewee; former British Ambassador to Libya, Sir Richard Dalton.

After a conversation about developments in Libya, Burden said:

“It’s interesting, isn’t it, what the Lebanese militant group Hizballah have told the BBC: that the fight against Islamic State has given it a common purpose with Western powers – it’s on the same side of a conflict as American forces for once. Is this just an extreme example of our enemy’s enemy being our friend and if it is, does it herald any possible rapprochement with the group and maybe a way of hope for the Israel-Palestine process – peace process?”

Why the topic of negotiations between Israel and the PLO was introduced into an item supposedly broadcast within the framework of a BBC special feature on Syria is unclear, but given that this was the second time in a matter of minutes that Burden had informed audiences that Hizballah had told the BBC that it now has “a common purpose” with Western powers, let’s take a closer look at the relevant segment of that interview.

Mishal Husein: “And do you therefore see those Western states as your allies then rather than your enemies, given the fact that you have a common fight at the moment?”

Fneish: “Sometimes common interests do cross, but not necessarily for the same goals. These Jihadi groups would not have thrived and expanded if it wasn’t for some policies by Western states like the United States, Britain and France and also the involvement of some regional states. […] For us, if there’s a convergence at the moment, it is the result of those states changing their positions and not because of common political goals.”

Clearly Burden’s interpretation of the Hizballah representative’s words does not accurately reflect what was said. Richard Dalton replied to her question as follows:

“I wouldn’t go as far as that, no. These are local conflicts with local dynamics. One of the reasons for example that Iran has got such a strong link with Hizballah in Lebanon is that it wishes to provide deterrents against attacks on Iran’s own territory. So this is not a simple matter of being able to count on a particular alliance for one purpose and then seeing that alliance extended for another. The fact is that the conflict between Israel and Palestine is currently getting worse, with a negotiated solution further off than ever – largely because of policies adopted in Israel. And the fact is unless Western policy changes towards Israel and towards the Palestine-Israel conflict as a whole, we’re not going to see progress on that issue just because of a temporary coincidence of interest in confronting Islamic State.” [emphasis added]

Rachel Burden made no attempt whatsoever to clarify or challenge Dalton’s pejorative and inaccurate allegations or to point out to listeners that the last round of negotiations failed because the Palestinian Authority chose to form a unity government with a terrorist organization dedicated to Israel’s destruction whilst knowing full well that act would bring an end to talks.

So much for the BBC’s claim to “enhance UK audiences’ awareness and understanding of international issues”.