If the Guardian’s Peter Beaumont had looked at financial reports from Breaking the Silence (BtS) he would have realized that the NGO is generously funded by foreign governments and foundations like the New Israel Fund and George Soros’s Open Society Institute, and, with a yearly income of roughly 3.7 million shekels, isn’t in need of the free PR he provided the group in a Guardian/Observer feature on June 8th.


Additionally, if you think our claim that the story represents ‘PR’ is over the top, keep in mind that Beaumont’s piece – largely consisting of ‘testimony’ from former Israeli soldiers alleging that “war crimes” and “violations of international law” are routinely committed by the IDF – runs at over 2800 words, and yet is almost entirely devoid of anything critical of the Israeli activists, or the organization which they represent.
Beaumont sets up his feature by informing us that “350 soldiers, politicians, journalists and activists” organized an event at Habima Square in Tel Aviv on June 6 – the anniversary, we are told, “of Israel’s occupation of Palestinian land in 1967” – to recite soldiers’ accounts “collected by the Israeli NGO Breaking the Silence“.
However, Naftali Balanson of NGO Monitor has persuasively argued that BtS tailors its “anecdotal and unverifiable accounts” of soldiers to fit their predetermined conclusion that it is Israeli policy to intimidate and instill “fear, and indiscriminate punishment [on] the Palestinian population.”  Balanson also noted that “many testimonies contradict this harsh claim, explicitly noting that incidents of individual misconduct were opposed and punished by officers”.
The group’s broader political message given to foreign audiences is, in the words of one BtS member,  ‘Israeli self-defense measures are pretexts for “terrorizing” Palestinians’. As another BtS member said: “We are the oppressors … We are creating the terror against us, basically.”
Though it’s next to impossible to fisk the soldier accounts published in the Guardian report, because they lack details necessary to research the specific incident they’re allegedly recounting, one account included by Beaumont (by an anonymous Sergeant from the Nablus Regional Brigade) is quite telling: 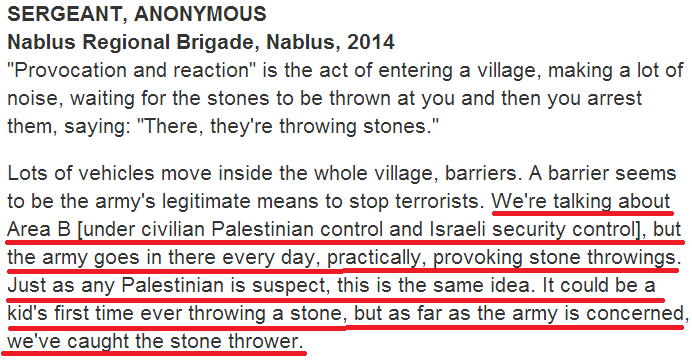 The logic is stunning.  According to the account, the IDF moved into Area B of the West Bank, an area in which they are permitted to operate per the Oslo Accords (as even the Guardian’s editor note in the [brackets] makes clear), likely to conduct a security or anti-terror operation, and the anonymous sergeant strangely accuses the army of “provoking [Palestinian] stone throwings”.
Beyond the specifics of the soldiers’ testimonies, however, and since Beaumont shows no interest in employing his professional skills (and honed journalistic skepticism) to critically scrutinize the group or its members in a manner he would do with almost any other story, here are a few questions for the NGO:
1.  How can BtS claim they’re a human rights organization when, by any measure, they have a clearly radical political agenda? For instance, BtS members Yonatan and Itamar Shapira were on the Jews for Justice for Palestinians boat “Irene” which sought to violate Israel’s legal (arms) blockade of Gaza.  Yonatan Shapira also once sprayed “Liberate all the ghettos” on to a wall nearby the actual Warsaw Ghetto where so many Jews lost their lives at the hands of the Nazis. As NGO Monitor’s president Gerald Steinberg argued: “BtS’s campaigns to discredit the IDF have turned the organization into an invaluable ally of those NGOs behind the “Durban Strategy” – with the explicit goal of “the complete international isolation” of Israel, using repeated accusations of “war crimes,” “genocide” and “apartheid.”
2.  Why does BtS court the international media rather than presenting its allegations through the normal military chain of command?
3.  Relatedly, why won’t BtS give any identifying details in their accounts – such as the sector, date or unit – so that the incident can be properly investigated by the military, the media or other interested parties?
4. Finally, in light of the fact that Israel is such a strong democracy, with a robust grassroots civil society, and a free, feisty and adversarial media, what “silence” is this foreign-funded group attempting to break?

Of course, Peter Beaumont wouldn’t dare ask such probing and critical questions, as he (as with so many of his Guardian colleagues) clearly sees his role as an advocate for the Palestinians – and their radical NGO allies – and not a journalist in the traditional sense of the word – one who’s committed to fair, balanced and accurate reporting.